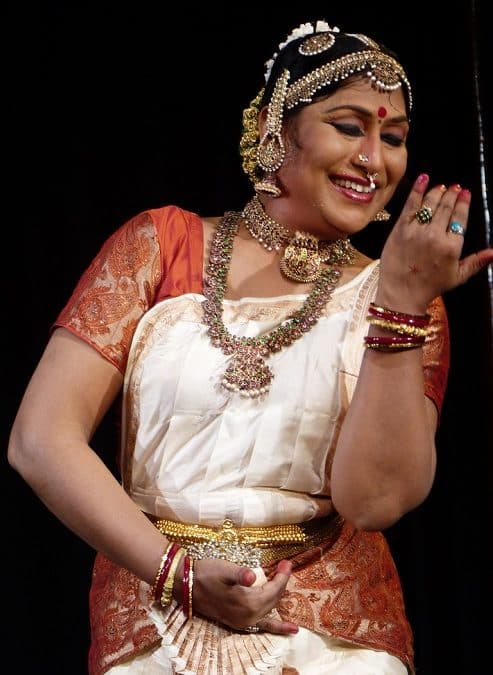 Reading Time: 4 minutes“I believe that dance is one of the most incredible ways to create connection to our bodies and, fundamentally, our inner selves.”

These were the words of Dr Narthaki Nataraj, Bharatanatyam dancer extraordinaire and activist for the transgender community of Tamil Nadu, at the end of her recent performance in Melbourne. Presented by Laya Vidhya Centre’s InConcert Music, the event was supported by InTouch Multicultural Centre against Family Violence, IndianCare, and Ashray Women’s Centre.

As a child, Dr Nataraj “couldn’t understand how she was different.” Eventually, her passionate interest in dance became fundamental to discovering and expressing her identity as a woman.

“And I think it was dance that chose me and gave me a means to express my femininity, which I was otherwise unable to. Dance was an effective tool to realise my womanhood and to express its subtleties,” she said.

Her confidence and conviction is born of years of pursuing rigorous dance training and a career as a dancer, which itself was the result of a highly tuned sense of her own self and what she wanted to achieve – simply, to be “the best.”

“We (herself and her lifelong friend and dance partner Shakti Bhaskar) have come up the hard way, faced so much scorn and censure, and lived in fear. People born like us generally take the easy way out and go into the oldest profession in the world. But we did not let the shame and rejection break our spirits. Our great determination to carve a name for ourselves as respected artists, has brought us where we are today.”

Dr Nataraj performed a traditional Tanjavur-style repertoire of Bharatanatyam pieces. According to her, the Tanjavur style (the style that predates the twentieth-century reconstruction of Bharatanatyam by Kalakshetra’s Rukmini Devi Arundale), is all about presenting the dance as a historical legacy, in its “purest form.”

She dances the exact choreography created by her guru, the renowned  Dr K P Kitappa Pillai, descendent of the Tanjore Quartet, and says that strict adherence to the Tanjore tradition is what audiences have come to anticipate in her performance.

An especial beauty of Dr Narthaki’s performance is her delicately yet intensely portrayed interplay of emotions between characters, and inner feelings of the heroine (nayika). This nayika bhava is, she told us, fascinatingly, also described as “Madhura bhakti…or a divine transgender state.”

Later, she told me, “Dance is a vehicle to uplift women, and womanhood is also a vehicle for dance.” By this, she explained, she means that she projects the Lasya, that is, feminine qualities through dance, but also uses her womanhood to project dance. And her real feeling of freedom comes in her ability to be whatever character is demanded of her – not just a nayika, or heroine, but also male heroes such as the god Shiva.

Shiva figures significantly in her philosophy of gender equality. In her speech at the end of her of performance, she said, “How can one ignore Shiva when the topic is of feminism? There is no better feminist than him.” For her, Shiva’s male-female form of Ardhanareeshwara “personifies” feminism.

She described female empowerment as a “coherence between your thoughts, feelings and actions.” Clearly, being who and how you truly are, with ease, is a key part of her philosophy. “(Women) should ask themselves. What do I know about myself, as a woman, how much am I aware of myself and my needs? Do I express myself comfortably? Joy is the natural state of your female nature.”

When it comes to gendered violence, she was refreshingly firm: “Men have to realise that women are not mere flesh and bone to be used for their physical pleasures.”

I asked whether she thinks things have improved for the transgender community in India, “The young generation, they can understand who we are, they are also the humans, they have the feelings we have.”

Nevertheless, she believes it will take a long, long time for her community to be accepted as equal. And certainly, there are very few in the transgender community who have been able to achieve the kind of career she has in the arts.

This career and its successes have, she emphatically states, been solely the result of her skill as a dancer and her determination to reach that level of skill. “I trust myself only. All I have, I got from my merit. I absolutely don’t like that “oh she’s a transgender, so we will encourage her dance or appreciate her.”

But Dr Nataraj has not just defined her own freedom in the way she describes herself and her journey. She has literally redefined the transgender community in Tamil Nadu. The way the community has been named has hitherto been solely derogatory: “Their name for us is some teasing word, you know. So I was not prepared to accept it. I respect myself and my inner thoughts.  I call myself as Thirunangai (literally God-Woman)”. In 2007, she had this term officially recognised by the government of Tamil Nadu.

Her independence and drive have also led her to establish Velliambalam Trust, an organisation that supports and creates opportunities for women of her community.
However, as she eloquently and characteristically declared, women going through what she went through to find and express her identity don’t need “sympathy” from the rest of the world.

“All they need is acceptance and support. At the end of the day, I love myself and am happy with my life. Which is where my feminism lies.”