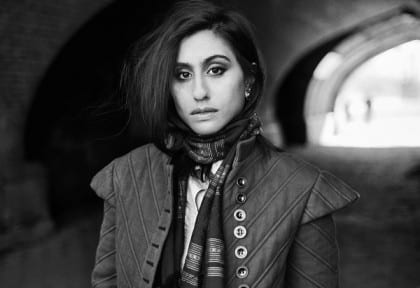 She was named after Durga, the sister in Satyajit Ray’s Pather Panchali. At Starbucks, she often avoids giving out her name, which has been contorted to Durva, Jerga, even Derika, and likes to keep it to “Just D”. The weight of her name and identity is carried in a gold ring embossed with a D, passed down to her through a lineage of her women, her mother, grandmother, great grandmother – Dolores, Dulcie and Daisy – on whose shoulders she lives and decodes herself a little every day.

A first-generation kid born in Canada to an Anglo-Indian mother and a Bengali father, Bose muses in her essay ‘D As In’ that “First-generation kids are the personification of deja-vu. It’s as if you have inherited not just your family’s knotted DNA but also the DNA acquired from their move to a new land, from veritable mileage, from the energy it took your parents to reestablish their lives.”
Writing in first person often eschews her. She is conscious that her “I” may not be able to express and contain all the fragments and contradictions in herself and the other selves of her that are yet undiscovered.
In her collection of essays, Too Much and Not The Mood (a phrase borrowed from Virginia Woolf from A Writer’s Diary describing how tired she was of editing her writing to please readers), even Bose is conscious of this constant, mindless self-deletion. Her essays, however, trace this self-deletion and document her subconscious, in turn, preserving her fragmented identities.
Her first inclination is to let ideas sit and then slowly outpace her. Talking to author Australian Maria Tumarkin at the Sydney Writers’ Festival this year, she says, “Writing is unconscious for me; it gives you a moment to pause and meditate. The process though is very chaotic.”
She claims to be a fiction writer writing non-fiction. And rightly so, for her sentences are long and lyrical, like her thoughts full of memories of lives lived by her parents and her 29-year-old heart that beats tirelessly as she curates her “heart museum” in one of her essays bearing the same title.
Her essays linger on like poetry. Her images of her parents sitting at their kitchen island and her longing for that comfort zone, and yet the need for her to live alone, are witness to the identities of which she is trying to make sense.

Of the act and choice of living alone, she remarks that it makes her find interest in her own story where she repeats the same actions every day, rearranging them as and when she likes. She is fickle, difficult, thoughtful and often revels in her invisibility. Invisibility makes her invincible inside.
Appearing in two sessions Difficult Women and Advice from Nasty Women to talk about women and feminism, her women are the kind who derive power from remaining in the background, from their smallness and the choice of invisibility. They are not afraid of changing their minds and they do that often. They enjoy emotional elasticity, levity of the mind.
She opens the essay titled “The Girl” with “the girl you want does not exist”. Because this girl is her own finding and lives in her little amusements, sensitivity and comfort zones. She only accepts hugs from furniture and throw cushions. She rests her face against cold marble surfaces. She moves at the pace of someone gathering dirty laundry, inspecting smells and stains or tears. “She is not the one for accomplishing anything fast. You yearn for her vulnerability, which you believe comes complimentary, like peanuts on a flight. In a restaurant with wall-length bistro-antiqued mirrors, even when she’s looking at you, she’s looking just beyond you – at her reflection.”
Her essays are restless yet meditative, and an incredible check on all the mindless self-deletion and appropriation we engage in every day in order to fit in. “Be difficult, stay difficult and do not apologise for it” is what I take for me from her musings, besides the acute need for listening and mastering the act of it.