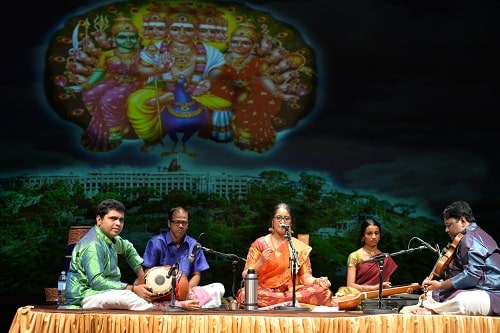 Aneka Srinivasan’s vocal arangetram was a grand event, held at the Karralyka Theatre on 7 March. Young Anekha is a student of Smt Jayashree Ramachandran, and has been impressing audiences with her performances in various concerts over the years.

Aneka began the evening impressively with a kriti in raga Khamas, her voice strong and clear, reverberating and filling the large hall with her presence. She prefaced it with a short alapana, delivered sharply and melodiously, making the audience sit up and listen. This was followed by the kriti Tulasidhara, which got the full treatment, embellished as she did it, with kalapana swaras. The popular kriti Janani in Riti Gowla was rendered with finesse and Aneka moved the audience with the clarity of her delivery, and bhava or emotion. The kalpana swaras that followed the kriti showed her skill and mastery of the Carnatic raga.

Nekkurugi in Abhogi, a popular Tamil composition, was a lighter interlude, before the rendition of the ragam-tanam-pallavi, the marker of any solo debut performance. The final shorter musical pieces including a bhajan and tillana, were all rendered beautifully.

Aneka gave a polished performance, and sang with aplomb for three hours without a break, and her voice did not falter or show fatigue. She showcased her classical music skills superbly, interacting with the accompanists, mixing up the music to hold the audience’s attention, and using her voice dextrously. The programme demonstrated Smt Jayashree Ramachandran’s impeccable training as well as Aneka’s superior abilities as a Carnatic musician.

The accompanists from India – all accomplished artistes – gave Aneka wonderful support without overshadowing her: violinist B Ananthakrishnan, Arjun Ganesh on the mrudangam; and N Guruprasad on the ghatam.