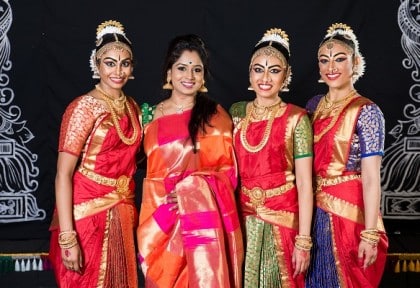 Adelaide’s Indian community were given a fantastic New Year cultural treat by three of its favourite daughters – Lakshmi, Nithya and Sarveshinee – who held their joint Bharatanatyam arrangetram at the Westminster High School auditorium.

The fact that this arrangetram (debut) had been on the anvil for over a year was apparent from the level of organisation in every aspect from the moment the invited guests entered the hall. The huge hall was filled to capacity with members of Indian, Sri Lankan and Australian communities, easily the largest audience I had seen for an event of this kind.
The length their families had gone to make this a momentous event for their daughters was evident by the fact they had invited the entire team of supporting artistes –  singer, instrumentalists and their earlier day dance teachers – from Singapore to give a stamp of authenticity to the arrangetram. Since their first dance teachers – Jayaletchimi Raman of Perth and Adelaide’s well-known Jayanti Natarajan – are products of Chennai Kalashetra, an internationally acclaimed academy, its style was writ all over the performance. Their present guru Harnie Kumaraguru trained by her mother Suganthi and aunt Jayanthi Kesavans, has an indirect link to Kalashetra too.

The moment the vocalist Aditi Gopinath, also a Kalashetra student, sang the first line, there was every indication the audience was in for a treat. Her lilting voice was simply mesmerising with her accompanying violinist and mridangist equal to the task.
Lakshmi, Nithya and Sarveshinee started the afternoon program with the traditional invocation to Lord Ganesha with a slokam. They followed it up with Jathiswaram, a purely technical piece without any lyrics illustrating the complexity and dexterity of the dance movements. The next item Varnam was a composition by Papanasam Sivan Mayam edho swamy on Lord Muruga, a slow tempo song. Being the central piece of the repertoire, it combined all the technical elements of nritta (movements) and nrithya (expression) and the trio showed all their artistic skills learnt over the years of training.

After a musical interlude on violin, it was the turn of solo performance by the dancers. The first item, performed by Sarveshinee Pillay was Shiva panchakshara sostram composed by Adi Sankaracharya in Sanskrit, a narrative glorifying Lord Shiva. Lakshmi Sriskandaraja chose Nee matale javali, rendered in raga Poorvi kalyani depicting an angry nayaki sarcastically recounting the empty promises of her suitor. The last solo, by Nithya Othayakumar, a padam on Durga in raga Revathi was in praise of Goddess Durga, the eternal mother and the all-powerful sakthi.
After their solo, the three dancers came together again for the concluding piece Thillana, a  joyous display of pure dance where rhythmic patterns are woven together with salutation to a  particular deity, in this case Bhuvaneswari, queen of the universe.

Chief guest Kris Hanna, Mayor of the local Marion Council, in his brief speech, portrayed the place of Bharatanatyam on the Indian cultural fabric with impressive insight. Stephen McManis deserves credit for his brilliant photographs and design of the classy brochure on the programme, although the texts were very wordy and repetitive, as was the vote of thanks segment – the only flaws in a splendid 90-minute performance.

It takes hours of hard work and years of training, as in other artistic endeavours, to reach a level to present a public performance for a large audience. The girls did an admirable job. What is even more amazing about these young ladies is their professional achievement – Lakshmi is a psychologist by training, Nithya an accountant and mum of a toddler, and Sarveshinee has just obtained her medical degree.
A double delight to their parents, families and friends, and they presented a triple treat to an admiring Adelaide audience.