Decolonising our arts and minds 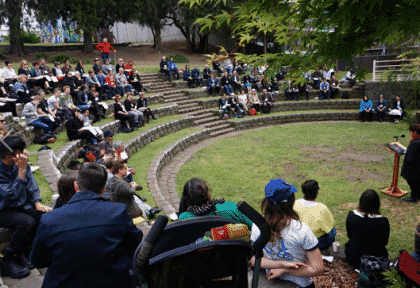 It’s time the Indian community acknowledged First Peoples’ ownership of the land, and decolonised our perspective on arts practice

Aunty Carolyn Briggs, Boonwurrung elder from Victoria, is telling us a story.
“At the time of the first European settlement, this area was occupied by the Yalukit-Willam clan. It is now over 180 years since the Europeans have entered our country. They came up on our sacred river, known as the Birrarung…” She speaks slowly, firmly. She is a keeper of the history and genealogies of her people. She is welcoming us to the country upon which we have all gathered, in the suburb now known as Footscray in Melbourne.
Her story is an important one, for it is the story of the land on which we stand. She is telling us about ownership, sacred ground, and most of all, respect. “Respecting sacred ground. We should all acknowledge the sacred ground on which we stand…”

She says the creator of the Boonwurrung, Bunjil, taught them to always welcome guests. But the guests must first promise two things: one, not to harm the land, and two, not to harm the children. This is where it gets complicated… and yet very simple as well. Because there is no denying that the earliest ‘guests’ to this land, whose arrival eventually led to this place that we call the Commonwealth of Australia, a nation-state, a ‘modern’ state, did not make, and certainly didn’t keep, those promises. And that we who have come as later guests, have ourselves in large part ignored the original ownership and sanctity that beat beneath our feet as we walk and prosper in ‘our’ new country.
The place was Footscray  Community Arts Centre, and the event was Day 1 of Arts Front, an extraordinary, three-day, physical and virtual gathering of artists, arts workers, and art producers from all over the country. An initiative of Feral Arts, the aim was to develop a shared vision for arts and culture in 2030.
This first day was in fact designed by Arts Front’s First Peoples Steering Committee, who put to us two, intertwined questions to discuss:
How do we put First Peoples at the centre of arts practice?
How do we decolonise ourselves so as to decolonise this practice?
It’s worth noting at this point that there were exactly five Indians (including myself) in the audience. And we combined with a group representing Peril magazine to form the only meagre cohort of Asian artists, in a sea of Western practitioners. Before the First Peoples delegation came in, people of colour were barely visible.
As formerly colonised people of colour, Indians in Australia share, to a certain degree, in the marginalisation of views, practices, languages and histories that is the everyday reality of the First Australians. And yet we also distance ourselves as a community from this kind of post-colonial understanding of our place in Australia. We stay insular, cultural, even exotic. But most importantly, we don’t recognise the privilege inherent in our being able to express our cultural identities at all, and to practice our arts free, in a superficial sense at least, of the colonial gaze. This is not the experience of Indigenous Australians, for whom decolonisation continues to be an agonisingly, unfairly slow process. The First Peoples Committee forced us to reckon with the urgency of this task of putting them back into the centre of arts policy.

To not do so, we were told frankly, is to erase Indigenous culture, and Indigenous peoples themselves.

To take a simple but powerful example of putting First Peoples at the centre: the first activity of the day was an introduction activity, where everyone in the room had to begin their introduction with the name of the traditional owners of the land that they lived or worked on. Many people already knew, others said they would have to look it up. Just doing this exercise, though, altered the atmosphere, and changed the picture. For here was what Aunty Carolyn was speaking of, given its rightful place: sacred ground, ownership, respect.
It is still rare for us as an Indian community to acknowledge the traditional owners of the land upon which we meet for our many concerts, festivals, celebrations. Furthermore, we view the mainstream arts space, and our position in relation to it, through a lens that misses the arts practice of traditional owners. It is time we understand that to not acknowledge them speaks to a lack of acknowledgement of our own colonisation, and, consequently, a lack of respect for the histories of Indigenous Australians. Histories that still permeate their lives today.
It is also time to come out from our self-enclosure in the “cultural” space, and move forward, with organisations like Feral Arts, to envision a new future for the arts in Australia. A decolonised future. A future that respects sacred ground.