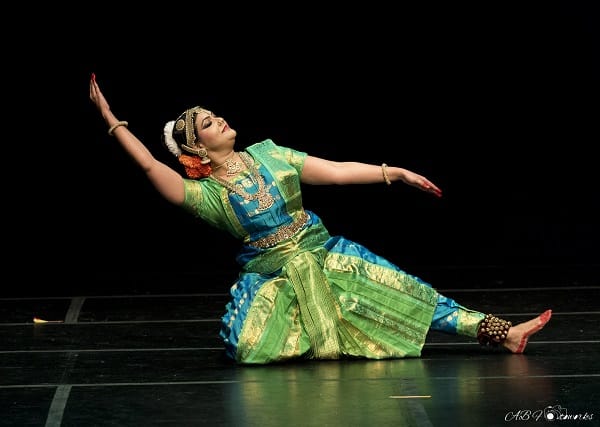 Number one: The entire supporting orchestra was made up of second-generation Carnatic musicians, with Arjun Puveendran on vocal, Anita Das on violin, Kasthuri Sahathevan on veena, and Venkat Ramakrishnan on mridangam. The group performs regularly together, and the members’ camaraderie and enjoyment in working together showed. It’s certainly the first time I’ve seen an arangetram supported only by younger artists, and I sensed, with a bit of pride, the smell of a new era in Melbourne’s Carnatic music scene.
Number two: The program was unusual from the very beginning. The opening item was an invocation, not to the god Ganesh or the directions, or another ‘main’ Hindu deity, as per usual, but to the water goddess Ganga, as a display of the ‘nature and variety of water.’ A beautiful, dynamic piece in the Hindustani raga Puriya Dhanashree, it depicted the goddess’s strength as well as her beauty.

Number three: Quite a few of the pieces chosen reached well beyond the standard narrative scope of arangetrams. The music for Divya’s varnam – the main and most elaborate piece of the Bharatanatyam repertoire – was especially composed by Mohan Ayyar of Sydney. Prior to the piece, Mohan came on stage to discuss the process of composing music for dance – he spoke, for example, about selecting raga Surutti for the piece because of its calming qualities, and the fact that as a ‘rakhti’ raga, it gives more scope for the dancer to elaborate.
The varnam’s subject was the moon, and mythological/traditional explanations for its different phases. Furthermore, the first story chosen was, in fact, a Dreamtime story from Indigenous Australian culture (we were not told which specific nation the story comes from). While the attempt to incorporate the lore of the First Peoples was laudable, I couldn’t help being a little disturbed by the story chosen, which had that classic misogynist plot found across cultures: woman makes a fatal mistake, and is killed for it. I couldn’t help wondering what an Indigenous woman would think of this story.
The jathis chosen for the varnam were lilting and complex, a pleasure to listen to and watch. Divya proved how skilled she is in all elements of the dance, with her precision of hands and arms, her mobile expressions, and her fluid acting.

Number four: The arangetram addressed a vital contemporary issue, the detainment of refugees on Manus Island by the Australian government. The piece, ‘Fading’, was based on the experience of a real female asylum seeker, ‘Sujatha’, from Sri Lanka, detained on Manus for two years. It was without a doubt the standout piece of the arangetram. Divya performed the piece, composed for cello, harp and vocals by Fiona Mackay, who accompanied on cello and vocals with Nola Mackay on Celtic harp. It explored Sujatha’s remembrance of going out in the rain back home in Sri Lanka, the joy of the memory, and the painful, heartbreaking realisation of her inability to reach the rain in captivity. The music and lyrics eloquently translated Sujatha’s fears of ‘losing a part of herself’ and ‘forgetting her name’:
Am I really here?
And do I know my name?
Will I ever feel
Complete and safe again?
It was also the first time I have seen Bharatayanatyam choreography melding effortlessly with Western classical music.

Number five: Female sexual desire was mentioned on stage! In the padam to lord Shiva, Pillai made a point of speaking about how the protagonist of the piece is, in fact, a woman, and her love for the god is not merely spiritual – she desires him bodily. This was another first – usually the sexuality of padams is skirted around or made entirely incorporeal, and exclusively devotional.
Last thoughts: Govind Pillai curated a diverse and thoughtfully crafted program, which looked forward to the future, and was personalised to his time and place. It was no mean feat, and one that was pulled off with immense skill by Divya, and the accompanying orchestra.
Welcome to the new era.