Dancing to the rhythm of her heart 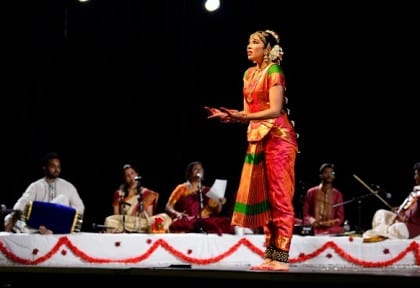 A personal development experience: that’s how this debutante Vaanie Krishnan describes her arrangetram

You can do anything if you set your mind to it.
This, declares Vaanie Krishnan, is the core learning that she took away from the experience of presenting her solo debut performance, the arrangetram, recently.

Oh, and also, that it takes an entire community for one person to achieve a goal!
Vaanie’s Bharatanatyam arrangetram was held on 9 July at the Science Theatre, UNSW as she showcased her commitment to the ancient art form.
Presenting a traditional repertoire in the first half with ‘Ganesha kauthuvam’, ‘Jathiswaram’ in Kanada and a ‘Varnam’ in Neelambari on Lord Muruga, a challenge to the resilience of any dancer, Vaanie explored the many nuances of the classical arts.
“I guess the first thing that I learnt was how to listen to your body, and that you need to treat it with respect,” reflected Vaanie, and this attitude probably aided the dancer to flow with the music. “You need to treat yourself like an athlete. That’s exactly what I did, and the longer that you train, the more time you give your body to adapt the better it will present itself.”
She went on, “When they say practice makes perfect, they really mean it. Every time I did it I changed something slightly or tried something new, and it became much more natural to me.”
This no doubt helped her to internalise and enhance her presentation of the ideas in the ‘Varnam’, which elaborated on the stories of Lord Muruga vanquishing the demons in disguise and in turn disguising as an old man to win the heart of the gypsy princess Valli. The sprightly peacock like movements in the second half, (Adum mayil meedu va, azhaga muruga ni) were beautifully incorporated in Padma Balakumar’s choreography.

The second half saw Vaanie exploring and creating images through sound and movement, the duality of existence merging into oneness. The power that drives all living beings is common to many ancient cultures around the world, be it the Yin and Yang of the Far East or the Advaita philosophy of Hinduism where Shiva and Shakthi merge into one. This subtle dynamism was presented in the ‘Ardhanareeshwara stotram’ bringing out the tandava and lasya aspects of dance. Intense storytelling portraying the plight of Karna who on the night before entering the battlefield is confronted by his birth mother who he meets for the first time, who is also the mother of his enemies the Pandavas, gave Vaanie a blank canvas to paint a tableau of conflict. The musicians Prema Anadakrishnan with her singing and Sanjay Ramaswamy with his vocal narration heightened the intense expression presented by Vaanie.
“Art reminds me more and more of how complex human beings are as I experienced with the Karna piece,” reflected Vaanie. “What is the greater good?”
The entire experience was very spiritual but also introspective; the idea that good and evil aren’t black and white, and that the root of all evil usually comes from a place of pain and desperation, was highlighted.
The beauty of Goddess Kamakshi in Kanchadalayadakshi and the raas lila of Lord Krishna in Brindavana Nilaye further augmented the concept of the graceful and the gallant that pervades the universe. The performance concluded with a ‘Thillana’ in Madhuvanti. “Some of the most profound, inspiring and touching responses to the arrangetram that I received were from people that had never experienced one before and without knowing the language or the traditions felt incredibly connected to a story or a song,” shared Vaanie. “Knowing that I have been able to do that to even a few people, was the biggest reward I could have ever received.”

Accompanying for dance demands a great deal of creativity and hard yards along the way, though one may perceive otherwise. The music has to embellish every move of the dancer, and orchestration plays a crucial role. Prema Anadakrishnan and Sanjay Ramaswamy on lead vocals, with Balaji Jagannadhan on the violin, Janakan Suthanthiraraj on the mridangam and Venkhatesh on the flute, all eminent musicians in their own right, were sensitive and receptive to the mood and mental frame of the dancer, energising every movement presented by Vaanie.
Vaanie expressed her deep sense of gratitude mentioning her guru Padma Balakumar and the musicians that supported her all the way, her parents and family that acted as a sounding board encouraging honest discussion. “I don’t think I’ve ever done anything this hard in my life,” summed up Vaanie. “It’s been a great personal development experience and I couldn’t have done it without the people around me.”
There’s no doubt this milestone experience reinforced her belief in herself, and the realisation that one has to surrender completely to the artform.