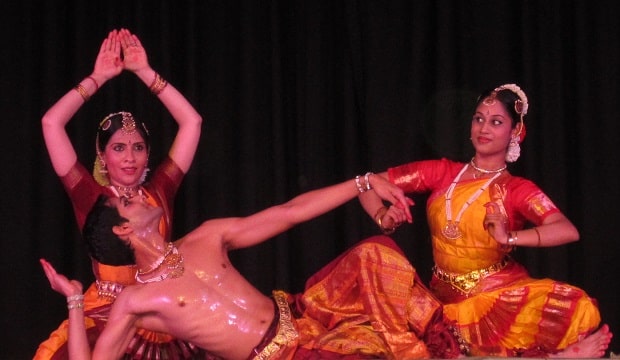 Hamsa Venkat has done it again. Having successfully infused the classical Indian dance scene in Sydney with new ventures, freshness and enthusiasm, her latest production Prana was another breath of fresh air.

A bouquet of dance items contributing to the theme of prana, or life force, three of Hamsa’s students Vidya Gokul, Priya Murali and Govind Pillai performed in this presentation.

There was great drama in the item Ahalya Moksha, based on the well-known story of Ahalya who is turned into stone by her husband, the sage Gauthama, angry at her dalliance with Lord Indra. It is left for Rama to place a foot on the stone that is Ahalya, and bring her back to her form. Dancer Vidya Gokul’s interpretation of Ahalya was simply astounding, especially as it was performed to instrumental music only, provided by the hugely talented Mohan Ayyar on synthesiser. The absence of vocals did not seem to matter at all, with the music was actually heightening the moods in this tale. Vidya particularly excelled in the moments depicting the wrath of Gauthama and the joy of Ahalya as she regained her physical form.

The Krishna leela Jaganmohanane Krishna was a total treat to the audience. This celebrated kriti in Kannada speaks of the three great episodes, the Lord begging Bali to give him three “feet” of land and thus grant him moksha; Kalinga Mardhana by Krishna and the deceitful play of chess by Duryodhana with Dharamaraya, and Draupadi’s vastraharana and Krishna’s intervention to give her Akshaya Vasana. Each of these episodes is symbolic and holds deep significance. Lyrics presented in pleasing ragas by Krishna, nattuvanga by Hamsa, and the clever mix of nritya and abhinaya by all the three dancers elevated the experience. There was a quick show of Dashavatara as well. In the Bali episode, Ondu padava bhoomiya meloori, ondu padadi gaganavanaledu made for fantastic abhinaya.  Following this, Govind gave a pleasing portrayal of Kalinga Mardhana. In the deceitful chess episode, we saw a good interplay of light, bringing out the expression on the faces of dancers.

Confluence of the jeevathma and the paramathma became the theme for Joolathi Radha presented by Vidya and Govind.  Radha and Krishna are eternal lovers; there is no end to their playful activity. We saw some beautiful poses of Radha and Krishna in this item. The Abhinaya brought out the love theme effectively. The swing action enacted and light display with colour changes added to the beauty of the presentation.

Brochevarevarura by Vidya was wonderfully expressive, especially for the line Seetahapathe, napai neekabhimanamu leda? In the following item Shakti Swaroopam (Durge Durge), roudra was oozing out of every movement of Govind. Indeed, one felt, “Durge is really blood thirsty”.

Music is an essential part of dance. In this respect Krishna Ramarathinam proved that he is a mature singer for dance. His range and modulation were both very effective. One should be pleased to note that he is born and brought up in Sydney. The other musicians too did an admirable job.

What was important was that the performance took the audience away from the Sydney surroundings to some hyperspace, one of divinity, as art always should. The dances were so beautiful that the language of the lyrics seemed to be no barrier to the artistic experience.