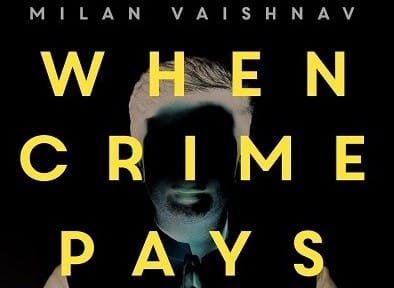 Milan Vaishnav’s new book When Crime Pays: Money and Muscle in Indian Politics (Yale University Press and Harper Collins India, January 2017) is a superb analysis of the nexus between crime and politics in India. Vaishnav has studied the symbiotic relationship between money and muscle on the one hand, and political power on the other; he set out to delve and explain how widespread crime and impropriety co-exist in India alongside free and fair democratic elections; and to understand why voters readily forgive politicians and look away from the crimes they perpetrate, and indeed, elect and re-elect them.

Using a database of candidates’ self-disclosures, which the Election Commission has maintained since 2003, Vaishnav crunches data from nearly 60,000 candidates spread across 35 state elections and two national elections. He supplements his desk research with fieldwork in India spanning over seven years where he conducts hundreds of interviews with various stakeholders in the system. The final result of all this academic diligence is a superb, candid and devastatingly honest book on politics in India – not as it is taught in universities or academia.
Vaishnav, Carnegie Endowment scholar, tracks the disturbing and distressing rise of criminal-politicians in India: Indian politicians who have been charged with or convicted of serious crimes are three times more likely to win parliamentary elections than those who have not! What makes these murderers, rapists, blackmailers, thieves and kidnappers tick? Vaishnav tries to explain this puzzling phenomenon in the book. To understand the motivation of criminal candidates in standing for elections and of voters in electing them, Vaishnav uses the framework of an electoral marketplace. Writing about the supply side of the criminal politicians’ market, the author contends that it was the weakening of the Congress party and a growing assertiveness in the previously marginalised groups that initially led to strong linkages between criminals and politicians.
In recent times, however, we have the phenomenon of criminals themselves turning into politicians and running for elections. Why and how did this happen? Vaishnav uses the concept of ‘vertical integration’ to explain it: it is a system whereby criminals substitute market exchange with politicians by internal organisation (becoming politicians themselves).  “By directly contesting elections, criminals could reduce the uncertainty associated with negotiating (and renegotiating) contracts,” says the author. Criminals thus join politics for self-preservation, protection, and the potential financial benefits they stand to gain by holding office.
The supply of criminal politicians cannot, however, be explained without understanding the demand side of the equation. The demand for criminal politicians by political parties can be understood on the basis of the soaring costs of election campaigns, which parties are unable to afford. Therefore, parties increasingly look for candidates who not only self-finance their campaigns, but also add to the party coffers and line the pockets of party elites. Why do voters elect these criminal politicians? Voter ignorance, he found, was not a compelling explanation of voter behaviour. For starters, candidates who have outlaw reputations often make a great show of highlighting their criminal reputations. Far from hiding them, they are often worn as a badge of honour. Voters consciously elect such candidates for their ability to “get things done”. In the face of a weak rule of law and salient social divisions, the criminality of candidates gains credibility among voters, who rely on criminal politicians to protect their interests and to act like the crutch that helps them “navigate a system that gives them so little access in the first place”.


Clearly, the amalgamation of criminality and politics has serious implications for society. Constituencies represented by crooks suffer economically. So what should be done to break this equilibrium that the market for criminal politicians has reached? For sustainable solutions, it is imperative that both the demand and supply of criminal politicians be thwarted. As Vaishnav points out, of utmost importance is clearing the morass around election campaign finances and improving transparency and inclusion in political parties. Further, the state capacity in delivering public services should be improved and institutions dealing with rule of law strengthened. Of course, none of these solutions, as the author points out, is a silver bullet by itself.
What is fascinating is the extraordinary deftness with which Vaishnav interweaves different disciplines of political science, sociology, economics and history to create a nuanced narrative. He takes the readers behind the scenes and regales them with a plethora of anecdotes about the foul and fiendish men (while conspicuously leaving out the women) who win in Indian politics. He writes in a prose accessible to lay readers without losing academic depth. It is his thorough analysis and great storytelling that make When Crime Pays an engaging read.
The book is often grimly amusing. In 2008, government whips got six MPs released temporarily from jail for a few days so that they could vote, and avoid a parliamentary defeat – never mind the 100-odd cases of kidnapping, arson, murder and so on that the MPs faced between them! Some of the gangster-statesmen appear to be straight out of Bollywood films.  One local fan of a politician at one point explained to Vaishnav that his MP was not a murderer, “He merely managed murder!”
Modi has pledged to clean up the system – and his recent scrapping of large-denomination bank notes was meant to clean up corruption.  However, he has appointed 13 alleged lawbreaking MPs to his first cabinet – eight of whom face serious criminal charges! One wonders if they supported Modi’s recent demonetisation at all?
Vaishnav is co-editor (with Devesh Kapur and Pratap Bhanu Mehta) of Rethinking Public Institutions in India? (Oxford University Press) to be published soon.
- Advertisement -
Share
WhatsApp
Facebook
Twitter
Linkedin
Previous articleAn oldie but a goodie
Next articleNew-world wines