Confluence – The convergence of cultures 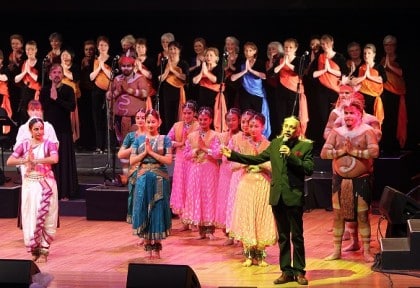 The crossover of Indian and Australian dance, theatre and music was evident at the gala event of the Confluence Festival of India in Australia

In 1870, biologist Thomas Huxley in On the Geographical Distribution of the Chief Modifications of Mankind said, “The only people out of Australia who present the chief characteristics of the Australians in a well-marked form are the so-called hill-tribes who inhabit the interior of the Dekhan in Hindostan.” He commented on the similarities between Aboriginal Australians and the Dravidian people of South India based on linguistic and other material cultural evidence.
A 2013 genetic study concluded that there was a substantial gene flow between Indians and Australians occurring in the Holocene period about 4000 years ago. The findings came as a surprise to many but have since been challenged by other genetic findings.
Whatever the historical truth, the confluence and crossover of Indian and Australian cultures was evident in the beautiful coalescing of dance, theatre and music forms of both countries at the gala event of the Confluence Festival of India in Australia at the Sydney Opera House on Sunday 18 September.
The primordial sounds of the didgeridoo and conch, along with Hindu chants by Durva Gandhi, and the soprano voice of Heather Lee, opened the evening to a packed audience of over 2000 people. Dancers from the Pung Cholam dance group from Manipur gave way to Indigenous Australian dancers from the Nunukul Yuggerra Dance Troupe. The sounds of flute, sarangi and tabla blended with drums and Aboriginal clapsticks.  Soon a cappella voices from the Endeavour Harmony Chorus blended into the Carnatic and jazz vocals of Lisa Young.

While we were taking in the music, in whirled a man in black like a dervish. It was the French dancer, Gilles Chuyen, a disciple of Guru Kelucharan, working in India for the past 22 years with dance forms such as Chhau, Kathak and Bharatnatyam. His fluid movements were followed seamlessly by the entrance of Bharatnatyam dancers from the Madhuram Academy of Performing Arts. Next, Sonam Kalra joined in with her band of musicians from the Sufi Gospel Project who sang their version of Hallelujah with Irish beats.

Ruchi Sanghi Dance Company’s Kathak dancers twirled on stage and soon all dancers slowly returned for the curtain call. They received a thunderous applause, concluding weeks of performances on their Sydney leg of the Confluence Festival of India.
After a short break, the cavernous concert hall, normally a venue for opera singing, became the stage for the roaring rock music performance of the Raghu Dixit Project. His infectious beats, and songs that transcend the barriers of language, most of them in Kannada, had young and old dancing and singing in the aisles and seats of the hallowed hall.

Raghu Dixit himself said it was his “dream venue”. He related the story of how, when he visited the Sydney Opera House as a tourist two years ago, he made a statement to his friend who accompanied him that he would perform here in two years. His dream had literally come true.
In the coming days and weeks this fantastic group of Confluence artistes moves on to Canberra, Perth, Melbourne, Brisbane, Adelaide and Alice Springs to share the India-Oz journey with the rest of Australia.