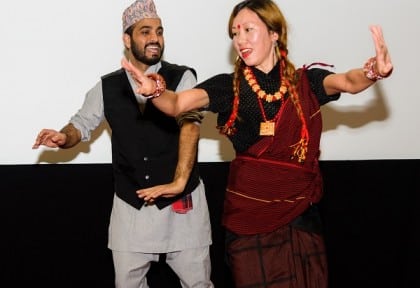 It was a kaleidoscope of cultures as African drummers gave way to Latin dancers, Chinese seniors swirled in unison, and Greek dancers got upbeat while Indian folk dancers went the traditional route. All this, complemented by the quintessential dose of Bollywood and Bhangra, offered a joyous experience to the equally diverse audience that gathered at Clayton Town Hall for the Satrangi festival.
Melbournians had yet another opportunity to celebrate and share its vibrant and diverse cultural tapestry through the Satrangi (7 colours) Film and Arts Festival hosted by Sangam Kala Group Australia.

The festival was held with an objective of showcasing multicultural creative and performing arts. Supported by the Victorian Multicultural Commission (VMC) and the City of Monash, the festival attracted participation from various ethnic community groups in Melbourne.
The Satrangi festival was dedicated to SKGA’s patron, the legendary Indian filmmaker, the late Yash Chopra. It offered a rich program including performances from over 100 local artists, screening of 10 films and ongoing networking opportunities.
VMC Commissioner Chidambaram Srinivasan, Shadow Minister for Multicultural Affairs Inga Peulich, and Hong Lim, Member for Clarinda, were among the many dignitaries present at the opening ceremony of the festival. Guests from media, community activists, artists, cross cultural filmmakers and entertainers were also present to support the festival.

Festival director Nawal Moudgil said the event was organised to showcase potential and engage audiences, whilst promoting diverse arts and cultures. “Cultural expression in such public platforms is of great importance to ethnic communities as a positive means to share their experiences, talent and to promote social harmony,” Moudgil said.
As a dedicated musician and artist, Nawal Moudgil is well known for his talent within the Australian Indian community in Melbourne. Nawal has actively sought to promote Indian music and films through the Sangam Kala Group Australia (SKGA) and New Millennium Films International (NMFI) a film, media and entertainment initiative.

Towards the close of the festival, opinions were sought on the significance of Representation of Cultural Diversity and Identity in Australian Media. The panel discussion explored the need to cultivate an inclusive, diverse mainstream media by encouraging better representation from culturally and linguistically diverse backgrounds.
Over 12 media personalities and community representatives offered their perspective and ideas on addressing the inequality in media in order to influence social cohesion. The Workshop concluded with short screenings of 10 films followed by introduction of the cast and crew. They discussed the subject of their films and also contributed to the cultural diversity debate.
Photos courtesy AP Guruswamy