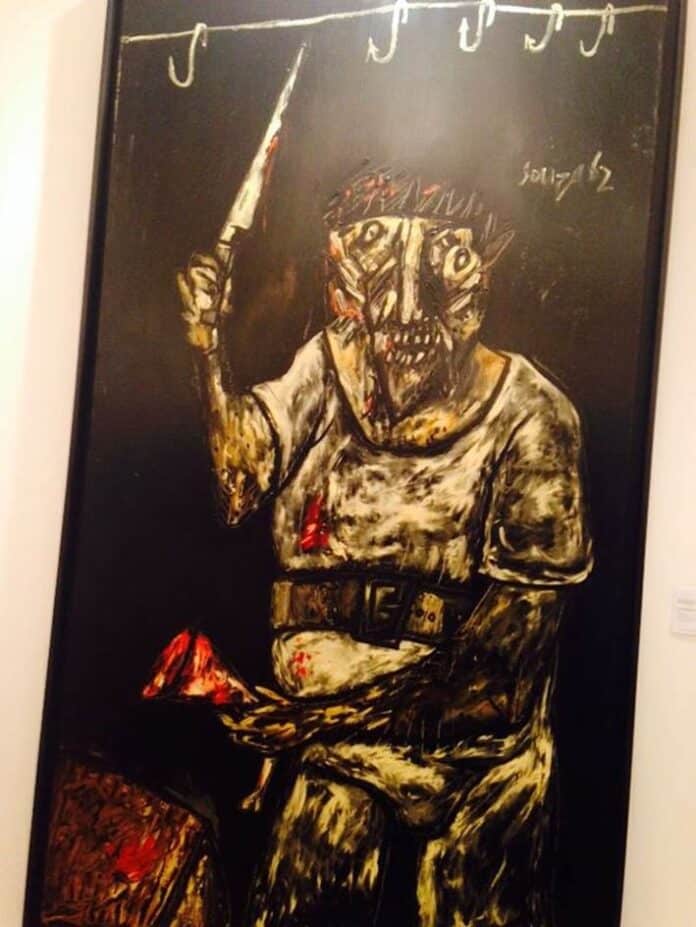 Reading Time: 2 minutesA butcher with a disfigured face against a black background doesn’t qualify for pleasant viewing. But if this artwork is F.N. Souza’s masterpiece, then one would surely look at it again to try to fathom the depth and expressions hidden behind that scary facade.

This 1962 oil-on-satin painting, titled “The Butcher”, is among the 26 selected pieces by prominent Indian artists which will be auctioned at the upcoming Christie’s South Asian Modern and Contemporary sale September 17 in New York.
The painting is expected to fetch an estimated $ 1,500,000 – 2,000,000 ( Rs. 9.3 crore – Rs. 12.4 crore).
The selected pieces have been brought to the Indian capital, New Delhi, and are open for public viewing till Thursday.
Most of these artworks come from the personal collection of Shumita and Arani Bose who run gallery Bose Pacia in New York.
Along with Souza’s painting, artworks by modern masters like Vasudeo S. Gaitonde, one of whose paintings was sold for a whopping Rs. 23.7 crore at Christie’s debut auction in Mumbai last year and Bhupen Khakhar among others are exhibited at the Taj Mahal hotel in Delhi.
In total 96 artworks, including 70 by international artists, are part of this auction. These artworks were carefully handpicked from private collections around the globe.
Souza’s representation of a butcher is believed to be very different from those by other artists who mainly used carcasses to depict butchers, but Souza’s message through it was straight – “what humanity had come to”.
Hence the black background and the distressed human figure reflects that ironic and grim representation of life.
Then there is Khakhar’s festive “Waiting for Darshan” (2000) that is estimated between $400,000 – $600,000 (Rs. 2.64 crore – Rs. 3.72 crore) whereas Gaitonde’s “Untitled” (1971) showcases his mastery as an artist who added much depth and many layers to flat surfaces using monochromatic tones.
The painting is estimated between $750,000 – $900,000 (Rs.4.65 crore – Rs. 5.58 crore).
Apart from these, Nalini Malani’s “Ecstasy of Radha 2” estimated between $60,000- $80,000 (Rs. 37 lakh – Rs. 49 lakh) is also mounted at the exclusive preview.
IANS