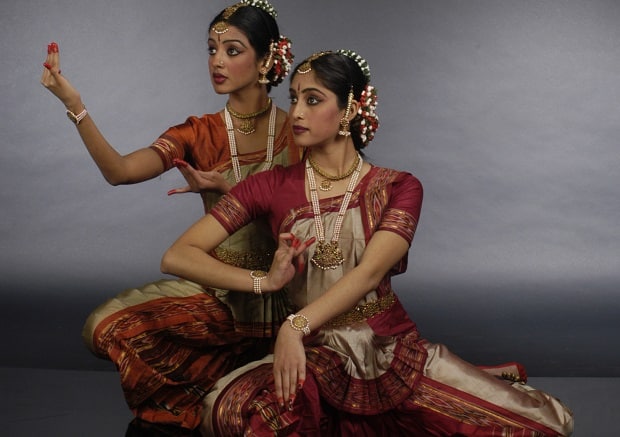 Reading Time: 4 minutesA compelling fusion of Indo-Japanese culture has created an intrinsic dance artform that is traditional, yet contemporary

Come January and a dynamic fusion of music and dance, an innovative cross-cultural partnership, will have its world premiere at the Seymour Centre in Sydney. Japanese taiko drumming and melodious shakuhachi flute sounds will merge with intricate classical Indian dance movements of Bharatanatyam and Kuchipudi to create Chi Udaka. The meeting of the chi (earth in Japanese), symbolised by the deep earthiness of taiko drumming, and the flowing sensuality of dance by udaka (water in Sanskrit) will break new ground in artistic collaboration and fusion.
The companies involved, Lingalayam and Taikoz, and their art forms, are steeped in tradition and history. It is no mean achievement to create this fusion while maintaining these traditions but Anandvalli, Artistic Director of the Lingalayam Dance Academy, and Ian Cleworth, Artistic Director of TaikOz, seemed to have pulled it off with their mastery over their own art, and their willingness to blend and collaborate. This show is part of the Sydney Film Festival of 2014, but the project took its roots over three years ago. TaikOz is responsible for introducing the art of wadaiko (Japanese drumming) to Australia and has appeared on stages worldwide. Lingalayam as a dance academy, was started in 1987 and Lingalayam, the dance company, began in 1997 to provide graduates from the academy an opportunity to become more proficient in their skills and work on such artistic ventures as Chi Udaka.
While Anandvalli is busy in India this month trying to organise last minute costume and accessory fixes, her wards, six senior dancers from the academy, are busy practising in preparation for the shows from January 16-18, 2014. And it isn’t easy for these young women with working lives, children and one even living in Canberra, to fit dance into their busy schedules. Indian Link spoke to two of the performers, Nivedha and Ritika, about the upcoming show. Both, who have been learning classical dance since they were around 7 to 8 years of age, said that dance was such an integral part of their lives now, that it was second nature to them. Every Monday they head for Valli Aunty’s place, as Anandvalli is affectionately known to all her students, to dance and rehearse.
The show means more practice sessions, with frequency increasing to daily soon. The planning and choreography for the show began way back in 2011. Ritika says, “We had two workshops of two weeks each with Taikoz in two years. Ian and Valli aunty came up with a framework and a structure, but not much was choreographed until we met. The workshops gave us an opportunity to collaborate. We choreographed along with them. As we heard the music and saw how they played and they saw how we danced, the choreography fell into place. The second workshop gave us an opportunity to add another finale piece. This show is indeed a culmination of these collaborative workshops.” The first stage of creative development in 2011 was funded by the Australia Council for the Arts and the workshop at stage two in 2012 was funded by Arts NSW, which gave them an opportunity to complete the work. Since then they have been honing and practising on the work.
The first time they heard Taikoz drummers, they were terrified! “The drums are loud, very loud. We had heard snippets on CD, but we don’t get the impact until we are right there. We tried dancing to the sounds of the drums before the first workshop and we thought we were choreographing to a reasonable speed. That was until the drummers started playing live, and we found the speed to be ten times faster! It was almost like we were dancing in fast forward!” Ritika reminisces. “We can feel the music pounding in our chest when dancing. It amps one up and excites one when we dance with them,” adds Nivedha.
In the show of an hour, there are dynamic fast-paced earthy dances accompanied to the sounds of taiko drums and soft dances that depict the flowing sensuousness of water, accompanied the sounds of the Riley Lee’s shakuhachi, John Napier’s cello, and an overlay of classical Indian overtones and vocals by Aruna Parthiban. Separate pieces blend together seamlessly. The six musicians are not stationery. They move around and dance too.
Anandvalli in an open letter to her patrons on her website says, “For me personally it has been a very gratifying journey collaborating with Ian Cleworth, and in turn TaikOz.” She has high praise for Ian’s musical skills and brilliant composition, with a rare ability for creating a score perfectly suited to the artistic work at hand. “The mostly original musical score written by Ian and Riley for ‘Chi Udaka’ has inspired a choreographic vocabulary like you have never seen Lingalayam deliver!” she states.
From the clipping of the show I have seen online and from what I heard described by the dancers, it seems like it would be hard to say if this synthesis is music in dance, or dance in music. The movements and sounds all integrate and change forms constantly, and together create an experience that will be worth listening to, viewing and into which you could submerge. As the Taikoz drummers say, “To beat with every muscle, bone and sinew in our body with an open and joyous spirit”, which is their motto, so too the dancers from Lingalayam aim to match their exuberance with their own footwork and beautiful body movements.