Chai and spice and all things nice 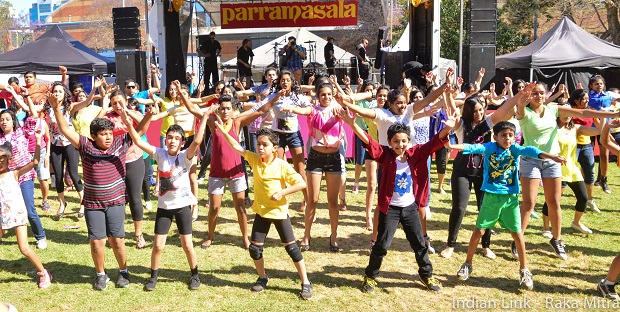 Cultural festivals like Parramasala are an impetus for communities to forge collaboration, writes  ROYSTON REBELLO

They express solidarity, demonstrate a well-knit social fabric, and offer us an opportunity to reinvent ourselves as we come face-to-face with cultures other than our own.

In the spirit of celebrating the multicultural camaraderie of Western Sydney, the city of Parramatta played host to ‘Parramasala 2014’ – the festival for international contemporary arts – on the weekend of 17-19 October. This year saw the fifth annual instalment of the festival, organised under the aegis of the NSW Government and supported by others.

The festival kicked off with the spectacular Parramasala Parade combing Church Street all the way through Centenary Square and ending up at Prince Alfred Park. Carnival-esque in appeal, it was reminiscent of a Mardi Gras. The ladies looked gorgeous, decked out in mythological and contemporary-styled attire. The menfolk dressed up in cheeky costumes ranging from the colourful to the bizarre! People lined the streets to wave the floats on with a cheer, or a shriek, like the toddler who clung to his mum as the dragon float came by! And for those who were not street-side, ABC Radio 702’s Evenings show with Dom Knight broadcasted live from the event from 7pm to 10pm.

The opening ceremony at Prince Alfred Park culminated in a brilliant dazzle of fireworks that bathed the twilight skies. As the program ensued, tasty treats from around the world, both culinary and cultural, followed.

Karifi and the African Union Dancers enthralled the audience with their drumming and dancing; and the NSW Police Band marched the streets with their stomping tunes. More entertainment followed with The Parade drum and dance circle jam with everybody pitching in. L- FRESH the LION and his Punjabi hip-hop band pumped up the crowd.

Other notable dances included the Swastik Dance School and the exhilarating ‘Moving Celebrations’ performed by the Thrayee Dance School. Nathaswaram and Thavil music, Victor Valdes and the Real Mexico Mariachi Band were superb as well.

Elsewhere at the festival, kids enjoyed camel rides, and others danced away, ostensibly to nothing, at the Silent Disco with music on their earphones.

Coinciding with the gig, we had the South Asian film festival, visual arts exhibitions, back-to-back classical dance shows, fusion music performances, poetry, qawaali and a Hindustani play, at venues around the area. (Check out Indian Link’s reports of these in this issue).

For those with a penchant for food, it was ‘Bon appetite’ time. The spicy aromas from the Masala Markets presented an enticing range of authentic culinary delights. The Chai Temple sported an oriental ambience and folks swarmed in to chill out with flavoured and masala teas.

The ‘Eat Street’ as it is well known in these parts was revisited with swarms of food enthusiasts who combed the length and breadth of Harris Park for Indian delicacies. Special cuisines from the South Asian communities were also seen on the menu that left many folks craving for more.

The exotic bazaar felt like a page out of the history books. The place bustled with activities of the orient and it felt like being transported… perhaps back to Pataliputra or Asia Minor!

The crowds got carried away with excitement as speakers cranked up the music at the Bollywood Block Party that thundered all the way down to Harris Park. Local singer Priyanka Pri Pri swayed the crowds as she performed on the stage in the roundabout of Wigram and Marion Streets.

This year the festival was inclined towards exhibiting home-grown talent and acts. Some 30 nationalities and cultures participated in the celebrations which attracted crowds in great multitudes. A steady dose of the party atmosphere ensured that party goers and food connoisseurs lingered on and basked in the festivities.

Parramasala 2014 turned out to be a wonderful opportunity to experience the many diverse cultures of Sydney and to explore facets of life in Western Sydney.