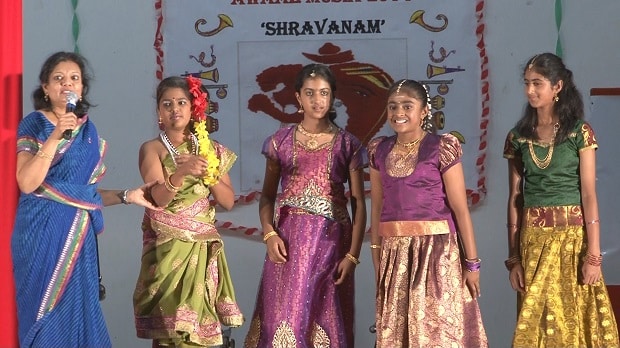 Reading Time: 3 minutesSANTOSH JANSSEN-GIBSON reports on a soulful night of Carnatic music and dance highlighting the dedication and expertise of MSM students

The Mandir School of Music presented another rich aural and visual musical evening on March 22 in Canberra with Shravanam – a listening experience. The literal meaning of shravanam is ‘hearing’. But in the language of the Vedas, this word means ‘experiencing God through shravnedriyam or the instrument of hearing’. Each year the school’s programs take the audience on a spiritual journey, and this time the focus was the Navavidha Bhakti – the 9 forms of Bhakti. The school’s founder and principal teacher, Ragini Santhanam, explained that shravanam is the first principle of practicing bhaktiyoga and is seen as perhaps the most simple method to experience God – if we want to see God, begin by simply hearing.

The event was full of entertainment, including a combination of classical, folk and devotional music and dance, with all singers accompanied by live percussion support. The school’s youngest students opened the evening by defining the 9 forms of bhakti in a simple and beautiful way, followed by shloka recitations and bhajans. They demonstrated maturity beyond their years through their composure, diction, rhythm and memory retention, a credit to Ragini’s traditional and skilful teaching practices. One parent commented that “their demonstration of oneness in uttering the name of God purified the whole atmosphere. The vibrations emanating from them made our hearts vibrant”.

The heartfelt performances continued with junior students confidently executing popular kirtans, bhajans and Bharathnatyam. The students were dressed majestically and showed great dignity and presence whilst performing on stage. Said Aparna Ravinithala, a parent, “I could feel that the children all sang from their hearts and not from their lips. By teaching music, shlokas and bhajans along with discipline, the school has created a pathway to spiritual knowledge in our children, educating them for the wellbeing of the world”.

At intermission, the audience reflected on the accomplishments of the students whilst being treated to delicious traditional Indian food prepared by the Ceylon Cafe from Woden.

The second half of the evening showcased the accomplishments of senior students of the school. A highlight was young ladies who sang Adi Shankara’s Shiva Panchstagam as a ragamalika in five different ragaas. It was apparent that these girls had developed an understanding of the subtlety of raga, and a skilful proficiency in the use of their vocal instruments. The evening concluded with a performance by the school’s most experienced and accomplished adult students, accompanied by Ragini herself. They expressed their spirit artfully through ragas such as Bhairavi, Arabhi and Ranjani.

Interspersed throughout the singing acts were a variety of dances including Pushpanjali, Alaripu, Jatheeswaram, a folk dance, and Bollywood, all coordinated by Suja Loganathan who runs the Impressive Dancers School. The evening ended with all the school students beautifully united in their school song, demonstrating the camaraderie characteristic of the school, fostered by its principal Ragini. Students were shown appreciation and encouragement through certificates of participation.

As part of the celebrations, the school’s own website was launched, ably assisted on the technological front by a parent Aruna Kumar. The site will contain pictures from the concert, and will include updates on the classes and programs. Undoubtedly the website will increase the credibility of the school, and redefine their motto of passion devotion and dedication.

Overall it was a fulfilling evening and the audience was left wanting more. “Each group of students is a treasure and each gave a very impressive and confident performance,” commented Ragini. “I was proud and extremely happy. When I look back over the years, and the many programs we have staged together, I can only say – what a ‘journey’ this has been!”

It was evident from the quality of the performances that the students had worked with passion, devotion and dedication to prepare for the concert. Most importantly it was clear that Ragini had guided the students to begin their own journey towards shravanam. The audience too, was taken on this journey and were uplifted through listening to the music. As Sathya Sai Baba said, “In this busy age of fear and anxiety, the remembrance of God and repetition of His name is the one means of liberation that is accessible to all”. The school’s shravanam program proved this once again.