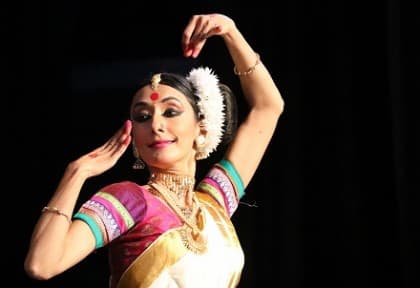 World Dance Day on 29 April was marked by a Dance Mela held at Renaissance Theatre, Kew. The event was organised by Art of Vinyasa Bharatanatyam and Yoga Centre Melbourne.
This festival is conducted annually with an aim to celebrate the diversity of the multicultural Melbourne through the medium of dance. The evening’s programme included dance from local schools, and national and international artistes of repute who also educated and enthralled the audience.

The evening began with a Bharatanatyam performance by Premita Ramesh, a young student of engineering from India, who showed up to celebrate her passion for dance, despite being in the midst of her final exams. Her performance was very promising and she displayed all the characters of a confident young budding artist.
The Irish Dance by Christine Ayres School of Dancing led by Conor Ayres was one of the most anticipated dances of the evening, which did not fail to impress. The reputable school of Melbourne showcased the hard and soft shoe tap dancing and a couple of contemporary choreographies.

Bindu Rajendren from Brisbane showcased yet another Classical Dance style from India, Mohiniattam. Her Guru, Smt Tara Rajkumar OAM, gave a brief introduction to this style of dancing. Bindu’s presentation was filled with graceful movements and lucid abhinaya, highlighting the nuances of her artform.
This was followed by ballet, performed by close to 30 kids from the Kew School of Dance. The group consisted of kids as young as 6, all joining in the celebration of dance under the able leadership of their teacher Alice Hobden, who provided an insight into the history of ballet.

The piece de resistance and grand finale for the evening was the special Bharatanatyam performance by Dr Vasundhara Doraswamy, a danseuse par excellence and a venerated Guru from India. Her performance kept the audience spell bound as it emphasized on the aspect of “Satvikabhinaya” that demarcates any classical Indian dance from other dance forms around the Globe.
Dance Mela was truly a festival that brought various dance schools and communities together to celebrate the joy an art form like dance can bring into lives.