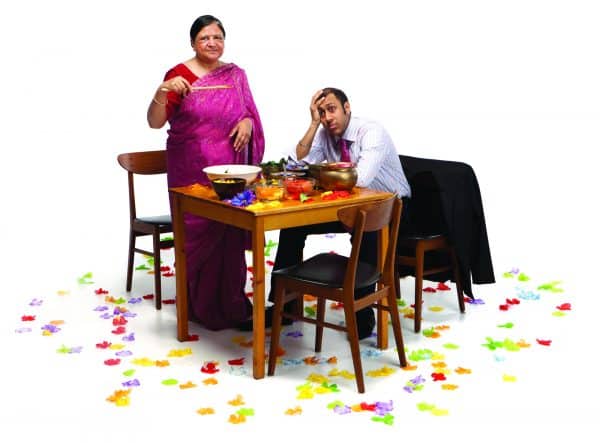 Prior to his upcoming Australia-trip, Canadian theatre artist Ravi Jain spoke to Indian Link about his upcoming show at the Melbourne Arts Festival, his co-artist mother, her take on arranged marriage and some theatre making.

In the age of Tinder and eHarmony an Indian mother cooks up an elaborate plan of arranged marriage for her son. In an earnest bid to secure his eternal happiness she literally has a roster of marriageable girls laid out for him, but he cannot eschew the idea of picking a partner without love.

The production Brimful Of Asha in this year’s Melbourne Arts Festival, is a hilarious true story by Canadian theatre maker Ravi Jain and his real life mother Asha Jain’s take on arranged marriage.

Having sparked audience interest in Canada, US and London, the show is heading to Melbourne’s Malthouse theatre this October.

The play fosters spirited dialogue between the duo as they present their individual perspectives to the audience though a very relatable story straddling two different generations and cultures.

Managing multifaceted roles of writer-director, actor and producer, Ravi Jain is also the founder and artistic director of Why Not Theatre. He has directed critically acclaimed productions Salt Water-Moon and Bernard Shaw’s The Adventures of the Black Girl in Search for God. In 2016 he was awarded the Dora Mavor Moore award for directing. His work is inventive, cross-cultural, and reflects his passion for the exploration of difference.

Giving a taste of what to expect from Brimful Of Asha Ravi revealed that it’s a true story of how his parents tried plan an arranged marriage in 2007 and it didn’t go so well.

“It’s a very funny story ironically and it’s told by me and my real life mother who is not an actor,” said Ravi. “We argue and tell the story from our different perspectives as to what happened and the challenges that come up when you are rooted in one culture but living in another. It’s about how we honour those traditions but accept different points of view and different ways of living.”

There’s also a book co-authored by them that provides an edited version of the play with family photos and recipes from Asha.

“A big part of my relationship with my mom is around the kitchen,” shared Ravi. “That’s the heart of our home, it’s where we come together, over food, where we chat. I really wanted to take the theatre away so my mom could be the boss of the show, and so the play is set in a kitchen.”

“When the audience arrives they are greeted and offered samosas and we ask them to sit for a chat. This is how we would meet them if they were to come to our house. This has now extended to cooking classes and mom also shares her recipes with the audience after the show. Food plays a huge role in experiencing our culture and it is a great way to meet and know people and have some fun,” explained Ravi.

“In Brimful of Asha theatre allows my mother, a 65-year-old immigrant Canadian Indian woman, to present her ideas on arranged marriage and explain why it’s important to her. She gets to centre the conversation around her voice. This is like a political act because it helps the Western world to understand a different perspective and be empathetic towards diverse cultures and their beliefs,” he clarified further. “Theatre gets people together to imagine a world that is possible, and as an artist I’m always trying to challenge the status quo,” declared Ravi. “We live together in a society that will inevitably have clashes of perspectives and cultures so it’s my responsibility as an artist to encourage the audience to be more empathetic and think about creating an inclusive world.”

As multicultural art tries to find its feet in Australia, Ravi gives us a peek into the status of cross cultural collaboration in Canada.

“I think historically Canada has also been very Caucasian but we have a foundation of pioneers from different cultures in the arts. The black Canadian experience, the Asian Canadian experiences the Filipino and the Chinese have all been making their mark in the Independent scene” observed Ravi.

He added, “It’s really in the last 3 or 4 years that there’s been a real big shift in leadership, for example 2 years ago all of the major theatre venues in Toronto were run by straight white men. In the last two years though, only two theatre venues are run by white men and all the rest are now primarily owned by women of colour.”

“We are a company that’s all about supporting different voices and challenging who gets to tell the story and what stories are being told. People have been fighting for a long time to have their voices heard but only now those voices have started getting the kind of support that they deserve,” remarked Ravi.

Currently, Ravi is working on a major project based on a modern adaptation of the Mahabharata.