Rupi Kaur: Breaking barriers, one poem at a time

‘My heart aches for sisters…’ so Rupi Kaur writes for their pain. 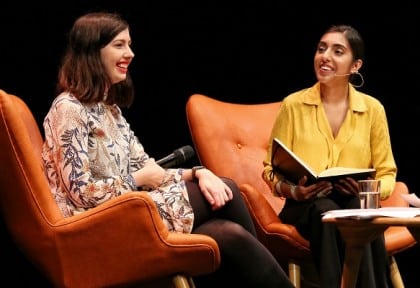 In a sold-out session, new age poet Rupi Kaur sat down in front of an audience of over 200 as part of the Sydney Writers Festival, to talk about her work and her journey. Kaur is a Canadian-Indian poet, spoken-word artist and visual artist, whose collection of poetry Milk and Honey has sold over 1.4 million copies worldwide.

Half expecting to see a room full of young Indian women, it was refreshing and inspiring to see the auditorium brimming with young women – and men – of all cultures, clutching their copies of Milk and Honey. It is a testament to her role in inspiring the younger generation to fall back in love with poetry.

Kaur was articulate and spoke confidently, warmly and openly answering questions posed by host Sara Mansour, and reading to the audience from her bestselling book. Towards the end of the “In-Conversation” session, Kaur laughingly told her fans that “this is the most I’ve shared in an interview!”

An acclaimed poet, 24-year-old Kaur initially appealed to Generation Y as an ‘Insta-poet.’ She took to social media platform Instagram to post her photography and her poetry about issues that she felt passionately about – a step that has now amassed to a 1.3 million strong following.

Writing about women’s experience, Kaur taps into what may be considered ‘taboo’ subjects such as menstruation, abuse, and sex, as well as love, loss and survival.

our backs
tell stories
no books have
the spine to
carry

She went on, “Writing is deeply cathartic. Studies have shown it has the ability to heal physical wounds, so imagine how powerful it is for mental or emotional trauma.”

Kaur said that growing up, she was a “fly on the wall,” and posting to social media was a “way of expressing [herself] almost silently.”

She claims she accidentally fell in to writing, after reading the works of poets like Khalil Gibran.

“I felt seen for the first time, and this was through other people’s words,” she said. It is apparent that the same sensitivity in her own poetry has enabled it to resonate with so many people.

Having been told that there was no space for her and her writing in the Canadian literary sphere, Kaur decided to self-publish in 2014.

“I never paid any mind to those who said I did not fit the mould. I didn’t do it in the traditional way… I didn’t smash the gate, I just created a whole different gate,” she told her smitten fans.

Milk and Honey was later rereleased by Andrews McMeel Publishing, and it became a New York Times bestseller.

Kaur moved to Canada with her family at age 5. Unable to speak English at the time, she began to paint. An ode to her humble beginnings, all the illustrations in Milk and Honey are Kaur’s own.

Kaur is currently editing her second book and touring the world, speaking about her journey and meeting fans. She credits her success to her dedication to the art, and the unaffectedness in her work.

“I wasn’t born a great poet,” she said. “It took discipline and hard work.”