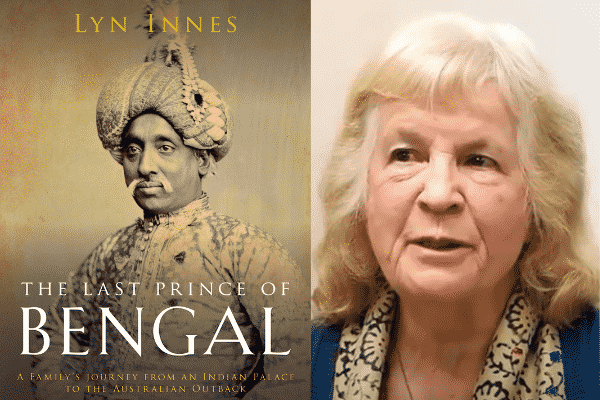 The Last Prince of Bengal is the intriguing true story of one of India’s most powerful royal families. It’s a fascinating tale about Nawab Nazim and his family’s journey from India to Britain, then Britain to the harsh Australian outback – and told by none other than the Nawab’s Australian descendant.

Set against the backdrop of British occupied India, the book provides commentary on the overt racism, classism and sexism that was part of the culture during the turn of the century. In the first part, author Lyn Innes details candidly the manipulative actions and attitudes of the British Empire towards Nawab after he loses his father at a young age. His kingdom, which ranged from the soaring Himalayas to the Bay of Bengal, was three times the size of Great Britain and was seen as a threat by the British authorities. The story is a tragic one in which a young Nawab is deceived by the very same authority that made unfulfilled promises to his ancestors, all while making an enormous profit from trade within the kingdom. As a result, he would spend a large portion of his life fighting for his rights, title, and security for his growing family.

Innes brings to life the glamorous life of Nawab and details the journey he makes from India to London to continue his fight for survival. Innes paints a vivid picture of London at the turn of the century through old articles and quirky anecdotes, highlighting the way in which the Nawab was perceived by the British press and government.

The second part of the book is a more personal story of Innes’s grandfather, who was one of the sons born to Nawab Nazim during his time in London, where he married an English chambermaid, unbeknownst to the rest of his family back in India. The plight of Innes’s grandfather, Prince Nusrat Ali Mirza, could not have been more different to his father. Growing up mostly in England, Prince Nusrat Ali Mirza saw his title as more of a hindrance to living a normal life. While his father was proud of his heritage and fought to preserve it, Prince Nusrat “felt uncomfortable with the title of Indian Prince” and avoided drawing attention to his status and title throughout his life. Through his story, we get an intimate glimpse into the trials and tribulations of a generation that lived through the first World War and the economic depression that followed it.

While much has been written about life under the British Empire, there are lesser-known accounts of life in Australia during the early 1900s. The story of Prince Nusrat Ali Mirza ends in Australia, where he migrates with his family at the age of 50. During this time, Australia had what is now known as the “White Australia Policy”, which prohibited any non-European from migrating to the country. This blatant racism was widely accepted at the time and resulted in Prince Nusrat Ali Mirza concealing his Indian heritage and status for the rest of his life, as well as changing his name to make it sound European. It is a far cry from the glamour and respect commanded by his father. While Australia has come a long way from the 1900s, it is not uncommon even now to see immigrants change their names to fit in, or to be subject to casual racism. This connection between past and present is noted often in The Last Prince of Bengal, making it clear that we still have a long way to go.

Innes, who is a professor of postcolonial literatures at the University of Kent, has gone to great lengths to provide accurate historical details alongside the personal stories of her family, equipping the reader with enough context to really understand the world the characters were living in. It is an eye-opening saga not only for its compelling plot but also for the truths it uncovers about the British Empire and the injustices faced by millions as a result of their regime.