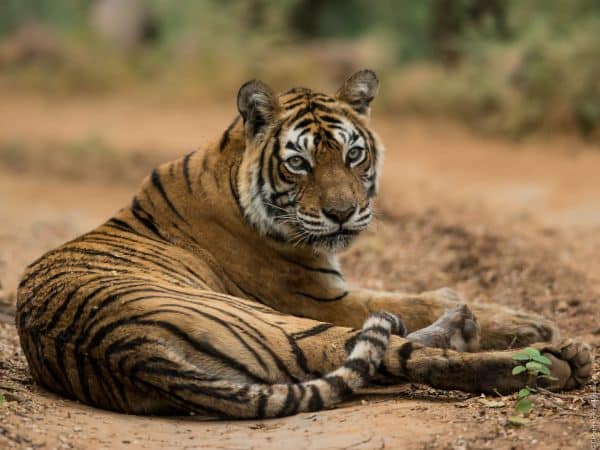 Reading Time: 4 minutesAt a time of increasing man-animal conflict comes a heart-warming tale of two families – one human, one tiger – following parallel journeys in which the powerful drives to connect, love and raise the next generation play out. All this inspired by Machali, arguably the most famous big cat in the Ranthambore reserve in India’s northern state of Rajasthan.

“Three Ways to Disappear is a convergence of my love of writing, my love of animals and nature,” said author Katy Yocom about her debut novel, in an email interview from Louisville, Kentucky.
“I had always loved big cats, and I began visiting them frequently (in the town zoo), enjoying their antics and watching them grow. I was fascinated by them. I began to dream up a story involving tigers, and although I tried to write the story, I realized I didn’t know enough about wild tigers to write convincingly about their lives and their landscape,” Yocom, an associate director of Spalding University’s School of Creative and Professional Writing, explained.
She knew she needed to travel to a tiger reserve and initially thought of Sumatra, because the tigers at the zoo were Sumatran, but after doing a bit of research, “quickly realised” India was the only place to go.
“I booked a trip, and Ranthambore was the first national park I visited. (I also went to Kanha and the Sundarbans.) Machali was the first tiger I saw on that trip, and she was extraordinary. She must have been about six or seven years old then, in her absolute prime. I saw her quite a few times – I was lucky enough to arrive during cold weather, and the animals were all very active.
“I saw her walking down a road before dawn one morning. I saw her bathing in a grove of trees, and resting in the golden sunlight at the edge of Raj Bagh Lake, and in several other situations. Every sighting was electrifying. I didn’t really understand that she was famous, or at least not as famous as she became. This was in January 2006,” Yocom said.

At Ranthambore, Yocom, who was accompanied by her mother, was “lucky enough” to have naturalist Vipul Jain as her guide.
“He not only showed us the park and its wildlife but also took us to several villages in the district so we could see what it was like for villagers who live in the territory of the tiger. Because he knew I was writing a book, he also took us to a hospital, arranged for me to interview the artist M.D. Parashar and a local wildlife veterinarian, and more. Thanks to these experiences I was able to write a more complex and nuanced story than I could possibly have done otherwise,” Yocom explained.
Quite naturally, she can’t stop gushing about Machali.
“Ah, Machali! The most beautiful, perfect tiger I have ever seen. One day during our visit to Ranthambore, as I took her photo, she looked right into my camera lens. A large print of that photo hangs on my wall now, so every day I see her looking right at me. Her gaze creates a sense of connection. Even if this is just an illusion, that photo makes me feel as if we shared a moment of rapport. It makes sense to me that she became a worldwide celebrity. She was so regal,” Yocom said.

What then is the book all about?
Leaving behind a nomadic and dangerous career as a journalist, Sarah DeVaughan returns to India, the country of her childhood and a place of unspeakable family tragedy, to help preserve the endangered Bengal tigers – a task made complicated by complex local politics and a forbidden love.
Meanwhile, at home in Kentucky, her sister Quinn, copes with their mother’s refusal to talk about the past, her son’s life-threatening illness and her own increasingly troubled marriage. When Sarah asks Quinn to join her in India, Quinn realizes that the only way to overcome the past is to return to it, and it is in this place of stunning natural beauty and hidden danger that the sisters can finally understand the ways in which their family has disappeared – from their shared history, from one another – and recognise that they may need to risk everything to find themselves again.
Three Ways to Disappear is all about saving all that is precious – from endangered species to the indelible bonds among family.

“I knew that in the wild, tigers face long odds, and the complexity of the human-tiger relationship captured my imagination. I’ve always been drawn to stories confronting the big questions: life, death, how we carry on in the face of loss, what it means to be truly connected to someone, and what it takes to heal broken relationships.”
How did she zero in on the title?
“The title is a bit of a mystery even to me! I originally chose “Three” because the family in the story has three children, and “disappear” because of the threat of extinction to the tiger. But there are so many ways to disappear: for instance, through death, or by withdrawing from relationships. And as time goes by, the meaning of the title shifts a bit. Currently I think one interpretation of three ways to disappear would be physically, emotionally, and spiritually,” Yocom explained.
IANS