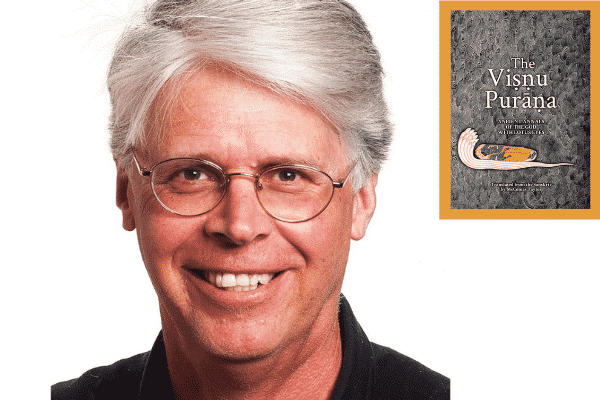 McComas Taylor first felt drawn to Sanskrit when he saw Peter Brook’s television production The Mahabharata in the late 1980s.

Today, as an academic at the Australian National University, he has translated the entire Vishnu Purana from its original Sanskrit, into English.

Released in June this year, the book The Viṣṇu Purāṇa (ANU Press) is the first English translation of the ancient Sanskrit text in over 200 years.

The Vishnu Purana is an ancient Indian text believed to be some 1500 years old. As an introduction of sorts to Hinduism, its six chapters explain Hindu thought starting from the creation of the universe to the description of the religion in Kaliyug or the ‘modern’ era.

“It’s a collection of beautiful verses which is typically sung or recited,” Dr Taylor described to Indian Link. “I’ve tried to capture the musicality of it all, and I hope that it will be read aloud, as it should be, or recited – not read silently.”

He added, “The original is in metric, whereas mine is in blank verse, although I stuck to the rhythmic nature of the verses. You might have heard that old saying, poetry is what gets lost in translation! I’m also considering an audiobook.”

The project was five years in the making, Dr Taylor revealed. “Four of these were spent in translation, working 9 to 5, as each idea was translated into English – I produced five complete versions. The last year was spent polishing it all.”

The performance aspect of puranic texts has fascinated Dr Taylor for some time now.

“I spent a great deal of time studying the Bhagavata purana, especially observing the saptaha (seven day) tradition of its recital. These are beautiful events, describing stories of Krishna.”

A colleague in India then suggested he should translate the Vishnu Purana. He took the project on, commencing on 13 Dec 2016, a full moon day sacred to Vishnu.

Which sections of the book would he pick as his favourite?

“The advent of Krishna, the gopis in Vrindavan in particular. It’s just sublime. My favourite verses are where the gopis follow the footprints in the sand, and know that Krishna is walking with one other girl. At one stage they can only see his toes, and surmise that he was reaching up on his tiptoes to pick a flower for his beloved.”

READ ALSO: The future of Hindi is safe at La Trobe

A lifelong love of Sanskrit

McComas Taylor fell in love with the Mahabharata following Peter Brook. He was already involved in Asian studies by then, having dabbled in Chinese studies and Tibetan studies.

“The TV show was life-changing for me, setting me on a lifelong study of Sanskrit and the traditions of India and Hinduism. I’ve been reading the Mahabharata in the original, a page a day, since. I began about eight years ago, and I figure I have four more to go, so it’s on ongoing project!”

Today his research lies at the intersection of contemporary critical theory and classical Sanskrit narrative literature. Starting with explorations of the Panchatantra tales (which led to an early book The Fall of the Indigo Jackal, 2007), he moved on to studying the performative and ritual aspects of Sanskrit texts. His work is recognised for its contributions to the manner in which texts shape societies, particularly in the interplay of power, text and oral performance.

As a Sanskrit scholar and researcher, Dr Taylor has also seen his university become the leading national and international provider of Sanskrit studies. ANU offers the leading Sanskrit program in the world, having pioneered an online program.

“We’ve been teaching on Zoom long before the pandemic made it popular,” Dr Taylor laughed. “The program, for first year tertiary students, has been going for 15 years now. It attracts students from Europe, North America, China and India. In fact, we can claim to be the only university in the world that exports Sanskrit studies to India.”

The e-book he helped develop, The Joy of Sanskrit, has been downloaded some 180,000 times.

The program incorporates a spoken element, quite rare in Sanskrit studies. “Students at the end of the first year can speak about themselves, their families, likes and dislikes, and have a vocabulary of about 250 words.  Uniquely, we balance production of language with reception of language – classical and textual Sanskrit as well as its spoken, written and recited forms.”

About a third of the students are of Indian cultural heritage, Dr Taylor described, the rest being yoga practitioners keen to access the fundamental texts of their traditions. “They want to get a deeper knowledge of the asanas they practice, or the verses they chant every day.”

What better way to end than to have McComas Taylor present a message to our readers, in Sanskrit.

We are all currently experiencing much sadness in the world. However in the coming year, my hope is that we all get to experience peace.