VIKAS DATTA on 'Doorstoppers', or Very Long Reads: Books so large they take up 1000 pages and more 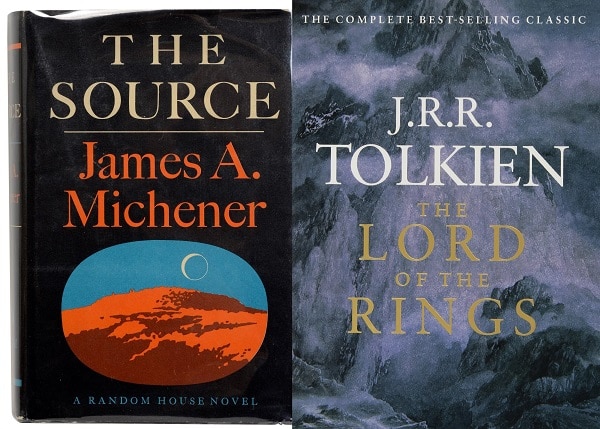 Many online articles (this one included) tell you upfront the time it will take to read them.

This feature is a telling indictment of our time-stressed, hyper-regimented contemporary life.

Suppose this trend gets transplanted to books?

Will it work on what’s known in the literary realm as “doorstoppers”, or tomes so large they take up nearly 1000 pages? For such bulky books, the reading time will need to be measured in weeks or months; and for the casual, not very committed, reader, it could stretch to a year.

While many comprehensive and leading dictionaries, encyclopedias and textbooks from various realms of sciences to law to computer languages, are doorstoppers, the category is not uncommon in fiction. These must be differentiated from omnibus editions in which two or three “medium-sized” works of an author, or perhaps more than one author, are printed together.

Doorstoppers, or big, fat reads in fiction usually comprise what we call literary classics, say George Eliot’s Middlemarch (nearly 900 pages), Leo Tolstoy’s War and Peace (more than 1,000 pages in most editions), or Miguel de Cervantes’ Don Quixote (nearly or over 1,000 pages, depending on the edition).

They can also be about titanic conflicts between good and evil – everything from Alexander Dumas’ grand revenge saga The Count of Monte Cristo (1,000 pages plus in most editions) to the Harry Potter series (particularly the last four instalments, with The Order of the Phoenix being 700-800 pages, depending on the edition).

They could be grand sweeps of history, spanning several generations, such as by authors James Michener and James Clavell, or romances (Margaret Mitchell’s Gone With The Wind, 900-1,000 pages).

Or again, they could be a mixture of all the above categories, such as M.M. Kaye’s The Far Pavilions (over 950 pages).

And of course you can count on them to have tons of characters. The Count of Monte Cristo begins with half a dozen and goes on to have three dozen prominent ones by the time it gets into high gear. 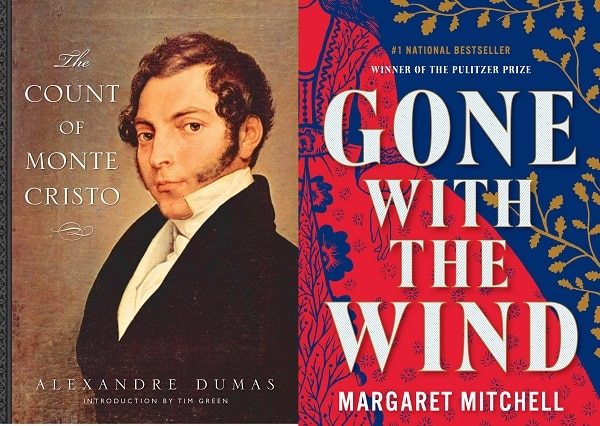 Some have a list of characters, usually at the beginning – which is helpful in keeping track.

The advent of technology has made actual doorstoppers rather rare, as e-readers and tablets can accommodate a whole host of bulky books, saving avid readers the chore of lugging them around. Some aficionados though, still prefer the lugging around. Owning these tomes is also a mark of pride for fervent book owners, for the gravitas they confer upon their bookshelves.

Let’s look at some doorstoppers across various genres.

As mentioned, literary classics, by the likes of Tolstoy,  whose family name derives from the Russian word “tolstii” (meaning thick or stout), or by his compatriot Fyodor Dostoyevsky, or others such as Charles Dickens, Victor Hugo or Dumas turn out to be doorstoppers, since they were paid by the page, and seem to have made the most of it. Most of their famous works began as serial instalments, so they did not consciously – it can be assumed – set out to write heavy tomes. 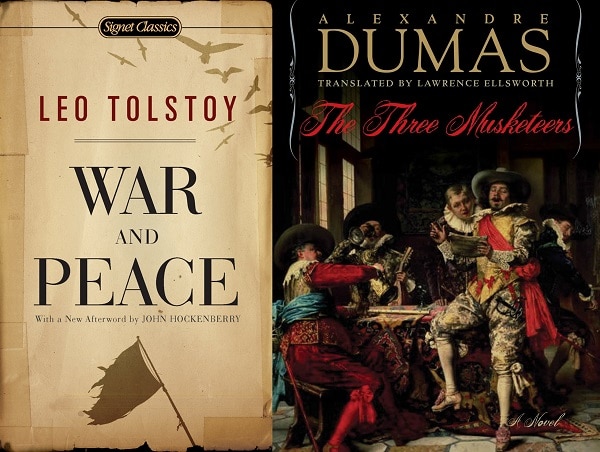 Dumas was a master. His The Three Musketeers is the first of the three novels that comprise the D’Artagnan Romances, and was followed by Twenty Years After – both are at least 700 pages-plus in most editions. The final instalment, The Vicomte de Bragelonne, is usually divided into three or more books, the last being The Man in the Iron Mask, and each one of them is over 700-800 pages long.

Dickens was not far behind: of his 14 completed novels, eight, including The Pickwick Papers, Nicholas Nickleby, David Copperfield, and Our Mutual Friend are well over 800 pages in most editions, and some span 1,000 pages plus with annotations and footnotes.

But the tradition continues beyond the 19th century.

J.R.R. Tolkien’s epic high fantasy adventure The Lord of the Rings, well-known due to the films, is a prime example.

Though Tolkien wanted it published as one, it was eventually published as three volumes of two books each – The Fellowship of the Ring, The Two Towers and The Return of the King – between July 1954 and October 1955, due to various reasons, such as paper shortage, high production costs, and the publishers’ uncertainty about its reception.

Happily, the publishers subsequently published it together; a special hardcover and illustrated edition that came out in 2021 consisted of 1,248 pages each and a paperback, 1,216 pages.

Even before him, there was Kathleen Winsor’s bestselling historical romance Forever Amber (1944), set in mid-17th century England when the monarchy was restored under Charles II. It tells of orphaned Amber St. Clare, who makes her way up in society by sleeping with and/or marrying successively richer and more important men, while nursing her unattainable love. It was promptly censured by the Catholic Church, making it a bestseller.

What keeps the book, which is 992 pages in its Penguin paperback edition, from being a forerunner of Jackie Collins or, say, Shobha De, is the meticulous historical research covering Restoration fashion, and titbits such as how the tea habit took over England, as well as contemporary politics and public disaster, including the plague and the Great Fire of London.

Austrian writer Robert Musil’s modernist work The Man Without Qualities (first published in 1930 in German; 1953 in English) is a quasi-allegorical, existential – and satirical – look at the Austro-Hungarian Hapsburg empire in its twilight era, just before World War I.

The principal protagonist is a rather vague, ambivalent and indifferent mathematician named Ulrich, the “man without qualities”, who depends on the world to mould him. The work also shows how a celebration of international peace and imperial unity leads to national chauvinism, war, and collapse.

It was unfinished, but the English version is over 1,150 pages, while the original German one, over 2,100.

After “normal-size” works such as the inter-racial love story Sayonara (1954) and depiction of a radically different Afghanistan in Caravans (1963), Michener began producing doorstoppers with his multi-generational pageants set in a specific geographical area.

Hawaii (1959) is 1,136 pages in paperback. The Source (1965), in which a team of archaeologists excavate a mound in Israel, is interspersed with an account from each level they unearth, is 1,104 pages in paperback. Caribbean (1989), spanning from Columbus to Castro or thereabouts, is around 900 pages.

Francis Edward Wintle a.k.a. Edward Rutherfurd also follows the same pattern, moving through the millennia of whatever area he dwells upon, featuring lots and lots of characters and not stinting on details. Russka: The Novel of Russia (1991) is 1,024 pages long; London (1997), the story of the city from Roman times to the present, covers 1,328 pages; and New York (900 to 1,050 pages in various paperback editions).

The penchant for doorstoppers still persists.

Some Indian writers also qualify. Vikram Seth’s A Suitable Boy (1993) can run to 1,500 pages in some editions, while Vikram Chandra’s Mumbai crime saga Sacred Games (2006) is nearly or over 1,000 pages, depending on the edition. 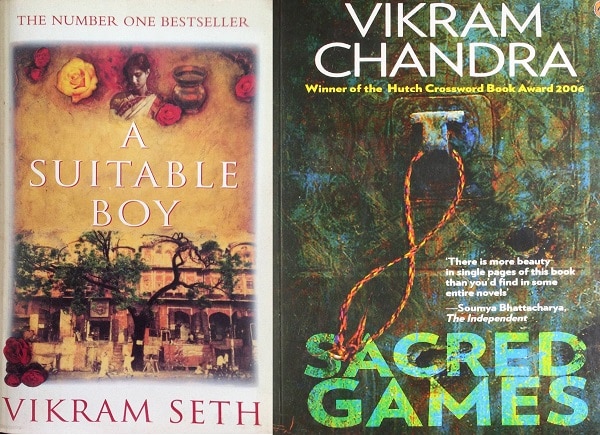 Doorstoppers, besides satiating avid readers, can also serve as makeshift exercise equipment – just holding them up to read will work wonders for hand and arm muscles and wrist flexibility, and even as a weapon, giving an entirely new meaning to the idiom “throw the book at”.

Who said books only cater to the mind?