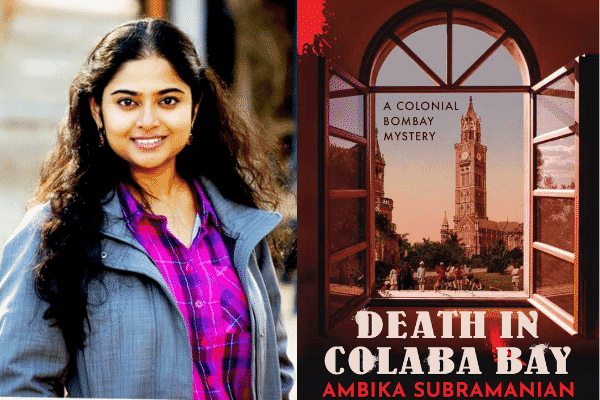 As the popular saying goes, ‘Mumbai is a city, Bombay is an emotion’ – and in Ambika Subramanian’s debut novel, it’s a feeling that pervades the pages.

New crime thriller Death in Colaba Bay: A Colonial Bombay Mystery investigates the disappearance of three young girls from a prominent school in the city, echoing an older case from central India involving the royal family of Jaiwar. Is there a serial killer on the loose? Can Inspector Arun Rao and his unlikely partner Tara Bai, an influential alumnus of the school, solve the mystery in time? Author Subramanian keeps you guessing.

The novel throws you into the deep end almost immediately, dishing out names of characters and places that can be hard to keep up with. Eventually though, you ease into the rhythm, dissecting the story just as the author intended. It’s worth observing, though, that these moments are undercut by huge portions of exposition, filling in the blanks almost too much for one’s liking.

Still, self-described voracious reader Subramanian paints a vivid picture of Victorian Bombay in less than 140 pages. We hear of tongas, diwans, and dhoti-style sari drapes, evoking a bygone era with just a hint of nostalgia. Mumbaikers will especially enjoy the references to St Thomas Cathedral, the Indian Government Mint, Town Hall, and Bombay Green (now Elphinstone Circle). In Death in Colaba Bay, it’s fair to say Bombay becomes a character in its own right.

Alongside the city is noteworthy character Tara Bai, a young widow assisting with the investigation. She’s an intriguing female presence, inquisitive and social, no doubt ruffling feathers among the Victorian Bombay ton. She’s also an advocate for women’s education, which is a topic many will appreciate in the novel. As for her counterpart Inspector Rao, more time could’ve been spent in fleshing out his character, providing backstory and substance to the promising police officer.

In Death in Colaba Bay, Mumbai-born, Sydney-based Ambika Subramanian finds the outlet to combine her passions for history, adventure, and mystery. The writing is easy to read and relatable, with an undeniable undercurrent of love for her hometown.

However, while the plot is enough to grab you, this novel remains a quick read. The mystery becomes somewhat predictable when the ode to the city wears off and the moments of heightened tension are few and far between to sustain curiosity.

Death in Colaba Bay, much like its city of inspiration, might not be everybody’s cup of tea.