Amish Tripathi: Writer who is making mythology 'cool', one novel at a time 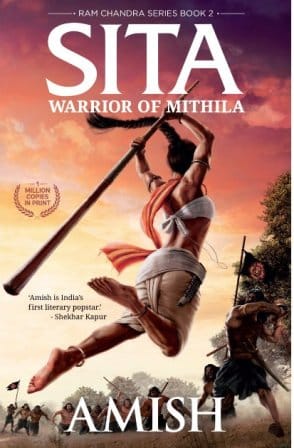 SAKET SUMAN reviews Amish Tripathi’s Sita – Warrior of Mithila in which Sita’s character is contrary to all that we have read or heard about her.

Sita – Warrior of Mithila
Author: Amish Tripathi
Publisher: Westland
Price: Rs 350 (7 AUD)
Pages: 361
His “Shiva Trilogy” — “The Immortals of Meluha”, “The Secret of the Nagas” and “The Oath of the Vayuputras” — was the fastest-selling book series in Indian publishing history. And the first novel of his five-part “Ram Chandra Series” — “Scion of Ikshvaku” — was the fastest-selling book of 2015.

In fact, even two years later, Amish Tripathi’s “Scion…” continues to dominate the bestseller list and social media cannot stop but chant praises for the popular author. In his seven-year journey as author, Tripathi has succeeded in making Indian mythology “cool”, arousing the interest of many more readers in the genre.
The second book of the “Ram Chandra Series” bears an unusual title: “Sita – Warrior of Mithila”. While Hindu goddess Sita is a well-known figure in the country, it is the “warrior” tag that intrigues. In Tripathi’s telling, Sita’s character is contrary to all that we have read or heard about her.
Sita is usually perceived as a symbol of simplicity and is defined by her submissive nature. She is the ideal Indian Woman — the “Adarsh Bharatiya Nari”. But in the novel, we come across a fierce warrior, who is not only brave but an expert in the art of warfare.
Who doesn’t know the story of Ramayana — that Rama was banished from the kingdom, that he, along with his wife and brother, spent 14 years in exile during which the fierce battle with Ravana takes place and ends with Rama’s victory. Given that the basic plot of the series is well-known, it could have been a disadvantage for the author — but he has kept reader-interest alive by going deep into the psyche of each of his characters.
The “Scion of Ikshvaku” introduced us to Lord Rama and established him as the “Maryada Purushottam” — the ideal follower of rules. In the novel, following rules and thereby maintaining order in his kingdom, was paramount for Rama and all his actions, in the novel, bear testimony to this fact.
The second novel is about Sita and it establishes her, to the surprise of readers, as a fierce warrior. She can be seen moving up and down smoothly, shooting arrows in succession, rolling on the ground for quick cover, taking a blind shot at an enemy soldier in the distance and even fighting effortlessly with a bamboo stick.
Fancy this: “Sita rolled as she fell to the ground and quickly steadied herself behind a tree. She stayed low, her back against the tree, protected for now.”
The series has followed a multiple-narrative technique, with stories told from the perspective of different characters. The first book had Rama as the protagonist, the second has Sita, and Ravana will be the central character in the third novel. From thereon, the plots will meet in a singular narrative into the last two parts of the “Ram Chandra Series”.
Tripathi has followed the basic skeleton or the narrative of the original Ramayana and, though he has fictionalised many events, the overall plot has not been tampered with.
The novel is replete with words and phrases that are in sync with contemporary readers. The author has thus, apart from attracting already existing mythology readers, turned many non-readers too into those who wait in anticipation for his upcoming books.
Finally, is this novel worth your money and time?
It is highly recommended for anybody who has an interest in Indian mythology but neither the time nor inclination to flick through the original texts. Looked at another way, popularity has been used to sell all kinds of novels — sex scandals, call centre turmoils and IIT affairs — but here is a writer using his immense popularity and creativity to retell mythological tales. In doing so, he has also maintained sound literary standards and deserves the readership that he commands.