Valerie Britton-Wilson’s search for her mother’s Anglo-Indian identity and roots among the challenges and complexities of modern India. 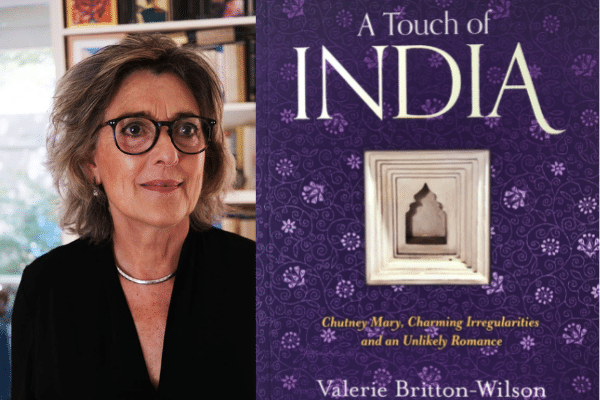 For Melbourne-based social and political researcher Valerie Britton-Wilson, India has long held inexplicable allure. In her latest book A Touch of India she details a deep cultural interest – a fascination with fabric – as well as a much more personal and profound connection.

Valerie is part Anglo-Indian thanks to her mother Pearl Creed, who was one quarter Indian. Pearl was born in Mumbai in 1921 and raised in then-Bombay under British Rule. She was often referred to as a ‘Chutney Mary’, a derogatory term used by the British for women of mixed Indian and European blood. Living a fairly adventurous time for a woman in that time, Pearl also wrote a regular Times of India column in the 1940s and worked in an ad agency.

A Touch of India starts off with Valerie and her friend Sue McFall sitting in an old Ambassador car, searching for the house Pearl had grown up in, Willingdon House. Hearing colourful stories about her mother’s childhood and teenage years captivated Valerie as a young child. However, seeing it as an adult, she struggles to identify with it amidst the confusing bedlam of India, as she puts it. Although she gets a brief look into the house her mother once occupied, she feels overwhelmed and leaves quickly.

READ ALSO: From an Indian Palace to the Outback: The Last Prince of Bengal (Review)

But on that first trip, the unlikely romance begins, and Valerie is drawn back to India multiple times. Her travels take her across the country, visiting different tourist attractions like The Gateway of India, Taj Mahal (which hold special memories for her parents) Kolkata, and Amritsar.

During these yearly trips, accompanied by her friend Sue, Valerie tries to find out about members in her family tree, helped by Pearl’s letters. Valerie starts her own garments business named ‘Moti’ (Hindi for Pearl, after her mother), forms friendships and business relationships, and ends up falling in love with the country despite its idiosyncrasies and chaotic nature.

She also compares her parents’ journey to Australia from Britain after the war, noting ironically that her mother’s Indian blood was deemed unsuitable under White Australia policy. She intertwines history and historic events with her present-day experiences and those of her mother’s bringing the best of her academic background and writer’s eye to her experiences in and of India. Along with her observances, she shares the stories of the middle-class Indians she meets, their struggles and a shocking look into a dowry murder. These personal stories from her childhood and that of her mother’s, shown in black-and-white images spread across the text, also add a new dimension to the story.

Images from A Touch of India
1 of 3

Valerie’s experiences of sourcing garments from India, and then exporting them to Melbourne makes for interesting reading, the manner of doing business in India and Australia so vastly different. But at every step of the way, the author has successfully balanced the different viewpoints and avoided cliches. There is humour and there is tragedy, all skillfully written to enthrall readers from all backgrounds.

A Touch of India also highlights her parents’ love story, how they met and the difficulties they faced when trying to get married (Pearl was engaged to someone else when she met and fell in love with Valerie’s father) and making their way from Britain to Australia. One can sense Pearl’s longing to go back home to India within her recollections, and Valerie’s need to make sense of her ‘Indianness’.

The book ends with Valerie and her sister bringing their parents’ ashes back to India and scattering them into the water in sight of The Gateway, a fitting tribute to their parents’ story and Pearl’s heritage.

For me, the book symbolises the need to make sense of a part of one’s identity, no matter how small it is. I also loved the references to various books and articles that backed up the author’s own experiences and thoughts, an ode to her academic background. Every page was written with heart, and sentiments and observations showed up beautifully.

Overall, A Touch of India is engaging and beautifully written, compelling me to keep reading until the end. The human stories and perspectives make this book special and a must-add to the bookshelf for all lovers of India – modern and historic.