A pocketful of India 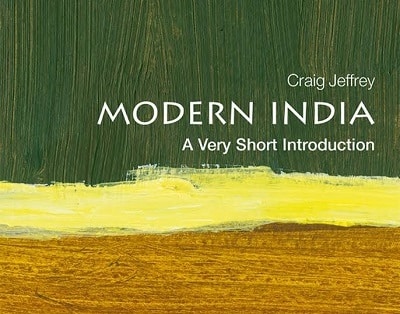 Reading Time: 3 minutesModern India: A Very Short Introduction by Craig Jeffrey. Oxford University Press, 2017
A part of Oxford’s Very Short Introductions series, Craig Jeffrey’s Modern India is a short and serious account of present-day India. Jeffrey, who is director and CEO of the Australia India Institute, takes keen interest in India – focusing his research on youth, education and everyday politics in India, and has six books related to these themes under his belt.

This book, Modern India: A Very Short Introduction, begins and ends on a hopeful note – the first chapter called Hope narrates an incident of a traffic hold-up by a group of school children in Uttarakhand, demanding a better maths teacher at their school. “Sitting in a circle on the bridge with their arms locked together they chanted their main demand and sang popular Garhwali songs,” he says. Three weeks later, a new Maths teacher arrived at the school.
The last chapter, titled Youth, also reiterates hope for India’s future, propped on the shoulders of her large young adult population. “One in ten people in the world are an Indian youth aged under 30,” the author notes. All the country needs to do, in order to be able to dream through its youth, is give them a robust institutional and infrastructural environment in the form of strong educational and healthcare systems, and better employment opportunities.
However, primary education in schools is in a dire state, with “25 per cent of teachers absent from classes during spot checks across India… The Indian state has failed to raise spending on education, which remains roughly at 3%, well below the expenditure in many Western countries.” Higher education remains equally dodgy. Vocational learning suffers while rote learning with the myopic goal of clearing examinations still gets prime importance.
Further, the lack of employment and basic infrastructure continues to exacerbate poverty and social inequities, much like at the time of British imperialism.
Jeffrey also offers a brief account of the colonial period and how the East India Company filled Britain’s coffers by impoverishing India, and the nationalist movement that drove them out. The need for a new identity for a newly independent nation and the debatable notion of caste is also succinctly handled.


Hope again resurfaces in the chapter, Making India Work, with Jawaharlal Nehru’s speech on the eve of Independence on 14 August 1947 – “A new hope comes into being, a vision long cherished materialises.”
Post-independence, reimagining and rethinking India was the main agenda for those at the helm. Jeffrey notes three major changes between 1989 and 1992. The first one relates to that of caste, where leaders from backward groups and classes became more active in politics. At the same time, another major change took shape in the form of Hindu nationalism with the formation of the Bharatiya Janata Party (BJP) in 1977. The third major shift in the early 1990s was economic reforms that paved the way for substantial liberalisation through private sector participation, increased foreign direct investment and freeing capitalists from unhelpful bureaucracy and regulations. While the reforms reduced poverty, they deepened urban-rural and gender divides and aided religion and caste-based inequalities.
However, hope survived.
And strengthened itself through social revolutions that made a place in people’s conscience through the reach of technology and education, and the notions of citizenship and civil society. These have also played a big part in encouraging aspirations and cultural expression.
Apart from hope, Jeffrey also points out the country’s inherent conflicts and contradictions in its social and cultural fabric. It is perhaps difficult to qualify India under one single epithet, given her many contradictions. The wonder, however is in the fact that she continues to thrive in her contradictions.
- Advertisement -
Share
WhatsApp
Facebook
Twitter
Linkedin
Previous articleAir India adds one more Delhi flight
Next articleThank G.O.D