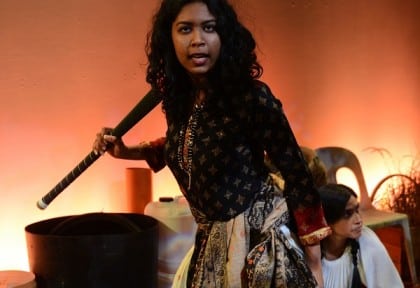 Jatinga is a village in Assam, India, made infamous by its other name, Valley of Death. It is home to the mysterious phenomenon where each year thousands of birds flock to die.


This mass avian ‘suicide’ is seen in several species of birds. At Jatinga, the birds fly to their death on a small strip of land. Experts have dismissed the suicide theory and rationalise it as a combination of factors – lights, high winds, altitude and fog – that lead the birds to their deaths.
What does this have to do with a play in Sydney, you may ask.  Jatinga, the play commissioned by Sydney-based bAKEHOUSE Theatre Company, based on award-winning Hindi playwright Purva Naresh’s work, has a poetic connection to the Valley of Death. When bAKEHOUSE’s artistic director Suzanne Millar travelled to Mumbai in 2014, she partnered with Apne Aap Women’s Collective (AAWC) to work with the daughters of sex workers in Kamathipura, Asia’s oldest and largest red light district.  The aim of the collaboration was to equip them with education and pave a way out of the distressing inter-generational prostitution.

“Jatinga is inspired by the lives of the girls of Kamathipura,” Millar tells Indian Link. “Kamathipura is much like Jatinga. It is beautiful in the day where vegetables, fruits and fabric are sold in the laneways. In the night, the place is dazzlingly lit and it’s a place where festivals are celebrated. But hidden away behind in the alleyways and above the shops are brothels.”
This is where the sad but poetic connection comes in. Year after year, thousands of women from rural India are enticed by the city lights and the promise that Mumbai holds. “The girls, some as young as 12, are brought in from many rural areas around the country by brothel agents with the promise of education, finding domestic or factory work,” she shares. All this to only have their dreams crushed, as the girls end up working in the many brothels in Kamathipura.

The set of Jatinga on its world premiere on 15 June 2017 presents a glimpse of India complete with colourful array of clothes hanging on a clothes line and the little things that define life in the country. It is the coming together of 11 actors, home-grown theatre artistes and Mumbai project partners Sapna Bhavnani and Faezeh Jalali.
“Ma’am, I’m not god nor police to confirm or deny this. I know that tonight the birds will come here in great flocks, flapping their wings… the stars come out and the village twinkles below… the birds look confused and then disoriented and then they dive down… and next day we find the bodies.”

Purva Naresh’s play opens with a tour guide explaining to Madhumita, an investigative journalist, the spectacle that he describes of the bird suicide. It then takes us to the simple yet gloom-ridden lives of Champa, Bindiya, and the three orphaned sisters Chutki, Manda and Nandi.
The five girls are each escaping a past with the hope of changing their lives. Madhumita is headed to Jatinga to cover the bird suicide phenomenon. The lives of the runaway girls and Madhumita converge when they find themselves in a train together.
During this eventful train journey the girls share their dreadful pasts with Madhumita, who promises to let the world know of their stories via her newspaper. In the descriptions of the girls’ past, the audience get a feel of seemingly unspoken things that still exist in India. Events like witch-burning, farmer suicide, abuse, child marriage, sex trafficking and illiteracy are brought to light in the play.

Champa, the feisty hockey-loving girl is forced into marriage and then an opportunity of domestic work in a big city. Demure Bindiya finds herself attached to a typewriter, which her father believes will bring her a steady employment while her prospective employers want someone qualified in the use of computers. The three innocent sisters are running away from the village mukhiya and their guardians, of whom they are terrified.
As fate would have it, their train journey brings with it many other challenges that would change the course of the girls’ lives. A tragic tale that can only be compared to the fates of the birds of Jatinga that are lured by the lights that ultimately cause their death.

The characters of Madhumita (Suz Mawer), Champa (Trishala Sharma), and Chutki (Teresa Tate Britten), the youngest of the three sisters, stand out in Jatinga. While each of their characters carry their own weight, the supporting cast’s stellar performance is unmissable.
The play may appear far removed from the first-world life in this metropolis, but it is necessary and relevant to remind the audiences of a world that is starkly different from their own. “The bigger aim of this production is to raise awareness about the many real-life Chutkis and Champas,” muses Suzanne Millar.
Jatinga by Purva Naresh, presented by the bAKEHOUSE Theatre Company and directed by Suzanne Millar is showing at KXT, Kings Cross Theatre, Kings Cross Hotel until 24 June 2017
- Advertisement -
Share
WhatsApp
Facebook
Twitter
Linkedin
Previous articleLessons from defeat
Next articleOnline visitor visa lodgement for Indians from July