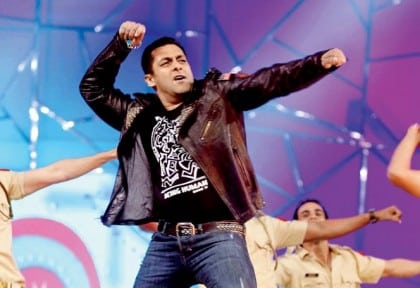 It was not my first Bollywood concert; however this one was different in its own right. Salman Khan has that special aura about him that has seen him rise from Prem to Sultan – from lovable chocolate hero to ruler of the silver screen – for an entire generation of Hindi film audiences.

It is no wonder then that the recent stage show presented at Rod Laver Arena that he spearheaded, leading a troupe of stars, turned out to be by far the largest Bollywood concert to date performed live in Melbourne.
The ardent fans went ballistic as he appeared on stage. The build-up was dramatic, as the display screen rolled shot after shot featuring the beloved star, frame by frame, movie by movie. And there he was, finally, the Sultan, entering from a suspended ramp amidst fireworks and a stage full of dancers.
The moment he landed on stage and whispered the words “Swagat nahi karoge humara”, the crowd went berserk. There was no end to the exhilaration as it rose with every performance and song.

As Salman wowed the audience with his particular style of dancing and grooving, you could tell he was enjoying himself thoroughly. And so was the crowd – clapping, cheering and dancing the whole way through.

Earlier on, the evening started with various local dance groups performing Bollywood numbers and even a fashion show.
The fan madness off-stage and the adrenaline running on stage were terrific and why not, it was the Salman Khan they were waiting for – actor, singer, producer and overall humungous personality.
At every entry or drop of a beat, the crowd would cheer and go ballistic to catch a glimpse of apna Prem. The stage was set, the music was perfect, the ambience was hyper and the fans waited with bated breath. Artists of varied genres came and performed brilliantly- Manish Paul, Bipasha Basu, Sonakshi Sinha, Prabhudeva, Daisy Shah and Badshah, all good in their own way.
The show started with the witty Manish Paul, MC of sorts, dancing to his own rap song. He kept the show alive throughout, with his usual comical banter and audience interactions.
Next entered the dazzling Bipasha Basu, in a palki, who danced to a medley of her foot-tapping songs. The crowd couldn’t stop doing a thumka or two themselves.
The concert was transformed into a rock show with the entry of Badshah along with Aastha Gill and Gurinder Rai. They performed their super hit numbers and kept the show going strong.

When spirits were running high, there came Deva re deva Prabhudeva, all by himself, no background dancers, no nobody. And when the music went Urvasi urvasi, the crowd roared at the top of their voice. The southern dancing star performed all his signature moves and thrilled the spellbound spectators with most of his famous songs.
Prabhudeva was simply fabulous and any word of expression of his calibre as a dancer will do no justice to his capability. That’s how good he was, a legend on his own.
The Shotgun girl Sonakshi Sinha, arrived with a bang and oh boy, is she pretty or what! Her Go go govinda raised the temperature a fair bit! Not only the boys but the girls too were everywhere trying to get a closer glimpse of the pretty lass.
Manish Paul invited a couple of fans, lucky guys, on stage to meet with Salman Khan.
Our main gripe with the show was that Salman did not interact much – or indeed at all – with the audience, except for gracefully thanking all for coming.
The highlight of the show was the finale, as all the stars performed one after another in a non-stop extravaganza. No one star taking centre stage, all equally performing, amidst fireworks and the non-stop music.
It was a fitting end to a show that was very skilfully choreographed, and the performers did their best at what they are good at – entertaining the masses.