Anatomy of an arangetram 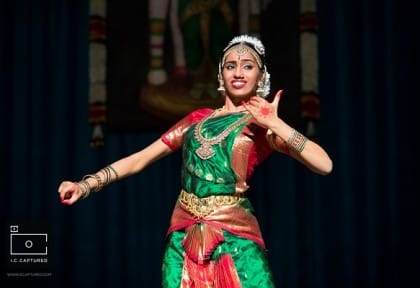 The arangetram is an event that anyone who is familiar with South Indian classical dance will recognise. But its character as a specific kind of performance – not just a “debut”, but a specific repertoire shaped by ideas about dance and its purpose – can be overlooked by even the regular arangetram-goer.

To illustrate its ‘anatomy’, I’ll be using the arangetram of Sumana Vatula, the 60th student of well-known Melbourne Bharatanatyam guru Srimathi Shanthi Rajendran (direct student of Rukmini Devi Arundale, the founder of Kalakshetra), to complete an arangetram. Accompanying her on vocal was Ahilan Sivanandan, on mrdanagam Ravi M.Ravinchandhira, on violin V.Suresh Babu, on flute Suresh Thiagarajan and of course, Srimathi Shanthi Rajendran herself on nattuvangam.

The Arangetram
The format of an arangetram today was codified in the early nineteenth century by four brothers working in the southern city of Tanjore (known today as the Tanjore Quartet), not specifically for arangetram, but for the layout of any dance performance.
What was unusual, to me at least, was the fact that each section of Sumana’s arangetram was in fact described in the words of the renowned devadasi dancer, the late Tanjore Balasaraswathi, as below.

Puspanjali
Interestingly, in her description of the traditional recital, Balasaraswathi makes no reference to pushpanjali. In the modern arangetram, it is a danced invocation to God, guru, accompanists and the audience.

Alarippu (the outer hall)
Sumana’s alarippu was an energetic and powerful beginning. A dance of pure recited rhythm, with no lyrics or tune, the movements of alarippu, according to Balasaraswathi, relax the dancer and make her “single-minded’ in preparation to dance.

Jatiswaram (the half-way hall)
Sumana presented a beautiful jatiswaram in the Carnatic raga Bhairavi. Like the Alarippu, the jatiswaram is also solely made up of rhythmic syllables but, as Balasaraswathi puts it, with “the added joy of melody”.

Sabdam (the great hall)
“It is here that compositions, with words and meanings, which enable the expression of the myriad moods of Bharata Natyam are introduced”. Instead of a traditional sabdam, which in fact was a secular courtly genre often dedicated to the praise of rulers, not gods, Sumana danced to a keerthanam (a structured composition) on Lord Ganesha, “Sri Mahanganapathy” in raga Gowla, by the Carnatic composer Muthuswami Dikshitar.

Varnam (the holy precinct)
Varnam, can mean amongst other things “colour” and “interpretation”; the varnam is the centerpiece of the arangetram, marrying abstract rhythm, musical composition, and expanded abhinaya, or expression. Balasaraswathi described it as “provid[ing] the fullest scope” for the dancer’s creativity. Sumana’s varnam was “Maye Mayan”, a composition on the goddess in raga Thodi by Madurai Muralidharan, with lively storytelling and complex rhythmic interludes. I was a little bewildered however by the somewhat demeaning story selected for presentation – a story of the goddess being turned into a peacock by her husband Lord Shiva for her wandering attention!

Padam and Bhajan (the inner sanctum)
Balasaraswathi describes the previous pieces in the dance repertoire as the “ordeal of fire” that the dancer must pass through before being qualified to dance the padam, a lyrical genre of love poetry dating to the seventeenth century. In a reversal of the traditional padam, Sumana danced to a poem of devotion about love for, not a god, but a goddess – the goddess Abhirami: ‘Omkara Nayakiye’, by an unknown composer. This beautiful piece, set to raga Hindolam, was the highlight of the performance – Sumana’s expressions and storytelling were evocative and captured the wonder and enchantment of the goddess’s relationship with her devotee.
In this section she also danced to a modern keerthanam ‘Kapalini’, in raga Palini by Lalitha Sivakumar on Lord Shiva, god of dance. This piece was danced with vigour, conviction, and exciting choreography.

In Balasaraswathi’s dilineation, the bhajan, or devotional verse, comes last of all; it is where a devotee “takes to his heart the god he has so far glorified outside”. But the modern arangetram usually puts it second-last. Sumana danced with expressive abhinaya to “Charanam Charanam”, a dance-bhajan in praise of Hanuman, the beloved monkey-warrior of the Ramayana.
Thillana (the “final burning of camphor”)
Thillana, rhythmic syllables set to a raga with energetic variations and striking poses, usually concludes the modern arangetram performance. Sumana’s arangetram finished on a joyous note with M.Balamuralikrishna’s masterpiece of a thillana in raga Kuntalavarali.
Images courtesy of I.C. CAPTURED (www.iccaptured.com)