An ode to Raghu Dixit 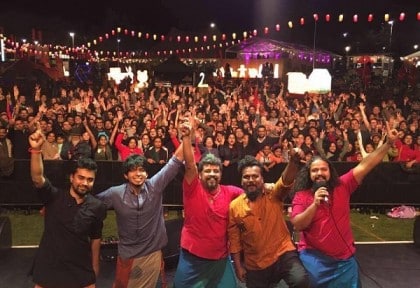 Voice fragrant with the earth, rumbling like rivers in spate, soft as flowers, loud as thunder – singing of people, villages, cities of India, highs and lows, of the ordinary and the exalted, a voice like none other.

When I first heard the earthy, powerful voice of Raghu Dixit, I was in delighted shock. This happens to me when I come across rare phenomena like RD, which is what I will call him the rest of the way for ease. Another such voice is Kailash Kher. But more on that some other time.
Raghupati Dwarakanath Dixit, was born on 11 November, 1974. His music is a mix of ethnic Indian folk and styles from all over the world. The main artist of the Raghu Dixit Project, he is married to Mayuri Upadhya, artistic director of a contemporary dance group, Nritarutya.
I have heard his music for the past six years or so with an almost desperate dream to somehow watch him perform live along with his troupe. I tried to do this more than a couple of times in Bangalore, which is where he performs quite often. It wasn’t to be.
Finally, thanks to the Confluence Festival of India in Australia, I witnessed it all, jumping and singing along with the crowd, and my little daughter next to me, at the large open-air stage at Elder Park.
‘Lokada Kalaji’ had everyone memorising the chorus at the behest of RD, while ‘Jag Changa’ had most of us getting wobbly-kneed from all the jumping up and down. ‘Amma’ tugged at the heart strings while ‘Para Shivana’, ‘Mysore se aayi’ and others had everyone asking for more.
Clad in ethnic shirts of thin handloom cotton, lungis and dancing bells, in the case of RD, the band appeals to every sense.
We got pics and bought CDs and even now our daily music fix in the car is his.
The next day saw me back at the Ukiyo Tent to watch and cover the Piya Behrupia Hindi play, a translation of Shakespeare’s Twelfth Night, again a part of the Confluence festival.
I thought I saw RD sitting and looking at his mobile phone, and before I was sure, he looked straight at me and beckoned, asking me to sit next to him, with his whole troupe.
With a slightly raised heartbeat, I went and sat with them!
This took the experience higher by many notches, since I could see how impressed he was with the music, hilarious dialogue and the whole play itself.
As bonus, I got to chat with him in the breaks. I came to learn he is working on the music of six Indian films, two of them for Bollywood.
His journey to music was different from most. He was a scientist in Belgium and at the behest of friends, and, for sure, an inner calling, he made his way back to India. He took some time to get his first break in Mumbai. Just when he began to think he had made a big mistake, following his passion for music, he hit the big time. There has been no looking back after the release of his first album by Vishal-Shekhar in 2010, which reached number one on the iTunes world music charts in the UK.
The Raghu Dixit Project travels incessantly and along with Raghu Dixit’s foray into the film worlds of various states of India, his band now plays regularly, touring India and the globe.