An Indian eternal man and the philosopher's stone quest 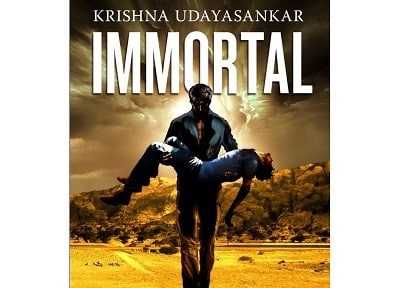 Some mythological/folklore motifs can be found in all civilisations, and one yardstick of their prominence in public perception is the extent to which they figure in popular literature, especially thrillers. This was one genre the West scored higher, with Indians most remiss in making use of a bountiful heritage – till now.
A ‘philosopher’s stone’, capable of transmuting base metals into valuable ones, or conferring everlasting life, is not only the preserve of the Harry Potter universe, and indeed, a man fated to remain immortal, ranges beyond the Wandering Jew. But we never recognised them in our folklore.

This is where novelist Krishna Udayansankar steps in, to give them their due, in Immortal.
Already having a creative and most different reinterpretation of the Mahabharata to her credit in the Aryavarta Chronicles trilogy, her new venture features the epic’s most potent, promising but scandalously underutilised character – Ashvatthama, son of the preceptor Drona.
But we come across him in our age where he now goes under the identity of Professor Bharadvaj, a historian known for hunting lost artefacts for well-heeled clients. But he makes clear he is “not your Indiana Jones variety of tomb-raiding, whip-snapping adventure hero”.
Comparisons with Dan Brown and the spate of other mytho-thrillers are obvious, but Udayasankar, whose corpus also includes a novel based on the founding myth of Singapore and full-length collection of prose-poems, makes her contribution stand out in some vital ways.
Key among this is the character she has chosen, and his demeanour – hard-bitten and jaded cynical, snarky, restless, ruthless (when needed), and not still content with his fate. Then the point of view is first person, which makes for some incisive looks at philosophical issues, including mortality and destiny. It also offers tantalising recollections of a rich tapestry of global history and culture our protagonist has participated in or witnessed closely.
Commencing with a rather grisly subterranean encounter in South America – which gives us a striking impression of his prowess, the story proper begins aptly in the eternal city of Varanasi where we get better acquainted with him, and his friend Hariprasad Namdeo, alias Baba Shivdas, the only one who knows his secret.
However, this is also a point when the professor is convinced it is time to change identities again as he been doing frequently through his 4000-year existence. But as he is preparing to vanish after a dip in the Ganga, fate intervenes – via his mobile phone.


It is his assistant in Delhi, telling him that a persistent client seems promising, that forces him to change his mind. It is a young, rather determined woman who seeks to enlist his service to find the Vajra – an Indian equivalent of the philosopher’s stone developed by legendary ancient philosopher Nagarjuna.
Our man is first disappointed and declines, terming it a futile quest – for he has been searching for it unsuccessfully for eons now in an attempt to understand his own condition. He is slowly won around after she produces what she claims is a piece out of the three in which it was broken and hidden at dispersed places by its creator. Also helping him is the spate of attacks on them by some unidentified assailants.
The search takes them on a racy, hazardous quest to the Somnath Temple, the Kashi Vishwanath/Gyanvapi complex, Mount Arunachalam in Tamil Nadu, the Hingula Devi in Balochistan before a shocking, cliff-hanger of a climax in suburban Bangalore. And then friends and foes are not what they seem and heartbreaking choices have to be made.
Udayasankar not only creates a vigorous pace but spices our interest with brief, most well-researched digressions into the professor’s past, including in ancient Greece and its imperial Persian foe, the Crusades (though Saladin was not in power in 1160) and even down to Netaji Subhas Chandra Bose and the INA’s valiant but doomed fight.
Most of these demand a fleshing out in subsequent instalments, for one does hope this is the debut of a new series since the character is too valuable for a sole appearance. And when you get to the final paragraphs, you will crave the next comes early.
- Advertisement -
Share
WhatsApp
Facebook
Twitter
Linkedin
Previous articleWritten in the stars
Next articleLet’s pickle while the sun shines