An Aussie tribute to Rahman’s music 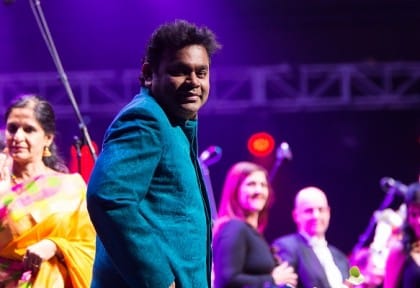 The focus was on Rahman’s extensive music catalogue, not the Mozart of Madras himself

While the Melbourne Symphony Orchestra proved, yet again, why they are a world-renowned orchestra by performing AR Rahman’s incredible music, the maestro’s brief appearance left the audience feeling somewhat disappointed.
The focus clearly was on Rahman’s amazing repertoire, not him, as he made only two appearances during the three-hour show.

Held at the Sidney Myer Music Bowl, The Music of AR Rahman show was presented by Arts Centre Melbourne in association with Melbourne Symphony Orchestra and Charindaa (Charities through Indian Art in Australia), for the inaugural Asia-Pacific Triennial of Performing Arts Festival (AsiaTOPA).
The Indian community, and not just in Melbourne, were all agog when the AR Rahman event was announced last year. The event was sold as a ‘one-of-a-kind’ concert in which the ‘Melbourne Symphony Orchestra would perform The Music of AR Rahman, with the superstar himself taking to the stage as special guest’.
The superstar composer himself had stated categorically in an interview with Indian Link that his intentions would be to sit back and enjoy the music together with the audience. “I look forward to closing my eyes and enjoying the music played by some of the world’s best musicians,” he had said then.
And that’s exactly what he did, albeit to the disappointment of some.
The Melbourne Symphony Orchestra, led by British conductor and music director Matt Dunkley, dipped into Rahman’s cache of work with finesse.
In the first half of the concert, Rahman came in to play the piano for his score in Lasse Hallström’s The 100 Foot Journey and left the stage indicating to the audience that he would be back.
MSO’s selection comprised of Rahman’s notable compositions from Lagaan, Mangal Pandey-The Rising, Swades, Warriors of Heaven and Earth and more. The synthesis of traditional Indian music with global sounds was accomplished well in the orchestral arrangements.

The spotlight was maintained and well earned by visiting artists S. Navin on flute and Asad Khan on sitar. The applause was thunderous as S. Navin brought the melody of love alive with Roja, Rahman’s debut Tamil film soundtrack. The music for Roja fetched him the National Film Award for Best Music Direction.
The 30-strong Polyponic Voices Choir, under the direction of Michael Fulcher and language coach Shriram Iyer, also proved their vocal mettle in charming renditions of some of Rahman’s songs.
Digital displays and projector lights in the background offered an aesthetic ambience, but the outdoor venue had people huddling together to ward off the evening chill.
Post interval there was still no sign of Rahman and the audience started getting a tad restless. They sat through a melodious tribute to Indian composers and beautiful Indian actresses before calling out for Rahman to come back on stage. It was not to be, as MSO continued to play scores from Bombay, Kochadaiiyaan and Robot.
As the show progressed, Opera Australia Soprano Julie Lea Goodwin and Tenor Nicholas Jones received audience appreciation for performing the vocal stage version of ‘Lothlorien’ from The Lord of The Rings.

Towards the end, Rahman did return to play the piano for the concert’s inevitable finale on his signature piece Jai Ho from Slumdog Millionaire. The score for this film earned Rahman two Academy Awards for Best Original Music and Best Original Song. He was joined by the operatic duo who managed a suitably up-tempo and rousing Hindi rendition of the engaging and dynamic song.
At the cocktail event held in the Merlyn Myer Room prior to the show, Rahman’s appearance was also brief as he waded through the selfie-hungry crowd to disappear into the sound studio. Media and other guests pounced on an opportunity to take a photo or talk to him; however, the publicity-shy composer was hastily whisked away leaving the guests to hobnob with each other instead.
Rahman recalled fond memories of his last concert in Melbourne, held at the Rod Laver Arena in 2005. Chatting with Indian Link, he told how the audience lit their mobile phones to send little halos of light as they swayed to his music.
“It was the first time I saw this happen at my concert and since then it is repeated in all my shows,” he reminisced. “But the first time always remains fresh in my mind.”
Melbourne fans will not forget that amazing show, and sadly, what they will remember from this one, is that there just wasn’t enough of Rahman.
Photos: Mark Gambin