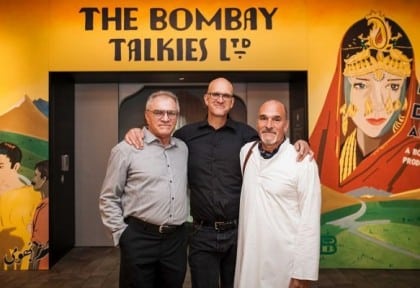 Bombay Talkies, not to be confused with the Indian anthology film of the same name, is a comprehensive collection of Indian film ephemera from the 1920s and 1930s. The rare exhibition is currently displayed, for the first time, at the Australian Centre for the Moving Image in Melbourne (ACMI) until 2 July.

Both the film and art collection commonly celebrate the emotion of Indian cinema in two significant ways: one through innovating, and another through curating. While the movie had a keen eye on the sociopolitical climate of its time, the collection unearths rare archives of tremendous interest, both manage to do so engagingly.
Anyone who has an interest in films will enjoy the historical feel and the story that surrounds Bombay Talkies, one of India’s popular movie studios of the 1930s. Bombay Talkies was the first corporate studio, in India, to be listed on the Bombay Stock Exchange.

Founded in 1934, Bombay Talkies was co-owned by Himanshu Rai and Devika Rani. The studio produced 40 films over 20 years and was considered as the most technically advanced Indian studio of its time.
Besides exploring the history of the influential Bombay Talkies, Fiona Trigg from ACMI has curated an exhaustive Indian film archive, in collaboration with local Dietze family who are owners of the memorabilia.

Australian Peter Dietze is the custodian of the enormous collection made up of photographs, letters, telegrams, posters, even bills that hark back to the time of his grandfather Himanshu Rai and his beautiful wife Indian actress Devika Rani.

Peter Dietze, who was born in Australia and has German ancestry, was surprised to discover that his grandfather was Indian and one of the most prominent luminaries of Indian cinema in the 1920s. His mother Nilima was the daughter of Mary Hainlin, a German dancer who was once married to Himanshu Rai.

It was Mary who introduced Himanshu to the German film industry, influencing his career in the arts. (Himanshu was actually a lawyer and was studying for the Bar in London). Himanshu later went on to marry Devika Rani, grandniece of Rabindranath Tagore and the most legendary of India’s actresses.

“Finding the photos of this Indian man, who looked like me, opened a whole Pandora’s box,” Peter revealed to Indian Link in 2010, with the idea for the current exhibition already in his mind. “I became totally immersed in his life and works and contribution to Indian cinema, as well as his attempts to tell the western world Indian tales.”
Peter and his brothers Paul and Walter spent time and effort in discovering more about their family’s Indian background and in the process acquired the collection of over 3000 items. Some of them are showcased, preserved with great care, at the Bombay Talkies exhibition at ACMI.


The displays offer many fascinating links to early Indian cinema including footage of silent films like A Throw of Dice, Light of Asia and Shiraz. Most prominent is the life-size, rather impressive image of superstar Ashok Kumar that adorns the wall not far from a similar one of Devika Rani.
Ashok Kumar was a lab technician in Bombay Talkies but Himanshu Rai elevated him to the role of a lead man when his wife Devika Rani was said to have eloped with Najmul Hasan, who was to play the original lead.

“When I went to India I saw a bust of my grandfather in actor Ashok Kumar’s home,” revealed Peter during the official launch of the exhibition recently.
Also intriguing, is the family tree that maps links between the families of Rai, Rani, Roerich (Devika Rani married painter Svetoslav Roerich in 1945) and the Dietzes. Images and items relating to Devika Rani form a substantial part of the exhibit. Audio visuals with remastered or archival footage add to the ambience and mystery.

The interesting content of the archival letters help in constructing an image of prevalent issues, joys and challenges faced by Rai and Rani in running the studio. The documents trace the friendships created during their stint in Germany that proved beneficial for them as master technicians like Josef Wirshcing and director Franz Osten worked in collaboration with them and brought international professional standards to India.

At least two of the trilogy of films that Rai produced, and which are believed to be the pioneering films of Indian cinema, have been seen by Australian audiences in recent years. They have been digitally restored by the British Film Institute, in whose archives they had been lying since 1945. Today, they are famously played to the accompaniment of live symphony orchestras. British-Asian composer Nitin Sawhney wrote the score for A Throw of Dice (Prapancha Pash). The 1929 film is loosely based on the gambling episode from the epic Mahabharata. Of the other two films in the trilogy, the 1925 Prem Sanyas (The Light of Asia) is based on the life of the Buddha, and the 1928 Shiraz (Siraj) on the life of Mughal emperor Shahjahan.
Peter hopes to take the exhibition to other countries before finding the right place for it in India “where it belongs”.
- Advertisement -
Share
WhatsApp
Facebook
Twitter
Linkedin
Previous articleIndians must stop funding poor governance
Next articleAustralia Day, Republic Day