An Adelaide tribute to a legendary musician 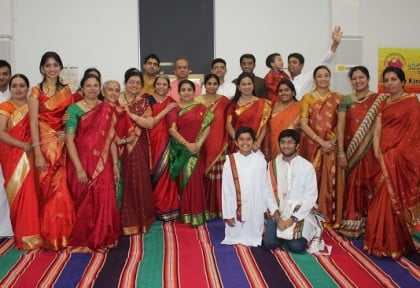 Purandara Das Aradhana in Adelaide was conducted by Adelaide Kannada Sangha Inc. in early April. Aradhana literally means worshipping or glorifying, and this great proponent of Carnatic music is certainly fit to be glorified. And it was time to do so. Even though Purandara Dasa’s kritis or compositions are often sung at classical music concerts, this is the first time in many years that a whole evening dedicated to the great composer was held in Adelaide.

According to legend, Purandara Dasa is supposed to have composed some 475,000 songs. He had dreamt of composing 500,000. So folklore has it that he was reborn as Vijayadasa and completed the remaining 25 thousand keerthanas! The songs are all in praise of Lord Krishna or Vishnu in Kannada and some in Sanskrit. They are in simple language taking the messages in the shastras and puranas to everyone. He used elements of colloquial language for his lyrics and introduced folk ragas into the mainstream so that even the common man could learn and sing them.
Purandara Dasa is widely referred to as the Pitamaha (father or grandfather) of Carnatic music. Composer, singer and great proponent of the art, he is one of the most important music scholars of medieval India. He formulated the basic lessons and even the first Raga – Mayamalavagowla – as the first scale to be taught to beginners. This is followed to this day!
The evening glorifying the great Dasa and devoted to his compositions, was simply delightful. It began with a veena recital by Neelakshi, a visitor to Adelaide. Next, several well-known singers on the Adelaide Carnatic circuit took to the stage like Gowri Dhabade, Jaishree Badrinath, Mallika Prasad, Suma Rudrapatna, Varuni Karthik, Raji, Abhishek, Girish and others. Young Roshni Mubarak played the ever popular ‘Bhagyada Lakshmi Baaramma’ beautifully on the violin.

It was wonderful to note that some devotees of the art form, visiting from India, also participated by rendering a krithi in honour of the great composer. In fact, one of the visiting elders, Mrs Kulkarni, spontaneously asked if she could sing. Her rendition of ‘Rama Parama Naama’ was full of bhakti and showed up the real essence of Purandara Dasa’s legacy – devotion and the oral tradition of common people having his songs at the tip of their tongue and singing them as a matter of everyday routine.
The second half of the evening was a group presentation of some of the Navaratna kritis organised by Suma Rudrapatna and Abhishek. They had children singing some of the beginners’ songs in the traditional manner. Eight children from 5-16 years sang four songs in great accord. It was heartening to see the interest shown by these youngsters. All the singers were accompanied by Aravind on mridangam, Venkat on tabla and Sangeeta on the veena.
The adults then joined in to present their songs, beginning with Jaya Janaki Kanta glorifying Lord Rama and continuing on to popular compositions on Sri Krishna. These included ‘Aadidano Ranga’, ‘Odi barayya’, ‘Bandanene Ranga’ among others and concluded with an apt mangalam, ‘Indina dinave shubha dinavu’ meaning today is the most auspicious day… whenever you sing the glories of Lord Krishna, that is the most auspicious time. And so it was.

A beautiful evening with soaring voices that praised the Lord and a great saint. Made more beautiful by the joy in the faces of the little children who could now sing classical songs – made possible by the saint-composer Purandara Dasa who thought up simple ragas that beginners too could sing.

The MC Manjunath did an excellent job of introducing the great saint composer and then explaining each song, the meaning as well as the devotional element in each.
Suma Rudrapatna, one of the main organisers, when asked about this first Purandara Dasa Aradhana, said humbly, “It had been organised once before, about twenty years ago, I think. This time Adelaide Kannada Sangha backed this dream of mine and the seniors and singers in Adelaide gave me full support. We organised group practices and along with me Abhishek taught a couple of the group songs too. Girish taught us the Mangalam. So it was genuinely a group effort.”
I am sure it was quite an effort to get children, adults and instrumentalists to prepare and practice the songs. But it was worth the effort, I must say, and an evening enjoyed by all. Adelaide Kannada Sangha president Shiva Shankar Gowda said he plans to organise more such events.