An actor of calibre 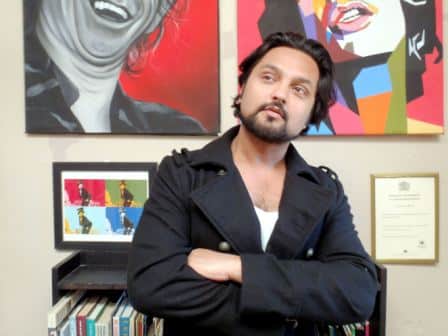 “All the world’s a stage and all the men and women merely players“– these words from William Shakespeare can best describe the passion for theatre that comes across when you meet 35-year-old Neil Khare. Neil has recently received great acclamation for his portrayal of Giles Corey in the classic American tragedy play by Arthur Miller called The Crucible, that was directed by Dan Graham, and is a production from the Lane Cove Theatre Company in Sydney.
Neil truly loves being on stage. It’s the rehearsals and auditions that make him nervous, not the actual acting. “Acting is my passion. It’s an escape from reality wherein I can create this alternate world around me,” he says. “When I’m on stage, I feel a total rush of adrenaline. It’s interesting how actors are required to interpret text, understand feelings behind the text and understand the subtext. Each word needs to be enacted. Just being a part of a creative process gives a new meaning to my life. It is challenging, and at the same time exhilarating and fulfilling,” he adds.
Neil caught the theatre bug early in life. “I remember sitting in my classroom in school and churning up ideas and creating all sorts of scenarios in my mind. On being introduced to Shakespeare, I would tend to submerge myself in the text, and imagine myself to be one of the characters in the story. I could create explicit visuals in my mind while reading through Midsummer’s Night Dream, or of becoming Macbeth or Othello,” Neil reminisced.
Born in Kolkata, Neil hails from a middle class Maharshtrian family. But it wasn’t theatre that brought him to Sydney. After finishing his schooling from La Martiniere for Boys in Kolkata, he came to Australia to finish his Bachelors in Hospitality and Management.
“I came to study Hospitality in Sydney in 1996-1997. But actually I was escaping India to follow my dream and my love for the arts.  I completed my degree here but somewhere down the line my passion pushed me to doing theatre as well. I joined National Institute of Dramatic Art (NIDA) and did few short courses to understand theatre better,” he reveals.
After facing several rejections, Neil almost gave up on his dream to be an actor.  But with encouragement from his sister Tanya, he was pushed to give an open audition for the role of Giles Corey in The Crucible.
Director Dan Graham had no qualms about selecting him for the part. “Neil auditioned and immediately impressed me not only with his acting ability, but with his sensitivity and kindness which I thought more important to the character of Giles Corey, than considering ethnicity when casting,” says Graham. “It was mainly a young cast and Giles Corey is an elderly man, but as an actor, Neil adapted his posture and voice accordingly and brought Giles to life on stage. I feel he is a valuable actor in our ensemble,” adds Graham.
Interestingly, the 35-year-old plays a 7-year-old man who is knotted with muscle, is canny, inquisitive and still powerful. It wasn’t an easy portrayal. And he had to prepare intensively for the part.
“Giles, even at 71, is physically a well-built man, so making him seem physically weak wouldn’t do justice to his character. So I would get a bit hunched, greyed my hair, and on stage I’d rub my knees and speak like an old man. I also did intensive voice training and worked on my accent,” he claims.
Being the only non-Caucasian in a cast of 18 people was a unique experience for Neil. “In the beginning I put up a barrier, but within the first few weeks that barrier had disappeared. I got an opportunity to work with some extremely talented fellow actors who helped me perform better. We had two months of rehearsals and by the end of the show, the cast became a family,” he states.
Neil’s dream is to finally work in mainstream Australian theatre. “It’s hard, because there is not much diversity in Australian theatre; the issue is colour blind cast or colour blind auditioning.  To explain, directors and producers prefer staying true to the original pieces, so if I wanted to play Macbeth, local productions would not be as open to casting a person from an ethnic background. I personally feel that theatre here is fairly close-minded compared to other countries. I have done a number of South Asian plays, but I have a great interest in Shakespearean works. Can you imagine an Indian ‘Antonio’ with a Caucasian ‘Portia’ in a Merchant of Venice rendition at the Opera House?” he asks, tongue in cheek. However, I am very thankful to the Lane Cove Theatre Company for giving me the opportunity to be part of The Crucible which was a challenging and demanding piece,” he adds.
Among his other hidden talents are painting, photography and singing. “I love art, I tend to walk into galleries explore what painters try to depict through their craft. I also hope to be a part of a Broadway musical one day,” he says. During his leisure, Neil loves spending quality time with his family and his pets. His sister Tanya is probably his biggest fan. “I feel very proud watching Neil perform on stage, and I plan to follow his footsteps and venture into the world of theatre,” she reveals.
This is Neil’s comeback year (NOT SURE WHAT THIS MEANS) into theatre, and he also wants to get into production, “I want to produce theatre that pulls at every emotion, creating work that is controversial, work that deals with the psyche. Theatre needs to be diverse and reflect our society in Australia, but most importantly it should create work so that folks out there who have dreams, vision and great passion for the craft are able to perform not just for the money or fame, but for the love of theatre,” he says with emphasis.