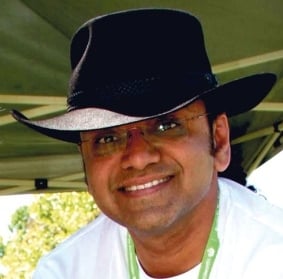 Working behind the scenes, dream merchant Anupam Sharma has over the past two decades adopted many different roles – cinematographer, casting director, consultant, writer, facilitator and film expert. In the process he has forged strong links with individuals, companies and countries carving a niche for himself in the fickle world of films. His brainchild Films & Casting Temple is an icon in the entertainment industry and credited with single-handedly bringing India and Australia together, selling their individual brands like never before.
Nominated by NSW Premier Barry O’Farrell, in 2013 Sharma has taken on yet another exciting role – that of Australia Day Ambassador.
The Australia Day Ambassador program is a nationwide initiative that sees high achieving and proud Australians attend local Australia Day celebrations in towns and cities across the nation.
From relatively humble origins in 1990, today there are around 400 ambassadors who volunteer their time and energy to inspire pride and celebration in hundreds of local communities.
“As an Indian who made Australia home, it is humbling to receive this honour not only because it also happens to be Indian Republic Day but also because it indirectly honours the team of people with me who have been tirelessly working for strong film links between India and Australia”, Sharma told Indian Link.
Anupam Sharma’s place of choice was the 3000-strong community of Coonabarabran in Warrumbungle Shire of northern NSW.
“Country Australia has always been so appealing to me. The landscape and the scenery are quite breathtaking. I have done location surveys in this region (thanks to Screen NSW), have filmed in Dubbo, as well as in many regional areas of Australia and NSW, so I jumped at the opportunity to visit such a friendly and beautiful region again,” he explained.
“To be an Australia Day Ambassador in Coonabarabran which has been ravaged by bush fires, and engage with the locals, was even more poignant”, he added.
“The whole experience was so fulfilling. It was like a cherry on my cake. I was supposed to be an Ambassador but felt more like an apprentice learning from the community, their amazing spirit of mateship, of volunteer work, and humanity which is fast eroding in the hustle bustle of big cities but refreshingly alive in small towns,” he acknowledged.
It was so touching that despite having faced so much hardship barely the week before, the whole community rallied around for Australia Day, he pointed.
While he was moved by camaraderie and hospitality of the country region, one woman certainly made a lasting impression on the respected filmmaker. “The conductor of the local band was particularly bubbly and enthusiastic, making sure I was well looked after. I saw her at the breakfast meeting and again at several functions throughout the day. When I finally got talking much later, I found out, she had lost everything in the recent fire. Yet she was warm and welcoming. This struck a deep chord. This is the true spirit of Australia,” he remarked.
“Australia Day may have started primarily to celebrate the arrival of the first fleet, but over the years it has developed into a celebration of all things Australians for all of us migrants,” he added.
Sharma who was recently named as one of the 50 most powerful and influential film professionals in Australia by the prestigious Encore Magazine took part in a range of activities throughout the day, including flag hoisting and citizenship ceremonies.
Addressing the community gathering earlier, Sharma stated, “It is your resilience and Aussie spirit which makes the terrible fires of last week look like history. It is your Aussie spirit which won.”