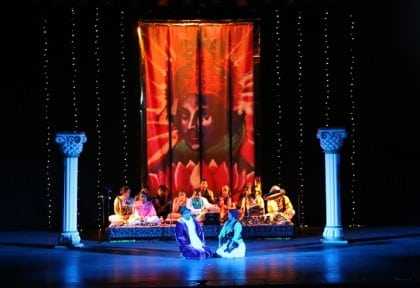 Interpretations of Shakespeare’s work are plentiful, however Piya Behrupiya comes with a unique flavor that is decidedly Indian. Presented in the form of a Nautanki, punctuated with dancing, singing and crowd-pleasing gags, the rollicking musical went down a treat with audiences in Melbourne recently. The Hindi translation of Shakespeare’s Twelfth Night was performed in the Deakin Edge at Federation Square as part of the Confluence Festival of India in Australia.
Piya Behrupiya first premiered at Shakespeare’s Globe in London attracting rave reviews. The award-winning play has since been performed over 200 times, and proved popular with audiences in India and around the globe. In Australia, the delightful play was presented in Melbourne, Sydney and Adelaide.
Director Atul Kumar’s take on the Bard’s famous comedy can be best described as kaleidoscopic. This creative production is many hued, complex, rapidly changing and in parts an assault on the senses. With every twist you see a different character, diverse genres, various accents and a lively pattern of poetry and comedy emerges. Drawn to the multitude of content, the audience tolerates and even enjoys the often loud, sometimes over the top tomfoolery.
The original names of Shakespeare’s characters were retained and his complicated plot was translated into its desi avatar to comic effect.
The lovesick Duke Orsino, who is in love with Lady Olivia, entrusts his page Cesario to express his love for Olivia on his behalf. Cesario, who is actually a woman named Viola in disguise, falls in love with the Duke. Meanwhile, Lady Olivia falls for Cesario thinking she is a man, and thus unfolds a story of muddled identity and unrequited love. As a sub-plot Olivia’s staff and uncle conspire to humiliate her pompous steward Malvolio.

Titas Dutta as Cesario/Viola shouldered a substantial chunk of the play with amazing versatility. Rubbing off the false moustache in disgust and pining over her love with some real tears, she oscillated effortlessly between comedy and pathos.
With a fair share of punch lines to land, other characters complemented the lead trio and brought a playful spirit. Viola’s twin brother Sebastian, Olivia’s Uncle Sir Toby, his companion Andrew, Olivia’s steward Malvolio, her maid Maria and clown Feste (Phool Singh) each managed to create a distinct impression. Their shenanigans added spice to this creative concoction. The actors that essayed these roles were remarkably talented, possessing both singing and acting prowess.
The artists started the play by paying obeisance to a huge portrait of Shakespeare that formed the main backdrop. The plot unfolded with a combination of assured vocals and dialogue with on screen subtitles in English filling-in the narrative detail. The stage design was kept minimal, the costumes a mish-mash of colours in styles both rural and traditional. With a sprinkle of Kabir’s couplets, Sufi chants, and qawwali beats, the songs were multilingual with a folk flavour.
A connection with the audience was created with contemporary themes, though the references resonated mainly with Indian sentiments. A peppering of modern elements and some choice English words delivered with perfect comic timing added to the laughs.
If scheduled on a weekend the show would probably have attracted a larger crowd. A snip here and there to reduce the length would also have been desirable.
Despite its length and loudness, the celebratory resolution that formed the dominant endnote of the play fetched joyful reactions from believers in happy endings.
Indeed, at the conclusion of the two hours, the Piya Behrupiya madness received a standing ovation from the audience.