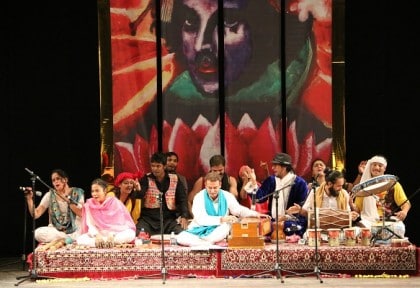 From start to finish, Piya Behrupiya is an awe-inspiring medley of full-blooded dance, acting and music. Performed in the Ukiyo Tent for the Confluence Festival of India in Australia, the theatre was a small and intimate setup giving the actors an opportunity to interact with the audience in a unique manner.
Filled with a cast of unforgettable characters, the performers from The Company Theatre of India combined skilled, natural acting with lilting songs both folk and classical. Voices capturing the diverse breadth of India complemented the spirited and spontaneous dances.
Based on Shakespeare’s Twelfth Night, the story combined high comedy with cruelty and pangs of unrequited love with loveable tomfoolery.
The characters retained the original Shakespearean names except that they used the best possible rural accents in which to call each other out. Cesario thus became Cejaario and the dialogues, mostly in Hindi, had smatterings of Punjabi, Urdu and Bihari. The actors were from various parts of India and brought into their acting their own accents and regional flavors.

Clothed in Indian dhotis, kurtas, lehenga-cholis, ghaghra, sherwani and even the lungi, there were three comparatively demure-looking instrumentalists who were stationary. The rest were a riot in every way and one could barely find anyone still for long. When a few enacted a scene, the rest were still contributing, sitting beside the instrumentalists interjecting via song, punchy interruption or exaggerated reaction to the what was happening centre stage.
One who had been exposed to India and its nuances could fully grasp the subtle and raunchy mannerisms and dialogue that lay in the linguistic turns of the phrase and physical expressions. Translation was being projected on two screens and I could see the non-Indian viewers enjoying themselves thoroughly too. The theatre direction and translation by Atul Kumar and Amitosh Nagpal respectively is inspirational. One wants the play to go on and on and at the end of the 120 minutes there is a feeling of complete satisfaction, coupled with awe on so many levels.
Led by Atul Kumar, The Company Theatre was established in 1993 and continues to work with a singular commitment to theatre. A non-profit organisation, TCT is a theatre ensemble of professional and amateur theatre artists. They seek to explore inter disciplinary art forms and to develop diverse artiste and audience communities all over the world
Sitting right beside the inimitable folk-rock icon from Karnataka, Raghu Dixit, took the experience higher many notches for me, since I could see how impressed he was with the music, hilarious dialogue and the whole play itself. He led the audience to a standing ovation at the end. I was glad witness to the invisible but tangible bond of mutual artistic appreciation that exist between the artists of The Company Theatre and Raghu Dixit.