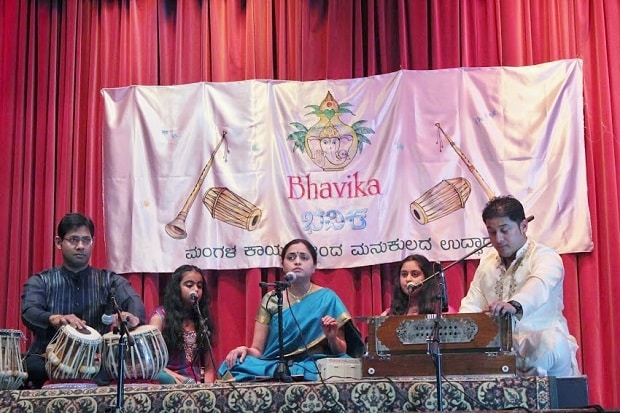 Well-known singer Aparna Nagashayana’s charity performance on Saturday 2 August, fundraising for charity, was a wonderful evening on many counts. I have known Aparna for a long time, but she is also well established among the Indian community in Sydney. She runs a music school, Bhavika, and trains the next generation of Indian Hindustani singers. Her accomplished compositions for the musical ‘Devdas’ are already popular across Australia.

Aparna’s performance at Strathfield Town Hall was held in memory of her father Pandit D.S. Garud, who himself was a well-known and much revered musician in India. Pandit D.S. Garud composed hundreds of songs and trained hundreds of students who practise and perform today. Indeed Aparna comes from such a rich family of artistes as Pandit Garud was the son of Kannada theatre giant Garud Sadashiva Rao.

This year marks the birth centenary of Pandit D.S. Garud, and it is being celebrated across India. This concert evening was a contribution to his memory by his youngest daughter, Aparna, through their shared dedication to music. What better dedication could one hope for from their offspring!

The evening’s program was filled with compositions by Aparna’s father, Pandit Garud, and her family. Even more special was that Aparna’s two daughters, Gargi and Dhatri, supported her singing, filling the audience with happiness to see the family tradition continue.

Aparna aptly started the first part of the evening with the Kannada song ‘Purva Kalyan’ heralding the arrival of the Guru. It was followed by the elaborate and wonderful rendition of raga ‘Kalavathi’ set in vilambit Ektal. The rendition then moved onto a traditional composition in Roopak tal and finishing with a lively composition ‘madhura madhura murali bhajaavat’ in Teental. Without a shadow of a doubt, she enthralled the entire audience.

The second part was filled with songs which resonated with me because of their affinity to theatrical music. The compositions were much more dramatic and stretched the range of classical music’s elements to bring the emotion of the songs to the listeners. The deeply expressive, playful and lyrical songs in ragas Pratheeksha, Mishra Maand, Jhinjoti and finally in Malkauns were all eminently rendered by Aparna.

In the current troubling times, with conflict in Ukraine and Gaza, the plight of Sri Lankan refugees, and sexual attacks in India, the evening was a retreat into quiet and peaceful solace.

Given that this was the birth centenary memorial for Aparna’s father, Pandit Garud, who was born in the same year as the outbreak of World War I, the evening tied together a multilayered response to the times we live in.

The evening brought the music of a previous time into this troubled century.