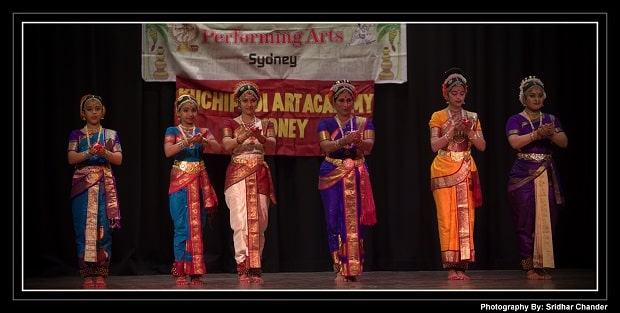 It is a rare and special thing when a person’s influence over an art form reaches far across the globe and brings together artists from across generations. Dr Vempati Chinna Satyam held such influence over the South Indian classical dance form of Kuchipudi. Hailed as a visionary, he revolutionised the discipline in the mid-1900s and was instrumental in the recognition of Kuchipudi as a classical dance form. A dancer and a teacher, Dr Chinna Satyam choreographed almost 180 solo items and 15 entire dance dramas, many of which are still performed frequently the world over.

Recently, an inspired group of dancers came together to honour Dr Chinna Satyam in a way that would surely have made him proud, with a Kuchipudi recital they called Natya Sumanjali. Held at Marsden High School, the repertoire was diverse and consisted of performances from dancers who wished to celebrate his life, two years after his passing. Together, Shobhana Kambhammettu (who was also on the organisation team), Vanaja Dasika, Aruna Iyengar and the young and astonishingly talented students of Venkata Ramana, educated the Sydney audience a little more about Kuchipudi. Behind the scenes, it was the members of Kalabharathi Performing Arts and Kuchipudi Art Academy of Sydney who brought these dancers together to present this recital to a full auditorium. Entry to the show was free, and any proceeds were donated to the Sri Venkateshwara temple in Helensburgh.

In keeping with tradition, the first item was a tribute to Lord Ganesha, Gaja Vadana, presented by Shobhana and Vanaja. It was an excellent way to begin, both dancers talented and obviously passionate performers. Another standout piece was Vanaja’s Marakatha Manimaya in praise of Lord Krishna, and this is where the expressive dancer’s story-telling abilities really shone. Precariously balanced on a brass plate and relying solely on precise footwork to stay balanced, Vanaja beautifully displayed a form of dancing that is unique to Kuchipudi.

Shobhana too showed a flair for connecting with the audience, presenting the solo piece Bhama Kalapam in her refined, graceful manner. Young Aditi Gunturu, Saakshi Manevalil and Swetha Puthi were involved in Brahmanjali and Aditi and Saakshi in the Jathiswaram, displaying a finesse that was beyond their years.

Each item had been intricately choreographed by Dr Vempati Chinna Satyam. In her speech, Shobhana labelled the Guru’s choreography as something special, describing how her previous contact with him influenced her profoundly, changing the axis of her way of thinking. Guru Anandavalli, one of Sydney’s prominent classical dance figures, gave a heartfelt speech, sharing personal stories of Dr Chinna Satyam’s positive impact on her dancing and her life. It was at that moment that many audience members truly understood the effect that the great dancer and teacher had on the people whose lives he touched.

Indeed, Dr Chinna Satyam was a man who was widely loved and is deeply missed. Aside from the choreography, a common thread that ran through the recital was that almost every dancer had experienced the joy of either learning from, or meeting, Dr Chinna Satyam through their dance careers. This brought a deeply personal touch to the evening, and it was nothing if not from the heart.

The recital ended as all good classical recitals should, with a vibrant Thillana. Shobhana and Vanaja continued to pay tribute to one of their most influential teachers while farewelling the audience and completing the evening’s performance. Their pleasure in being able to partake in such a special tribute was evident and the evening concluded, as it should, on a joyously dynamic note.