A garland of ragas for Saint Thyagaraja 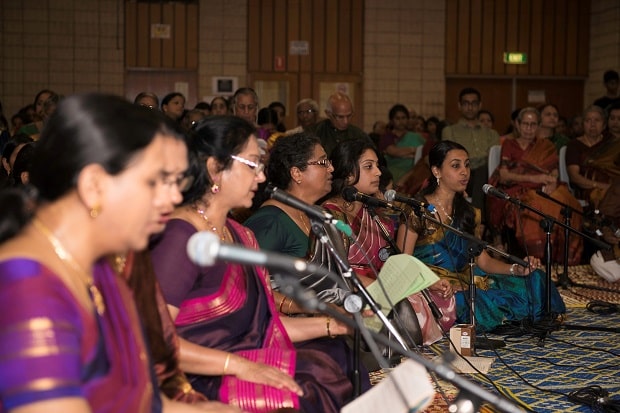 The 31st Thyagaraja Aradhana, celebrated on February 22 and 23 at Dundas Community Centre was, by any yardstick, a resounding success.  Any organisation that reinvents itself year after year without succumbing to commercial sponsorship, has stood the test of its sense of purpose and longevity. The Sydney Music Circle (SMC) has done precisely that, thanks to a dedicated team of volunteers and rasikas.  The essence of a Thyagaraja festival is by tradition, the group singing of the Pancharatna Krithis as a vehicle to pay homage to the patron saint.  For the first time, part of the Sydney event was webcast ‘live’ to a global audience and rasikas from as far away as Toronto, San Francisco and Chennai tuned in. The live webcast was provided courtesy of Parivadini (http://parivadini.in/) a Chennai based organisation. SMC has thus acquired the status of a global player in the field of prominent Carnatic music promoters.

The brains behind SMC proved that they have become a classic example and trendsetter of the renaissance enjoyed by Carnatic music. Nearly a hundred home-grown performers between the ages of 5 to 80 occupied the stage during the two day festival, and the audience numbers varied between 500 – 600 despite a parallel attraction at the Helensburgh Temple which was celebrating Shiva Mahotsavam at the same time.

The organizing team had announced this year’s festival theme as Raga Rathna Malika, wherein the registered participants had to choose their item from Saint Thyagaraja’s creations based on ‘Melakarta Ragas’.  It was a daunting task for several of the amateur artists who had to choose from rarely sung krithis from the Melakarta Chakra such as Kanakangi, Vanaspati, Jhankaradhwani, Gangeyabhushani, Shadvidamargini and Manavati.  It is a great credit to all the performers and their ‘music gurus’ who prepared and delivered a musical feast. Saint Thyagaraja is well known to be an ardent ‘Rama Bhakta’ and some of his compositions do not shy away from asking questions of his deity, much as he created a devoted community to Lord Rama. An aura of spirituality pervaded and inspired the young and old alike, during the festival.

Thyagaraja Aradhana is the flagship event and each year the community rallies round to support the SMC’s call to celebrate the great patron saint.

The organizers depend completely on donations on a voluntary basis from the Sydney audience and they have never yet been short on funding during the life of this musical group.

Starting with just two aficionados of Carnatic music in 1983, the SMC has remained apolitical with a view to solely devoting its activities to furthering the interest of a growing community and nurturing local talent from Sydney and its surrounds.

The SMC organisers have introduced several new initiatives to broaden the base of Carnatic music.  One such effort is devoted solely to encouraging fresh blood and is called the Yuva Kala Bharati aimed at the under-15 age group with some basic accomplishments. This initiative brought together 45 young musicians and accompanying artists. Their website has evolved to be a one stop shop for those seeking musical training, finding teachers for prospective students, and includes a calendar of events through the year.

To all intents and purposes, the SMC contributes significantly to keeping our art and cultural heritage alive and well.