A feast of classical music 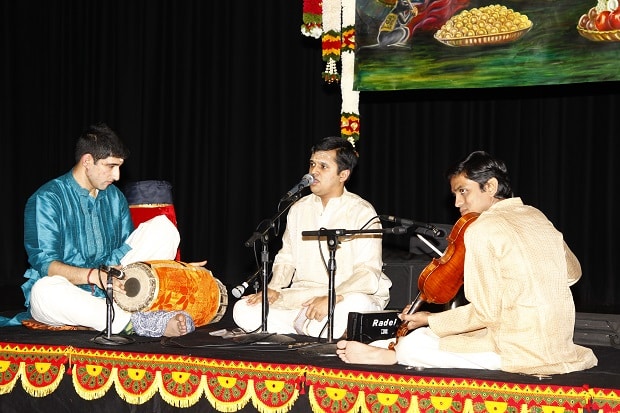 Vignesh Ravi’s mrudanga arangetram was held at the Rowville Secondary College recently. Vignesh is the student of Sridhar Chari, and has regularly been seen at various music school concerts, accompanying student vocalists and instrumentalists over the years. The young percussionist began preparing in earnest for his debut solo concert a year ago, which included an entire December music season spent listening to classical music in Chennai. He already guides and teaches a group of young students at his guru’s Laya Vidya Centre.
The vocalist and the violinist for his arangetram were well known musicians from India, viz Saketharaman and Nagai Sriram respectively. Saketharaman, a young musician, is the sishya of the late violin legend Lalgudi G Jayaraman, and if Vignesh was daunted by the challenge of accompanying such a well-known and virtuoso vocalist, he did not show it. He was calm and collected, and did not once feel overwhelmed by the pace or the complexity of the rhythms that he was asked to present.
Saketharaman began with a varnam in raga saveri and set the bar quite high from the outset; that he could take a well-worn varnam like this one and tweak it to give it that freshness and originality, is a mark of a great musician. This was followed by the well-known kriti Vallabha by Dikshitar in raga Begada, and a Tyagaraja kriti in Pantuvarali raga. They were both delivered with superb skill, and the kalpana swaras, a hallmark of the Lalgudi bani, were in a class of their own.  Vignesh ably supported the musicians and his sense of tala was flawless. The centrepiece of the evening was a rendition of the raga karaharapriya, followed by the popular Tyagaraja kriti chakkani raja marga, and concluding with a cascade of kapana swaras.  Vignesh gave able percussion support, and the tani (solo mrugangam) that brought up the end of this item showcased his skills splendidly. The concluding items were all well supported on the mrudangam, and Vignesh finished on a triumphant note to what was a wonderful and enjoyable arangetram.

InConcert Music presented a thrilling double bill on September 14 at the Wellington Secondary College, with Nagai Sriram treating the audience to more than an hour of soothing and lilting violin music. He was accompanied by Sridhar Chari on the mrudangam and Ramanan on the kanjira. This was followed by a superb jugalbandhi by two of the most renowned instrumentalists in the Carnatic and Hindustani traditions; Nirmala Rajshekar on the veena and Gaurav Majumdar on the sitar. They were accompanied by the star mrudangist Tanjavur Murugabhoopathy and Australia’s own young Kishan Jayendran on the tabla, who has spent some time learning from the maestro Alla Rakha.
They began with a lively and melodious bandish in ragamalika, and the hall reverberated to the double strings of the veena and the sitar, quite distinct in many ways. Nirmala Rajshekar’s full use of the bass strings in the veena was a pleasant counterpoint to the high pitched sounds of Majumdar’s sitar; her deliberate, unhurried rendering of alapana on the veena was a delight for music lovers, influenced, no doubt, by her Hindustani counterpart. When they played compositions together, it was fully synchronous and there was excellent understanding between them even in the more creative and free flowing segments like the kalpana swaras and gath. Their rendering of Dikshitar’s composition Siddhi Vinayakam in shanmukhapriya preceded by an exposition of the raga was superb. The bhupali-mohanam in mishra chapu that followed was a masterpiece, as they took the presentation of this raga to new heights! Kirvani/Keeravani was the concluding piece, and the percussion duet at the end was exhilarating: the mrudangist and the tabla layer treated the audience to a rhythmic feast, weaving rings round each other. This was one of the most delightful concerts we have had in Melbourne in years!