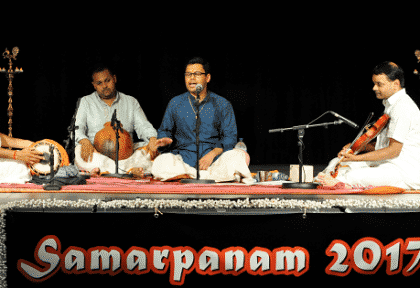 I am sitting in the audience of a Carnatic concert, a stranger in a familiar land.


It has been awhile since I have attended a proper solo ‘kutcheri’, or full-length concert – in fact, it’s been some time since I’ve thought of myself as ‘one of’ the South Indian classical music community in Melbourne, despite having learned Carnatic singing within that community since age four. So I’m not sure how I’m going to think or feel. Insider or outsider?
However, what I cannot doubt is this: here is art dovetailing itself easily with life: a group of artists using their art to raise funds and awareness for two urgent causes: the Ovarian Cancer Research Foundation, and the Australian Medical Aid Foundation, which works toward helping Sri Lankan communities rebuild after the civil war.
On stage is young Melbourne-born and raised vocalist Pragadeesh Shamugarajah, trained in Carnatic music in Melbourne under Jayashree Ramachandran. He’s also a mrdangist, training in that art form under Ravi M Ravichandhira, also in Melbourne. His accompanists are well-known expert figures in the Melbourne Carnatic music scene – Murali Kumar on the violin, Balasri Rasiah on mrdangam, and Hariharan Balasri on ghatam.
Pragadeesh’s connection to Samarpanam is a personal one. The concert is dedicated to the late Kandiah Thangarajah OAM, a well-beloved and influential member of the Tamil community, who had asked him to undertake a fundraising concert, a request that could only be fulfilled posthumously. So, in fact, the artists and their art tonight are profoundly connected to both life and death.

I perk up at the opening song, ‘Pranamamyaham’ in Gowla raga, by the astonishingly long-lived (near a hundred years!) Mysore Vasudevacharya, because it is a composition I can remember learning. Pragadeesh’s improvised swaras (note sequences) are confident and creative, and this is something that continues throughout the concert. The ease of his exchanges with his accompanists, especially with Murali Kumar on the violin, catches my attention as well. But what strikes me most of all is the lack of manicure and careful shaping in his singing; instead he throws out a messy, spontaneous energy, and is unfazed by the risks of this approach. This is what makes his rendering of ‘Niravadi Sukha’, one of the most upbeat compositions of the revered nineteenth-century composer Tyagaraja, in raga Ravinchandrika, the highlight of the concert – his play with the swara sequence is exciting and keeps both the accompanists and audience guessing.
Pragadeesh has a lovely, soft timbre to his voice, especially in the lower register, and this was shown to advantage in his ‘Kartikeya’, a composition in Tamil by prolific and highly influential twentieth-century composer Papanasam Sivan, in the shadowy raga Thodi. When Mysore Vasudevacharya made a return in his most famous composition ‘Brochevarevarura’ in Kamas raga, Pragadeesh again displayed an unpretentious, playful comfort with improvisation.
I have reached a stage in my appreciation of live concerts where I am more in the mood to admire confidence, playfulness and independence, especially from young emerging performers. And so when Pragadeesh introduces the senior musicians around him as ‘fellow artists’, I grin in appreciation.
The concert raises over $3000 for each cause.
I can’t say how Pragadeesh would express his connection to Carnatic music. I myself feel somewhat ambivalent about it – on one hand, it pleases me aesthetically, on the other, I wonder about its contemporary relevance, depending as it does so heavily on religious lyrics, emanating from – let’s be frank – departed male composers who came from another time and place.
But his performance strikes me as a coming-of-age moment in the Melbourne Carnatic community: when art, life, death, creativity, exploration come together, and where a 22-year-old performer can hold his own and lend a new, energetic flavour to it.
Whatever I feel about Carnatic music now, these are things about it as a performing art that I will always be able to connect to.
- Advertisement -
Share
WhatsApp
Facebook
Twitter
Linkedin
Previous articlePicking Your Team
Next articleOnce stung, twice as deadly