10 Things You Can’t Miss At Parramasala This Weekend 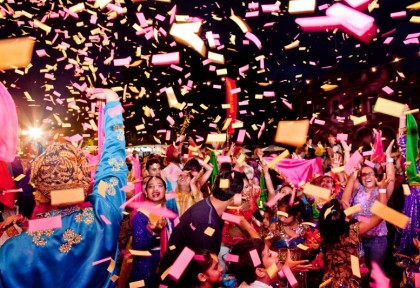 A free public celebration of the diverse and rich cultures in Sydney’s west, here are our must-see performances

Inspired by his own teenage experiences and the stories of others with a similar background, Bangladeshi-Australian sound artist Shoeb Ahmad explores the blooming of one’s inner sexuality, meditations on intimacy and exploration of personal relationships in im/modesty, a 60 minute sound work that uses a text narrative for three voices to guide the listener through a psycho-geographic trip of one’s sub-continental heritage, written for and manipulated from Indian electronic instruments, harmonium and percussion as well as field sounds recorded in southern India and Bangladesh.

WHAT HAPPENS AFTER MIDNIGHT IN PARRAMATTA

Urban Theatre Projects has commissioned Director Roslyn Oades to collaborate with five young people from the Parramatta area on the creation of a new work – What Happens After Midnight? This talk will provide audiences with a valuable insight into the collaboration and is a chance to hear first-hand about making a new work that is connected with the local area.

Jal – the Hindi word for water – is the essence of life, and the very core of this one-hour dance drama produced by Sydney-based Swastik Institute of Dance.
India-born renowned Kathak and Bollywood choreographer Sumati Nagpal creates a parched canvas on stage, populated with characters craving water.
Through poignant moves and expressions, the ensemble conveys its desperation before they find water and perform the dance of celebration.

Chenda is the traditional drum from the South Indian state of Kerala called the “Gods Own Country”.  ‘Chenda Melam’ is an essential part of any major temple festival in Kerala. IndOz Rythms brings this art here to Australia. Under the able leadership of Gurus Jayaram and Kuriakose.

Chinese Wisteria dances and performances portray the diversity of cultural elements amongst the Chinese national minorities, revealing the delicacy as well as the rusticity of Chinese folk dances.  It will guide the audience into the snowy lands, great desert regions, mountains and villages.  It will trigger the imagination; provide an appreciation of Chinese history and culture, adding enjoyment in the charm of Chinese folk customs.
Wisteria represents the beauty of the bright purple and blue flower which is as gorgeous as a rosy cloud.

The Three Seas combine elements of Indian folk music with a western style of song form in a band full of engaging performers from India and Australia. Listeners can expect a soulful, song-based repertoire with a diverse array of voices and unusual instruments…no tablas or sitars here.

The Western Sydney Migrant Story showcases the cultural dances, rhythms, music and costumes of people from all five continents of the world.
As Australian Indigenous artists pay homage to our common past, the spell binding finale to the Festival pays tribute to the journey of people from varied parts of the world who now call ‘West’ their home.
Coordinated by Ruchi Sanghi, an acclaimed Kathak Guru and teacher in Sydney, the production shall feature some of the very best dancers and community groups of Western Sydney.