One of the biggest tantrums parents of young children face is when their child cries, “But he/she is copying me.”

The Australian cricket-loving public seem to have a special love-hate relationship with Indian cricket captain Virat Kohli and with India due to spend some three months in Australia playing various forms of cricket under Captain Kohli, get ready to see some fireworks off and on the field. 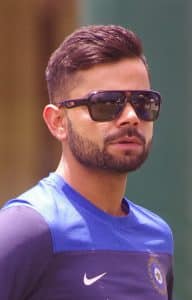 A love-hate relationship is one that is characterised by extreme conflicting emotions, or strong positive feelings as well as strong negative ones.

From the viewpoint of the Australian public, Virat Kohli often reminds them of themselves – of the attributes they possess, some of which they are proud, others which they will not talk about.

Kohli is a fierce cricketer who is not backward in coming forward. He is not averse to showing his emotions – his dismissal while batting is often due to his bad play rather than acknowledging the bowler; a dropped catch by himself or heaven forbid by one of his fielders is followed by muttered, presumably obscenities or a long hard look at the unfortunate fielder. No quarter is given to the opposing team and no mercy sought. His aggression is played out against all members of the opposition, be they the aggressive David Warner or Joe Root, or the more subdued Mitch Marsh or Tim Paine.

The Australian public loves his aggression but hates it when it is against one of their own. They love his raw emotion but hate his perceived lack of sportsmanship when he seldom acknowledges the opposition’s brilliance. They like his youth and exuberance but want him to show restraint in his public display as a senior member of the team. They want him to fail (which he did so spectacularly during the last series against Australia – 46 runs at an average of 9), yet secretly they want to see the brilliance of this batsman who is earmarked for one of the best ever careers in the history of cricket.

Kohli is an enigma they have not been able to understand.

What will be interesting to observe will be how the manic aggression of Virat Kohli is managed by the super polite, reborn avatar of the aggressive Australian cricket team post the ball-tampering judgement day. With a number of losses behind them as the Australian team heads into its clashes with India, Tim Paine and his men will no doubt by goaded by Kohli and the men in blue as they take to the fields.

With Cricket Australia in near-total disarray, perhaps the naked aggression of Kohli may bring out the mongrel in the Aussie cricket team and be the catalyst to fire them up.

If not, we are in for a boring, uninspiring summer of cricket with Kohli and his team in total control. Perhaps by end of the series, Kohli will have picked himself some more critics as he leads India to a whitewash win in Australia. Or admirers if he transfers his talents of belligerence to the Aussies.