Khaled Hosseini’s latest offering has a few gems but less of the power and subtlety of his past novels, writes BHAVIN RAVAL 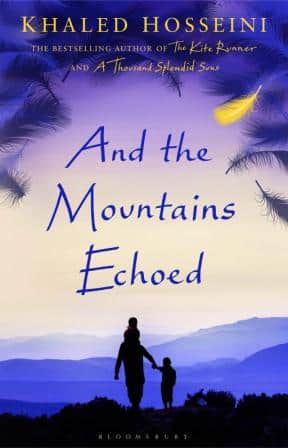 Have you ever sat in a desert, on a moonless night, listening to the tunes of the sarod emanating from a dimly lit home in distance? In the company of solitude, stars and symphony? Or can you imagine yourself being in such a milieu? The pace of time assumes elasticity when this happens. A sculptor monographs your heart. And senses. And sentiments. Not with a chisel, but with a feather.  And without losing the perpetuity of that lingering feeling. This is what one feels when reading the recently released And the Mountains Echoed by renowned author Khaled Hosseini, published by Bloomsbury.

This is Hosseini’s third novel and there are some jewels interspersed in the pages. The rhythmic and phonetic translations have helped to make the imagery vivid. The fragrance and moods of the soil have been well captured. In between, Hosseini twirls and un-twirls strings of the reader’s heart. Arguably, quite akin to Beethoven’s rendering of Ode to Joy in the ninth symphony. And, at times, akin to rendering of Pathetique. The pendulum sways with varying speeds, varying stops and varying moods.

However, the journey to serenity is rather laboured at times, and the reader has to take solace in the brilliant beginning, soulful ending and some form of oasis in between. Any book that starts with a Rumi couplet is bound to raise the reader’s expectations.

The earlier books by the same author – The Kite Runner and A Thousand Splendid Suns arrived like comets, but ruled like planets. They seemed beyond the reproaches of laws of diminishing returns. There was a hiatus of almost six years till the smells and splendours of Afghanistan reached us again in And the Mountains Echoed. Crescendo was the benchmark of the earlier books and probably the expectation of this again has the impact of spraying the reader with the dampness. And sustained dampness, at that!

In terms of the plot, the DNA of this book and the previous two are from the same fabric, have the same texture, so And the Mountains Echoed breeds familiarity. Rather, predictability. In a nutshell, it is a story of a brother and a sister whose separation is ‘compelled’ by economic circumstances and, of course, the stepmother. The story sprawls over decades, cultures and continents. In the end, do the siblings meet? If yes, how and what is the emotional quotient? If not, why? In between there are sub-plots as Hosseini takes a detour and forays into an European by-tale. Perhaps the objective was to avoid being typecast as an Afghanistan specialist. Or he might be preparing to step into a literary backdrop sans Afghanistan in his next project. The subplots, often told in a first-person narrative, sound disjointed. Some of them start in a kneejerk manner. Ambiguity seeps in and lingers on. But at the cost of lyricism and lucidity, which have been the hallmarks of the first two books by the author.

The book is better than average if considered without the legacy of earlier two books. But in their wake, And the Mountains Echoed assumes a tired look.  It is apt to end this piece with a Rumi couplet.

‘We are as pieces of chess engaged in victory and defeat:

our victory and defeat is from thee, O thou whose qualities are comely!’

Music to our ears