Song, dance, mimicry and much more made this show a resounding success, says PRIYANKA TATER 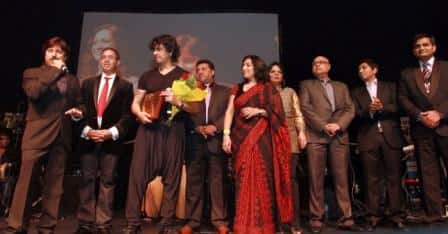 Sonu Nigam has often said in interviews that if not a singer, he would have been a scientist…in that case the music world would have experienced a huge vacuum!  For someone who unabashedly took to the stage at just 3 with a rendition of ‘Kya hua tera vaada’, the song that got Mohammed Rafi his first and only national award, music was destined to happen. This talented musician had his share of struggles before finding a foothold in the Bollywood music scene, but the hurdles made his success taste even sweeter.

And here I was at the Sydney Olympic Park, ready for the man who is known as the bridge between the legacy of the past and the power of today – Sonu Nigam!  The queue outside the gates snaked around for almost half a kilometre, an indication that his two previous performances in Sydney hadn’t wearied his fans, who managed a full house yet again.

Though initially it was a screechy-sounding high-pitched Sydney-based anchor who made most of us miss our earplugs, thankfully Sonu Nigam had included an MC in his troupe for the rest of the evening. After an initial performance by dance group Road to Bollywood, and some sensational singing by US-based singer Gunjan, the magic voice of Sonu Nigam filled the air with very tempting teasing mix of ‘Kal ho naa ho’ and ‘Shukraan allah’. Then Sonu walked in, dressed in black harem pants, a figure-hugging black t-shirt and a jacket, crooning the latter half of that song from Kurbaan, followed by ‘Rab raakha’ from Love Breakups Zindagi. Claps, whistles, and swooning young girls greeted the star. He returned the favour with a quick “Salaam, Namaste!”, telling the crowd that he would sing first and then chat. And with that he launched straight into ‘Mera rang de basanti chola’ from the Legend of Bhagat Singh, his favourite for the past 10 years.

Now you may have heard Sonu Nigam’s songs on CDs, in movies and on the radio, but his true potential is when he performs live in concert. Not one of his songs sounds the same. The variations are unbelievable, the notes, pitch, harmony, melody, rhythm – Sonu simply makes magic on stage, as if his raw energy creates different works of art each time he performs live.

From ‘Gum sum gum sum rehnewaali’ (Dabangg) to Phir milengey chaltey chaltey (Rab ne bana di Jodi); from To aaja tu hai pyaar mera (Teesri Mazil) and ‘Mere sapno ki raani’ (Araadhana) to ‘Bachna ae haseeno’, Sonu Nigam treated the crowd to some non-stop evergreen classics. He even asked if the audience was game to continue until 6am, then quipped about the arena belonging to his ‘chacha’, inviting peals of laughter yet again!

On ‘Bole chudiyaan’ (Kabhi Khushi Kabhi Gum) and ‘Mahi Ve’ (Kal ho na ho), the crowd let down their hair and danced right in front of the stage. And ‘Saathiya’ got the audience into singing mode.

From singing to rendering the beautiful sufi song ‘Tu hi tu satrangee re’ (Dil se) to his unique introduction of his band, Sonu Nigam proved yet again that he ain’t just a singer, but a performer and a mesmeriser.

He then reminisced about his musical journey to fame, in a conversation with the audience. Sonu recalled how it’s been 21 long years in Mumbai since he started his musical career, and despite only cricketers and movie stars getting all the accolades and fame, he was lucky enough to break that norm. His third trip to Sydney is proof that music connoisseurs love him.

“Everyone’s taste is different, so I am trying to incorporate as many songs to cater to everyone,” said Sonu Nigam and he stayed true to his promise. From soft melodies, dance hits, sufi music and his extremely popular album song ‘Tujhe laage na najariya’, the maestro showed a taste of his versatility.

Yes, Sonu Nigam is not just a singer, but a great host, performer and mimic too. There was not a dull moment with the legend putting in his heart and soul into entertaining the music lovers around him.  Be it the extremely soulful ‘Tanhaai’ (Dil Chahta Hai) or ‘Tera jadoo chal gaya’, he made melodic montages of as many songs as he could. After nearly 3 hours of a non-stop performance, this bundle of talent was still bubbling with energy when he asked us “ You are not tired…aal izz well?” – and we knew exactly what treat we were up for next!  Sonu made the original song in the movie sound like a miniature version of the one he sang on stage, with all his antics and creativity!

And then he still had the energy to cater to all the requests of songs in Kannada, Gujarati, Marathi, Punjabi, Bengali etc. Through just a couple of lines for each, he tried to please everyone and was successful at that.

Of course ‘Sandesey Aate Hai’ (Border) gave me goosebumps while his record-breaking song from Tees Maar Khan in 54 different voices simply bowled me over yet again.

And then came his classic from the new Agneepath, ‘Abhi mujh mein kahi baaki’ which he sang only after making us realize how good we had been as an audience!

“After almost 3 hours of singing this song is very difficult to croon. I only sing this song when I feel the audience deserves it,” he said, and we were blessed!

Come to think of it, its difficult to pen the number of songs he sang, but the final master stroke of ‘Kal ho na ho’ was a fitting finale.

Now this review may appear over eulogised, but with good reason. After having seen a number of stage performances by various other artists and maestros, I never could differentiate much between their recorded versions and their live ones. But with Sonu Nigam adding that extra dose of all those impromptu variations and the novelty in his music, I was thankful to be at his concert.

Three cheers to the organisers Cine Starr for making it a success, the third time around. Though I sincerely hope that next time, music lovers attending are not just restricted to the Indian community. After all, music transcends boundaries and the world needs to look beyond AR Rahman.

The fire still burns… at 80