Home Books Why I Am A Hindu: Shashi Tharoor’s new book

Shashi Tharoor’s new book on Hinduism — the religion followed by a majority of Indians — comes at a crucial juncture when there is an upsurge in fringe elements that practise and propagate the ideology of Hindutva.

The book, therefore, was being thought of as Tharoor’s response to Hindutva.

However, limiting “Why I Am A Hindu” to the debate between Hinduism and Hindutva will be a grave injustice to this riveting offering as the book is much more than the sum total of this debate.

At the onset, it is a layman’s account of his journey of discovering the “extraordinary wisdom and virtues of the faith” that he has practised for over six decades.

Tharoor himself makes it clear in the Author’s Note that he is neither a Sanskritist nor a scholar of Hinduism and, thus, did not set out to write a “scholarly exposition of the religion”.

The book comes across as the author’s attempt to understand the religion that he follows, calling it a self-discovery of sorts will be accurate.

Tharoor’s exposition travels between personal accounts and his understanding of the religious scriptures as well as the values propagated by the likes of Swami Vivekananda, Ramakrishna Pramahamsa and others in the league whom he refers to as the “Great Souls of Hinduism”.

It is thus imperative for the reader to have a clear state of consciousness before setting on to read the book because more than anything else, it is about Hinduism, a religion, and religions are, after all the reasons behind most conflicts.

The book is divided into three sections, the first of which is titled “My Hinduism”.

This answers the question raised by the title of the book: Why I Am A Hindu? Admitting as sincerely as is expected of a liberal intellectual as Tharoor, he sets the record straight and confides that he is Hindu “because I was born one”, and goes on to elaborate that religion is selected for most people at birth, “by the accident of geography and their parents’ cultural moorings”.

But this analogy is not to suggest that he is not a proud Hindu.

“I was never anything else: I was born a Hindu, grew up as one, and have considered myself one all my life.”

The section talks at length about Tharoor’s early days, highlighting how his personal understanding of the religion developed with time.

“My Hinduism was a lived faith; it was a Hinduism of experience and upbringing, a Hinduism of observation and conversation, not one anchored in deep religious study,” he points out.

The section also explains at length what he calls “My Truth,” where he describes the reasons why he is “happy to describe” himself as a “believing Hindu”, before going on to present a fair perspective on the values propagated by the “Great Souls of Hinduism.”

The second section is titled “Political Hinduism” and this is where Hindutva comes into play.

It is interesting to note that the author takes 140 pages (about half of the book) to reach to the burning debate of our times and in doing so, he succeeds in providing a background on his belief of the religion, supplemented by the values propagated by the likes of Swami Vivekananda before explaining Hindutva.

He begins this section by providing a clear distinction between Hinduism and Hindutva. For Hinduism, he presents an imagery of a banyan tree, in whose shade, “a great variety of flora and fauna, thought and action, flourishes”.

From here, he moves to the Rashtriya Swayamsevak Sangh (RSS), the Vishva Hindu Parishad (VHP) and its ideologues — Vinayak Damodar Savarkar and M.S. Golwalkar, explaining their perspectives on Hindutva.

Using original quotes, he mentions Savarkar’s assertion: “Hinduism is only a derivative, a fraction, a part of Hindutva.”

The book then moves, at an incredible pace, to the advent of Deen Dayal Upadhyaya and the Bhartiya Jana Sangh and then to the Bharatiya Janata Party.

Tharoor then devotes 40 pages decoding the philosophies of Hindutva — not as he perceives it but exactly how its ideologues propagated it. 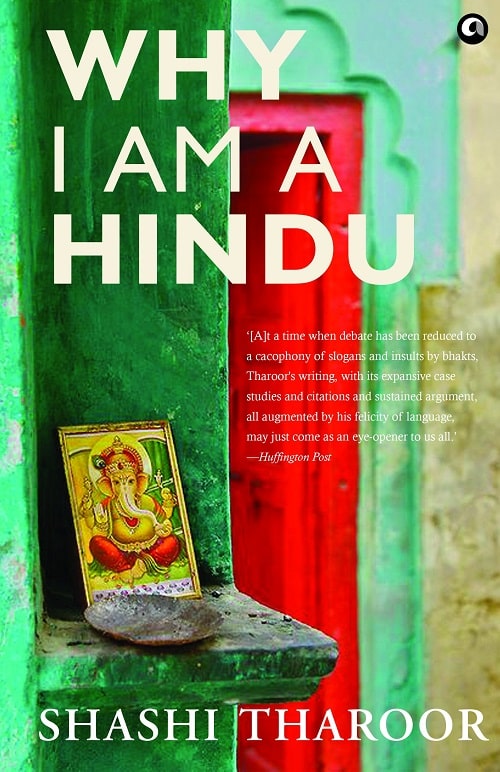 Contrary to all expectations, he does not criticise them or counter their views, at least at this stage.

It is from page 183 of the 302-page book, that he unleashes a storm of arguments on “the politics of division” that has led to “a travesty of Hinduism”.

Next, the author eloquently elaborates on the uses and abuses of Hindu culture and history in the contemporary scenario, resulting from “the politics of division” that he early mentions.

The 28-page-long last section of the book is all that he spends on addressing what most would have expected from the entire book: “Taking Back Hinduism”.

Beginning with a reference to former US President Barack Obama’s speech where he mentioned that “India will succeed so long as it is not split along the lines of religious faiths,” he elaborates on the “travesty of Hinduism” in the contemporary times.

Tharoor is brutal in his criticism of the saffron brigade but equally accommodating when it comes to presenting their views.

“Why I Am A Hindu” is a well-researched exposition and is yet a charming personal account — and it floats seamlessly in rich prose and diction synonymous with one of the most widely-read and revered authors of our times.

The ‘New India’ we seek