A Tamil dance troupe holds the audience in thrall 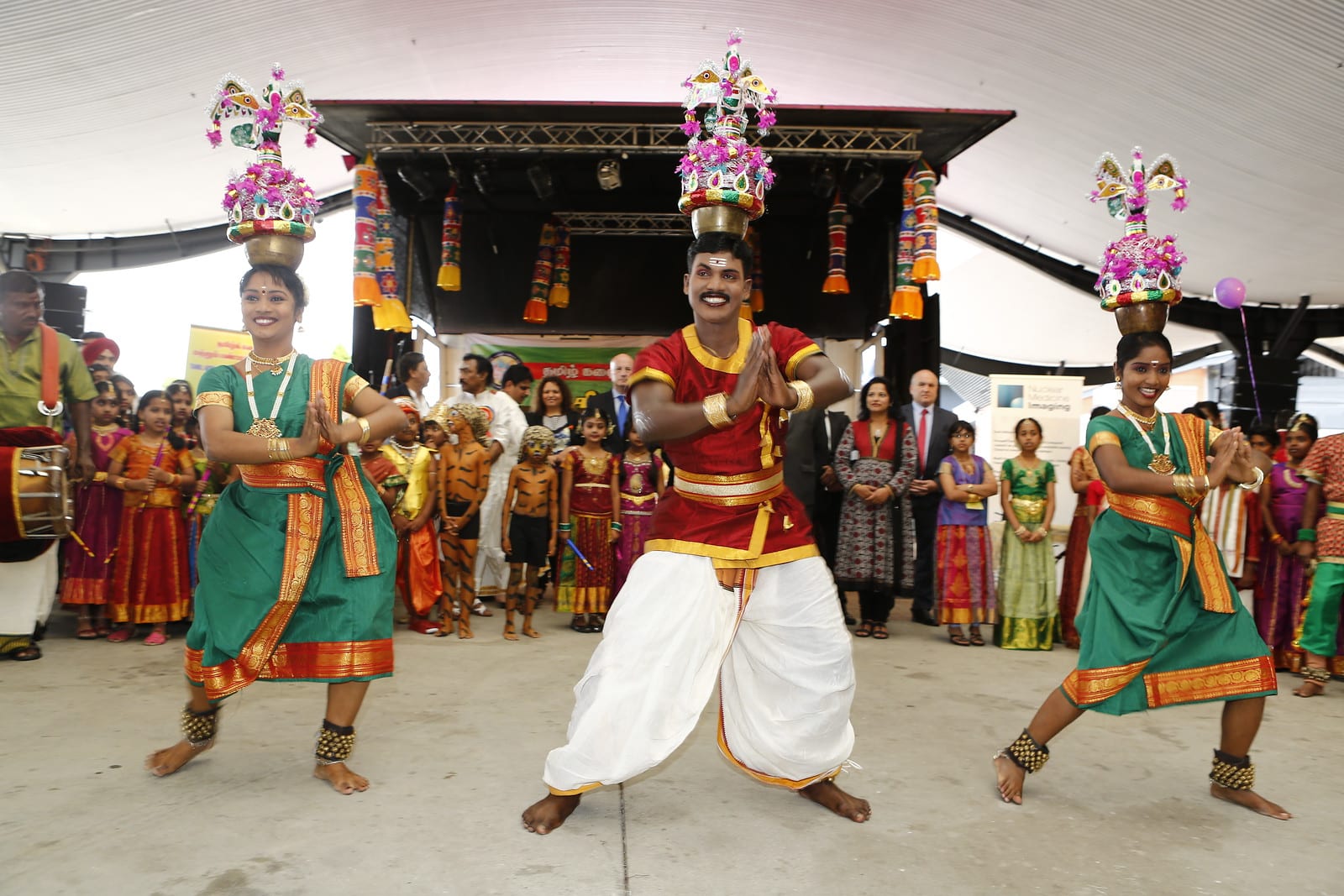 What a performance. What a show. The Tamil Nadu State Academy of Folk Arts, headed by their Chairman Mr Deva and with 20 performers, presented an evening of music, song, dance and acrobatics in a non-stop spectacular where the tempo rarely touched the ground. This was a unique event, one of a kind, and regrettably rarely seen in Australia.

Tamils see their language as being inter-twined with their folk arts and there was even a reference to ‘life arts’ to explain this notion. It’s not surprising therefore that Tamil Nadu has a proud history of supporting its folk arts. So much so, that it was the former Chief Minister of Tamil Nadu Ms J Jayalalithaa who had the vision to allocate the funds to make this tour possible. Locally, the Charles Sturt Council also provided financial support.

I had the pleasure of meeting Mr Deva prior to the performance. When asked as to what the dreams and aspirations of the group were, he responded by saying “to spread the folk arts of Tamil Nadu to the world – that is what we dream about”. It was surely the vision of a dream on display before us.

Music was provided throughout the evening by four musicians, two on the nadhaswaram, the wind instrument, and two drummers playing the thavil and the nayandi melam. The incessant drum beats were a big feature of the show. At times sounding warlike and providing a loud pulsating rhythm, they provided a strong backbone for the entire evening.

The first dance of the evening was Mayilaattam, the Peacock Dance. The stunning costume worn by the dancer even had full-size peacock feathers that opened out in a full fan. The rhythm of the dance often saw the peacock hopping about and dancing in bird-like fashion much to everyone’s admiration.

Several other memorable dances were to follow. Women have been fetching water from wells since time immemorial so it’s not surprising to see the Karagaattam or Pot Dance featured here. The two ladies and a male dancer made dancing with pots on their heads look easy. One dancer even started with the pot on the back of his head and shifted it along to the top of his head even as he danced.

The Poi Kaal Kuthirai Aattam or the False Feet Horse Dance really was beautiful. A mare and stallion maybe, but to me they looked more like a bride and groom. Somewhat shy, a bit of flirting and prancing and dancing on stilts. The dance to the Goddess Kali, Kaliaattam, displayed the perfect, scary image with four pairs of arms. This dance, full of power and menace ended with entrails of the demon spilling on the floor. 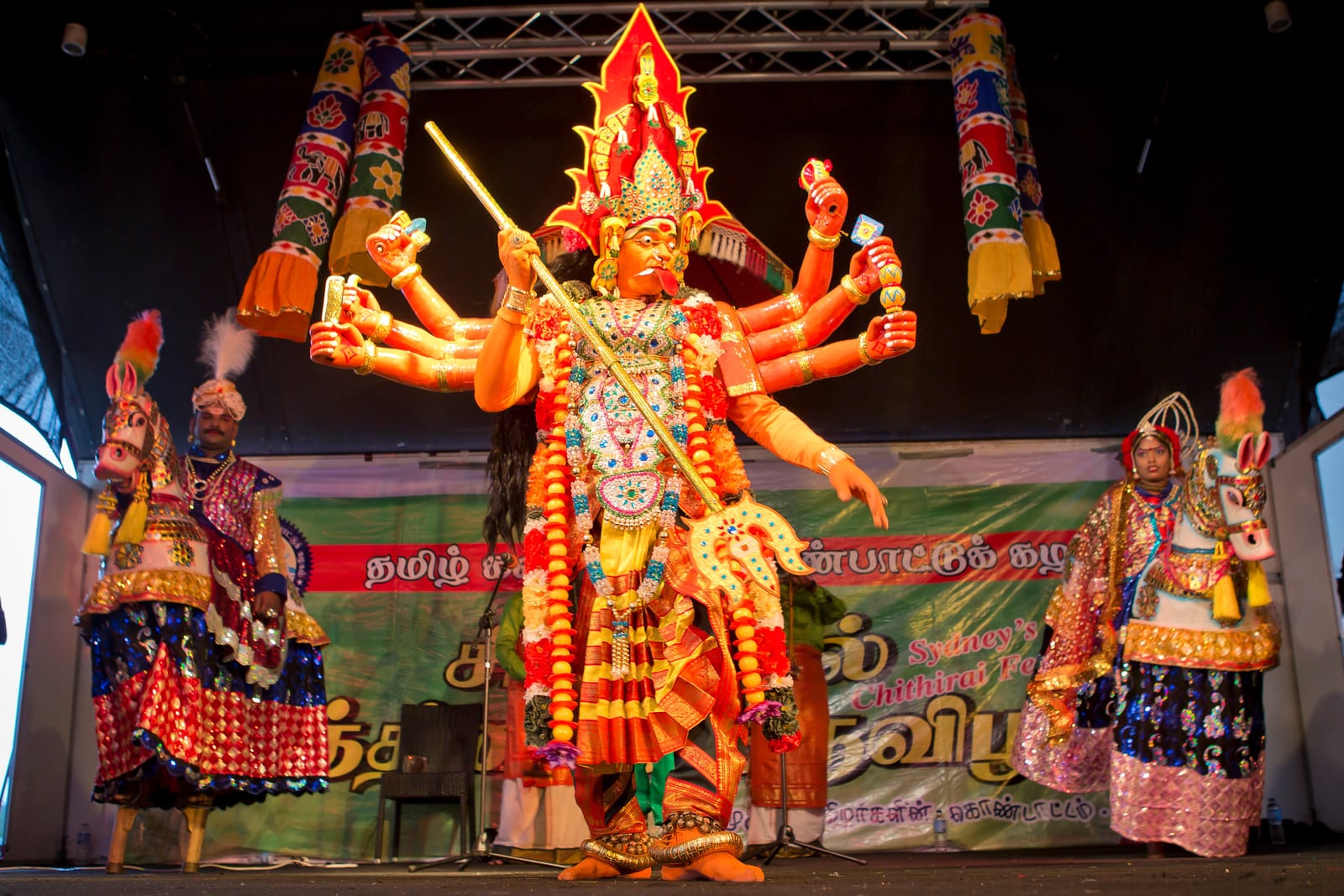 Ms Meenakshi and Mr Deva sang folk songs of love and devotion that were instantly recognised and applauded by all.

There were many memorable items. One dance of strong men performing some acrobatic movements set to wild drum beats had everyone rocking. The dance and the urgency of the drums soon had members of the audience including invited dignitaries being drawn, as if by magnetic force, onto the stage. The audience had become performers – the best testimony to a successful performance.

The event was organised by two young ladies, Apoorva Raj and Aswini Chettiar and thanks go to them. As the evening moved on it was becoming clearer that Dr T Somasundaram, who was described as ‘the man behind the evening’ by Lawrence Annudurai, President of the Adelaide Tamil Association, was clearly the heartbeat of the whole show. He had risen to the challenge and put on a great show. One of high energy, glittering colours, strength and grace – one that will be remembered for long.