He was one of 12 finalists who shared their science stories at the 2018 National Final held in Perth. His presentation, based on his own research, was about new treatments for heart disease.

FameLab is a science communication competition that seeks out young scientists and researchers keen to give their work a wider reach. It requires them to make a three-minute presentation in a compelling way, to a lay audience. The use of Powerpoints – or even scientific jargon – is not permitted: all they have at their disposal, is charisma and clarity. 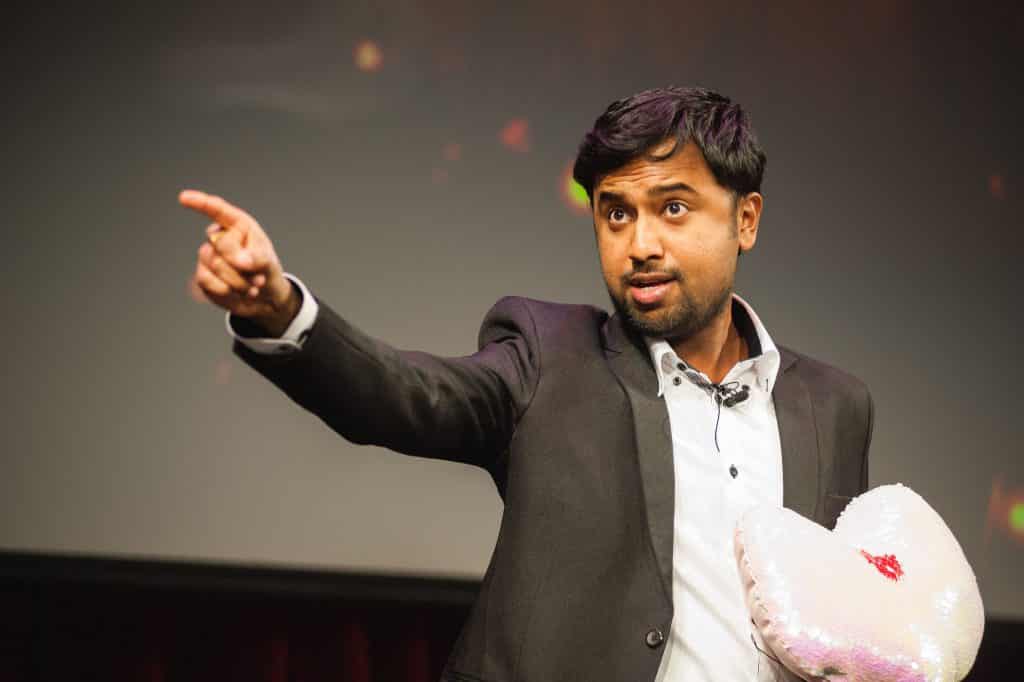 Talking about his work, Muthu told Indian Link, “Heart disease affects 1 in 6 Australians, and kills 1 person every 12 minutes. Heart transplants remain the only definitive treatment, but donors are limited and most patients die while waiting for a transplant.”

There are two other techniques of treatment to replace the 2-3 million heart cells are damaged in each heart attack. Both techniques however, have their shortcomings, Muthu recounted.

“In one procedure, heart muscles are injected into the damaged region, but the problem is they don’t stay put in the effected region and are known to migrate. In another technique, a patch, a kind of Bandaid containing heart muscle cells, is applied to the effected region, but the issue here is that the patch doesn’t align effectively enough with the damaged parts, leading to poor healing.”

“My research involves the design and development of material that can be used as the patch. Specifically, the patch must have grooves on its surface so that it can snuggle along the groves of the surface of the heart, align effectively and seal the damaged region.”

Currently in his second year of PhD at Monash University’s Materials Science and Engineering Department, the 29-year-old has so far has successfully 3-D printed the material to be used as the new and improved patch.

“With my supervisors Prof Neil Cameron and Dr Andrey Molotnikov, we collaborated with polymer scientists in France for producing an interesting material. We 3D printed and processed it, now we will grow rat heart muscle cells on it to study how they respond.”

To make his FameLab presentation ‘groovy’, Muthu used a heart pillow and an empty syringe and bandages to show the methods of treatment currently used.

“I was pretty nervous but the audience seemed to love it and that boosted my confidence. They responded to each line I spoke, indicating that they understood, and I am so thankful to them.

It was their polling, as well as the polling from an international live stream audience that got me my award.”

The Madurai lad finished his Bachelor’s degree in India and took a Masters’ degree in Malaysia before joining Monash just over a year ago.

“FameLab has been a rewarding experience,” he revealed. “I put in my application without knowing much about it and got through the state level. After that, the training by international trainers and communicators was simply wonderful and I felt as though I improved considerably. I also took feedback from friends, colleagues and supervisors and prepared some 30 versions of my script and multiple YouTube videos, optimising till the end.”

He added, “Listening to the other participants was fascinating. Networking with other early career scientists broadened my horizons and reinforced to me that science can be impactful to people’s lives and meaningful to society, but also interesting and intriguing in itself.”

Muthu has been a science geek since childhood. “Science has always fascinated me, and I realise now, looking back, that science communication has been an inherent passion. Even as a young kid, I loved looking up science facts such as why is the sky blue and not any other colour. And I wouldn’t stop there, I’d actually tell my friends about it at play.”

He seems like a perfect fit for a contest like FameLab. The largest science competition in the world, some 7000 early career scientists from the world over have participated so far. With partnerships with British Council, NASA and CERN, it has been going for 12 years now and has attracted participation from 30 countries.

Election handouts: What we could have done better